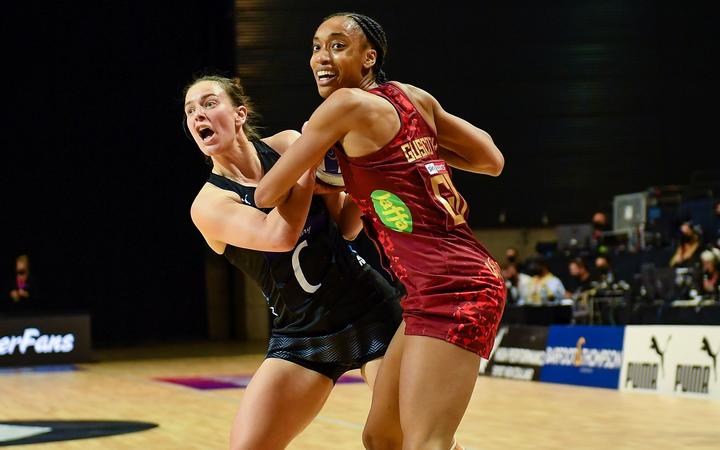 The England Roses upset the world champion Silver Ferns 49-45 in the final game of the Taini Jamison Trophy series in Christchurch on Thursday night.

Wins for the Roses against the Silver Ferns are rare. Back-to-back victories even more so.

The Roses’ 12th win over New Zealand in 103 games will be one that sticks in the minds of players and fans for a long time.

Backing up from their 10-goal win in game two on Tuesday, the Roses started quickly in the series decider, getting ahead by three goals in the first three minutes, before the Silver Ferns caught up to end the first quarter tied at 12-12.

The Roses were heavily penalised in the second quarter and the Silver Ferns took advantage of the visitors' struggles to surge out to a 10-goal lead (26-16) at halftime.

Cardwell’s introduction continued to pay off as her quick shooting style allowed her to thwart the Silver Ferns' defence and score a perfect 13 goals from 13 attempts in the quarter as the Roses outscored the Silver Ferns by 16 goals to 10 in the period. Cardwell finished the game 25 from 26 attempts.

Silver Ferns coach Dame Noeline Taurua persisted with the starting seven until midway through the third quarter when Kimiora Poi came off the bench at centre for Claire Kersten in an effort to disrupt the Roses’ resurgence.

Taurua also made more changes in the fourth quarter, introducing new players to the environment to try to turn the momentum the home side’s way but it did not work.

The Roses continued their second half dominance to win the fourth quarter by eight goals and lift the Taini Jamison Trophy for the first time.

Silver Ferns goal shooter Maia Wilson had her best game of the series. She did not miss in the first period of play - netting nine goals from nine attempts - and ended the game with 29 goals from 33 attempts.

The Silver Ferns were without their captain and vice-captain for Test as injuries hit the squad that had had limited preparation.

Captain Gina Crampton had an adductor strain which kept her out of both the second and third Tests, while vice captain Sulu Fitzpatrick hyperextended her knee during training.

Shooter Tiana Metuarau was also not available following a strain she picked up in the second test.

The Silver Ferns next games are against the New Zealand Men’s team in October in Hamilton.