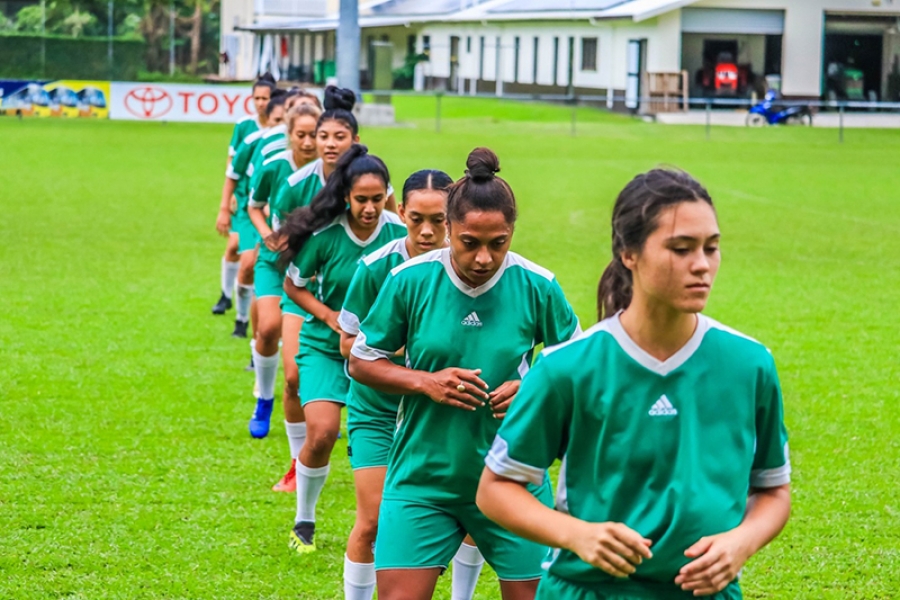 Members of the national women's football team training for the Pacific Games to be held next month in Samoa.

The Samoa Pacific Games is nearing and the intensity has picked up at CIFA for the national women’s squad.

The team has been preparing for the tournament since earlier this year and have achieved a lot since then. However, with just under a month to go they still have a lot of work cut out for them.

The team’s head coach, Judith Kuipers says they have been training hard in the fitness section and now her focus has moved to a tactical approach.

“I know that many of the players are used to a certain style of play from their club games however to achieve our goal I have been preparing them to play a more tactical game,” Kuipers said.

“My training sessions and games have been aimed at getting the team play a build up from the back style of play and maintaining possession of the ball for most of the match. By doing this we can hope to control the game and the ball better to hopefully win.”

The Cook Islands women’s team have found themselves in a difficult pool having to go up against some of the best teams in the Pacific such as Papua New Guinea and Vanuatu.

However, Kuipers remains hopeful and says they will still fight for a spot in the semi-finals and finals at the Pacific Games.

“Papua New Guinea will definitely be a challenge, nevertheless we will try to do our best to place as one of the top two teams in the pools. It will be a nice challenge for us but if everything goes to plan we should do well.”

Kuipers added that to help better prepare her team she will be observing other games as well and making game plans and tactical plays that could help the team beat their opponents.

The Cook Islands national women’s team won a bronze medal in the last Pacific Games in Papua New Guinea. The team will play a warm up game against a boys U15 team today at 2.30pm.