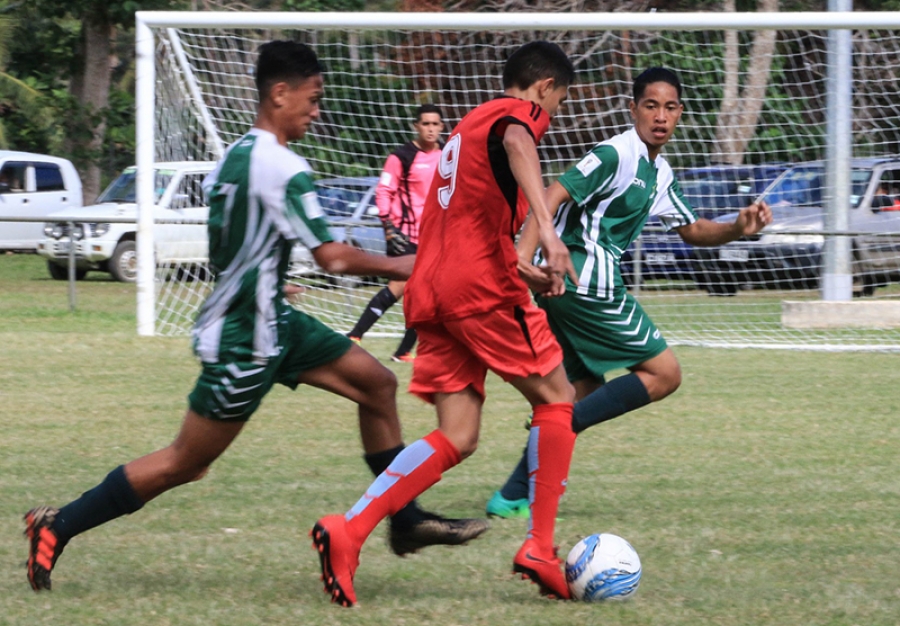 Cook Islands defends against Tonga in the OFC U16 Championship Qualifi er match on Monday. 18071729

Cook Islands are still in the hunt for a win in the OFC U16 Championship Qualifier held in Tonga.

After going down to powerhouse Samoa 0-3 in the opening clash, the national side drew level with the hosts one-all on Monday (CI time).

Tonga were keen to continue the momentum of their opening game, which saw them come back from two goals down to take a share of the points from American Samoa.

Cook Islands meanwhile were looking to put the hurt of an opening loss behind them and hopefully put some goals in the net and points on the board.

Both teams started strong, although it was the Cook Islands who forced the first save from Viliami Lui. A couple of minutes later, Siana Short was called into action when a free kick was popped into his area.

Those two early efforts and subsequent saves from either side set the tone for the remainder of the match, with the backlines of both sides proving too tough to break down despite numerous opportunities going each way.

The disappointment of having chances that went unconverted was tough for both coaches when the final whistle blew, knowing that progression was now out of their grasp.

“I’m really disappointed with the fact we had chances up there but just couldn’t put it away,” Cook Islands coach Anthony Samuela said.

“We tried to move the ball forward and attack more in this game. Counter attack and hold it at the back and push forward. We had chances, we just couldn’t finish them.”

Missed opportunities was a sentiment shared by Samuela’s counterpart Lafaele Moala, who said that was the biggest weakness for his side today.

“The finishing just wasn’t there, it was our weakness today,” he said. “We had a lot of chances but didn’t end up with the goal and so there’s room for improvement before the last game.

“We needed a win and only came out with the draw but I’m still proud of the boys. They did their best and they fought until the end.”

The OFC U16 Championship Qualifier returns for the final day of action at the Loto-Tonga Soka Centre tomorrow.

The national side will take on American Samoa in their final match.

Samoa have all but secured passage to the OFC U16 Championship in Solomon Islands after a 10-3 battering of American Samoa in the other match on Monday.