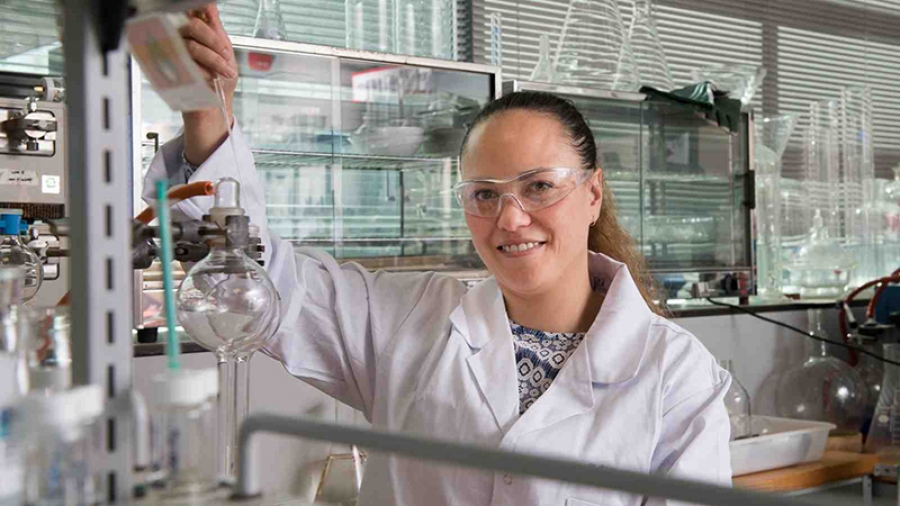 The Zonta Club of Wellington has awarded this year’s Biennial Zonta Science Award to a Pacific woman.

Dr Helen Woolner, a Cook Island Māori chemical scientist from Porirua, is the first Pacific recipient of the award which acknowledges emerging female scientists who have graduated with a PhD in the last seven years.

The Zonta Science Award comprises of a cash grant, air travel, a commemorative medal and a certificate of achievement.

Dr Woolner said she was excited about winning the Zonta award as it will enable her to travel overseas to visit the Helmholtz Centre for Ocean Research in Kiel, Germany.

“There I will collaborate with Professor Deniz Tasdemir, the head of the Marine Natural Products Research Unit,” she said.

She has been undertaking research in the Chemical Genetics laboratory at Victoria University of Wellington. Her research aims to improve our understanding of a traditional Samoan anti-inflammatory medicinal plant.

“I am investigating the plant’s potential in the treatment of human diseases such as obesity, cancer, Alzheimer’s and tuberculosis.

As Dr Woolner reflects on her journey, she said she remembered as a child watching her grandmother using plants to treat different illnesses with family members.

“I didn’t understand what my nana was doing at the time. It was not until I got to university and started taking some biology papers that I learnt about secondary metabolite.

“I was amazed with the connection I made with what my grandmother was doing and natural products.”

Dr Woolner, who is to finish her fellowship next year, was surprised to learn she was the first Pacific woman to win this award. She said there was still a low number of Pacific men and women in the field.

“Science has been in Pacific peoples’ lives for a very long time. We navigated seas using the stars, we use traditional medicines and so forth, so it would be great if we saw more of our people show interest in science nowadays as it is in us.

“Women alone are under-represented in the fields of science, technology, engineering and mathematics (STEM fields) in New Zealand and worldwide.

“Being part of the Zonta club has been rewarding for me as a Pacific woman. I hope to see more Pacific women learning about the opportunities Zonta can bring.”

Zonta Club has members who volunteer their time, talents and money to support women and girls in their communities to improve the lives of women and advocate on women's issues at all levels of society.

Convenor for the award Dr Jan Pearson said she was thrilled to learn of Dr Woolner winning the award.

“She met all the criteria we were looking for with excellence as well as having a challenging route to her achievements.

“She was highly recommended by her university colleagues and will be a wonderful role model in her community,” Dr Pearson said.

“She completed her high school studies after becoming a mother to two children in her teenage years,” he said.

During the pregnancy of her first child she enrolled at Huarahi Tamariki, the School for Teenage Parents, where she was inspired by her teachers there and realised, she wanted to pursue science as a career.

“It was difficult trying to juggle motherhood alongside study and there were many moments where I thought, maybe I can’t do this, maybe I should focus on being a mum.

“There were many times where I wanted to quit.”

Dr Woolner went and sought out advice from people in the faculty and from within my school and she said she was surprised at the amount of support I received from them.

“I thought I would be a burden to the staff with my personal struggles.

“The school were willing to accommodate, trying to work my papers around my circumstances.

“It gave me the confidence to persevere through my studies,” she said.