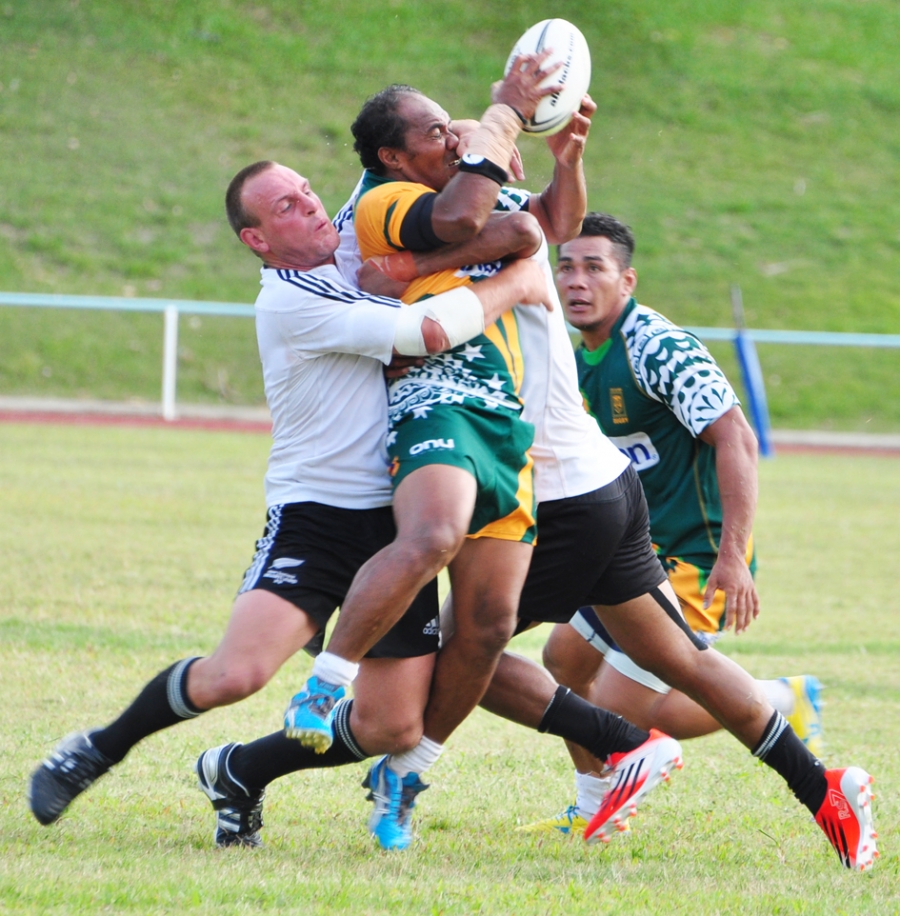 Cook Islands captain and rugby legend Vaivase Samania holds his own as two Heartland defenders take him out during the Cooks history winning match against Heartland on Friday afternoon. 14111614

Former reporter and rugby enthusiast Moana Moeka’a looks back at the build-up to the recent tour by the New Zealand Heartland XV which ended in a historic 33-20 win to the Cook Islands Resident’s side last Friday.

If you had asked me how the local boys would fare against the NZ touring side seven days out from the first game on November 11, I would have told you they were in for a hiding.

Only nine guys – two of them with injuries – turned up for training on Monday November 3up in the Happy Valley.

It was probably understandable.

Most of the players had played during the international sevens event and there were a number of wrap-ups scheduled for that Monday evening.

I had read the search article by the 1988 national coach Lester Elliot on preparing a side for two games against the NZ Divisional XV that year.

Almost all the concerns he outlined in the article were also cause for concern for me 26-years later!

Fitness levels, the set pieces, inexperience, and the discipline to commit throughout the training period, were some of the issues Elliot had to contend with at the time.

As the 2014 campaign wore on, the unavailability of some of the country’s top players was a worry as the low numbers at training made it hard to run as a team.

Four of the players who we had earmarked for the side were committed to league games which were being played on the same week as the Heartland games.

At the first squad meeting at Avatiu on September 27, as the Cook Islands Rugby Union representative I asked for commitment from those who answered the call.

For a couple of them who attended the meeting, that was the last time that we saw them. A couple more dropped out two weeks later due to work.

Ironically the Avatiu sevens team was also having its first run at the same time as the meeting. It was disappointing that only four players from the club that I am associated with, fronted throughout the Heartland campaign.

Of the four, Peter Tare and Avatiu’s player of the year Jackson Martin both suffered injuries and did not play in the Heartland games.

Nine was the average number of players who would regularly turn up to training when sessions shifted to Takuvaine on October 6.

Three of the more consistent attendees all lived in Titikaveka, while another would bring his toddler and pre-schooler to every run.

Only on two occasions in the first four weeks did we have sufficient players to run as a team but we still didn’t have enough numbers in the backline and lacked a genuine first five-eighth.

Twice training was called off after only a handful of players turned up.

The veteran Vase Samania was brought in to help Walter Tangata Snr with the team.

We did put some pressure on him to play and direct proceedings from the pivot position however he was not really committed three weeks out from the game.

This led to the CIRU requesting the services of 19-year-old Tiano Arona – the son of ‘Pops’ Apii who had played for Arorangi during the 1980s – who was a halfback/five-eighth playing in Northland, New Zealand.

It was also arranged for Aitutaki sevens representative Mano Tekopua to fly in for the games – his colleague and national sevens player Teu Paerau making himself unavailable.

On Monday November 10– one day before the first game – there was a glimmer of hope with nearly 30 players turning up.

However it was a bit too late to put combinations together.

And it showed during the first game, with the local side being thumped by a rampant Kiwi side which dished out a lesson in the art of rugby.

The visitors scored nine tries to Arona’s two penalties in the 64-6 demolition.

It bucketed down before the game and showered throughout which probably helped the NZ side’s cause.

On the Wednesday it was a huge surprise to see all the players at training -- less three of the Samoans – Meki Magele, James Tofilau and Logan Perenise, who were nursing injuries. Takuvaine number eight Travel Tou Jnr also joined the group.

The session was basically taken up by defensive drills and I sensed some urgency in the players as they took turns to hoe into each other.

On Thursday it was a lighter and shorter session with the first fifteen running through its moves against the rest.

Arona kicked a penalty to put the Residents in front 3-0 four minutes into the second game. However the Heartland team put on two tries in quick succession – the second to first five-eighth and kicker James Lash (14-3).

Centre Magele scored a brilliant try in the left hand corner on the end of a sweeping movement in the 16th minute following good work by the forwards.

Tou then went over a couple of minutes later after sustained pressure on the Heartland line. Arona landed both conversions (17-14) and then kicked three further penalties – the last on the stroke of halftime – to have the Residents lead 26-20 at the break.

Winger Totoa Auvaa scored to the right of the posts in the 50th minute and Arona was to kick the conversion for the final points in the match. It was a game of attrition from that time on with the visitors turning down the opportunity to kick for goal and going for five-pointers.

Magele was sent off for a high tackle three minutes from time but the damage had already been done despite the Residents encountering problems in the scrums and lineout throughout the 80 minutes.

The Cooks scored a historic victory (33-20) – the first in six matches against Divisional sides since 1988. More importantly the team had won the match after being thrashed by 58 points in the first game three days earlier.