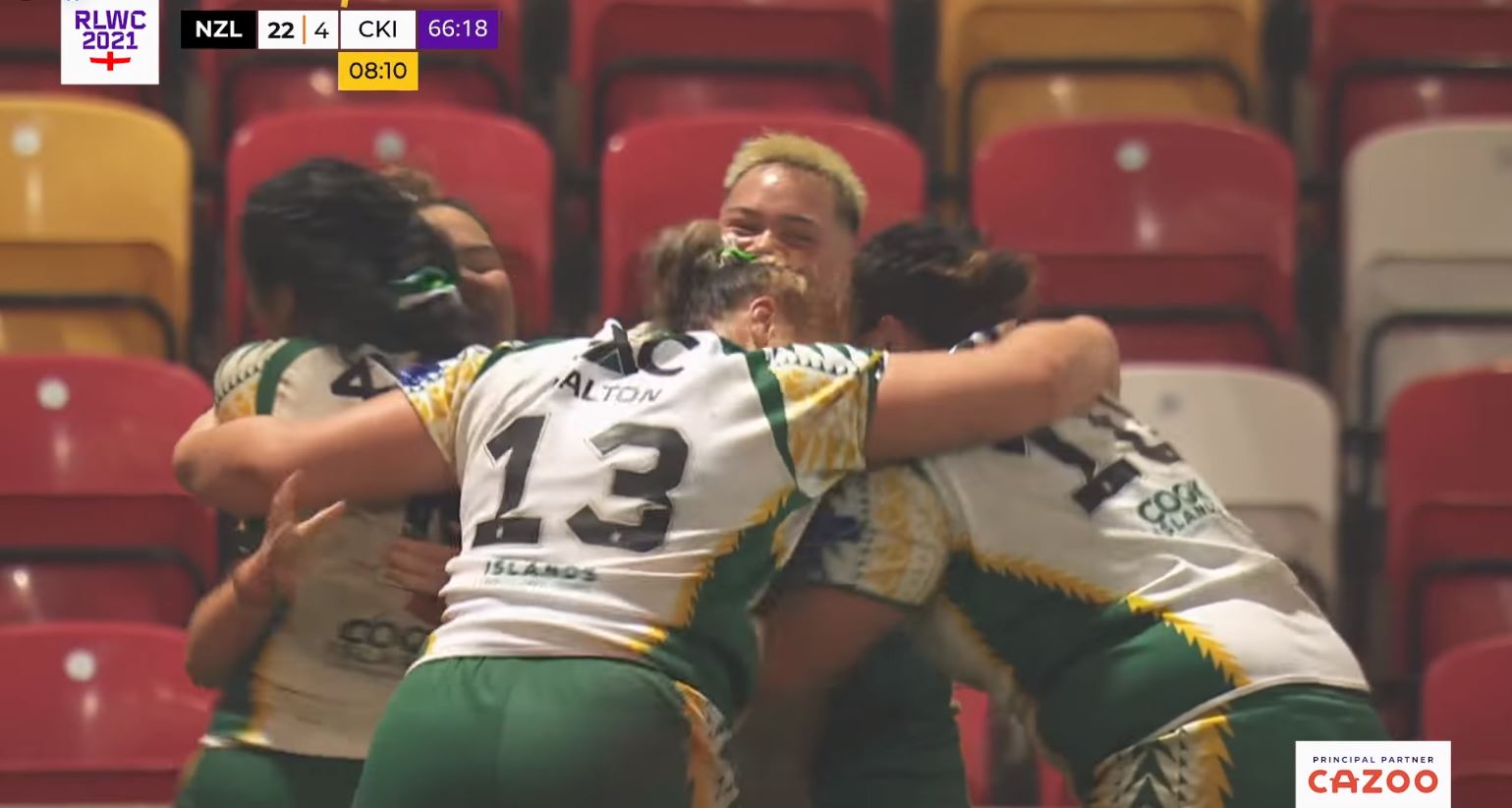 New Zealand have confirmed their spot in the semi-finals of the women’s World Cup following a 34-4 victory over the Cook Islands yesterday.

The Kiwi Ferns were far from their best and never left second gear, though they still possessed enough quality to pick up their second win of the tournament.

Despite the result, the Cook Islands certainly made their nation proud. Mackenzie Wiki stamped her name into the record books with a second half try.

If facing the three-time world champions wasn’t daunting enough, the Cook Islands were forced to do so without their captain.

Kimiora Breayley-Nati was taken off in the first minute of the match after receiving a nasty blow to the head in her attempt to bring down Amber Hall.

Despite the massive setback, the Cook Islands battled on and even went on the offensive. A strong attacking set in the third minute culminated with a dangerous grubber kick from Kere Mutua – one which was ultimately dealt with by New Zealand.

In their opening match of the tournament, the Kiwi Ferns made a notable slow start against France and a similar scenario was developing against their Pacific rivals.

However, while the Cook Islands matched their opponents with heart, they were inevitably unravelled by quality.

The opening try certainly epitomised that as Raecene McGregor picked up the ball 25 metres out and produced two outstanding dummies before crashing over.

Five minutes later, it was individual quality from Krystal Rota which forced the breakthrough. The Kiwi Ferns captain picked up the ball from dummy half and powered her way over to make it 8-0.

The Cook Islands stopped the rot. For the next 15 minutes, they did a good job of keeping New Zealand at bay.

However, the 2017 runners-up were able to find another try before the break, with McGregor displaying her speed and strength after forcing her way through two Cook Island players.

New Zealand’s slow start to the first half was replicated after the restart as their opponents desperately searched for their first try of the tournament.

However, despite being parked on the Kiwi Ferns 10 metre line for a solid eight minutes, the breakthrough never came for the Pacific outfit.

Instead, it was once again the quality of New Zealand which saw them bag their fourth effort of the match. McGregor was the try scorer after dummying her way over from close range.

The Kiwi Ferns then improved their lead to 22-0 as Ricky Henry’s side turned up the heat. New Zealand shifted the ball out wide with Shanice Parker finding eventual scorer Mele Hufanga.

While the Cook Islands were never going to mount a comeback, they were still desperate to make history. To the delight of the crowd, that’s exactly what they did.

A thunderous break from Anneka Stephens saw her make 30 metres from the halfway line. Cook Islands continued to press; and they were soon in rugby league heaven as Matua’s grubber kick into the corner was finished off by Mackenzie Wiki – the first try scorer for the Cook Islands at the tournament.

New Zealand enjoyed a strong finish to the match with Mele Hufanga going over for her second and Annetta Nu’uausala chipping in on the 80th minute mark.

The Kiwi Ferns may be through to the semi-finals, though it’s the Cook Islands who will remember this match for a long time to come.