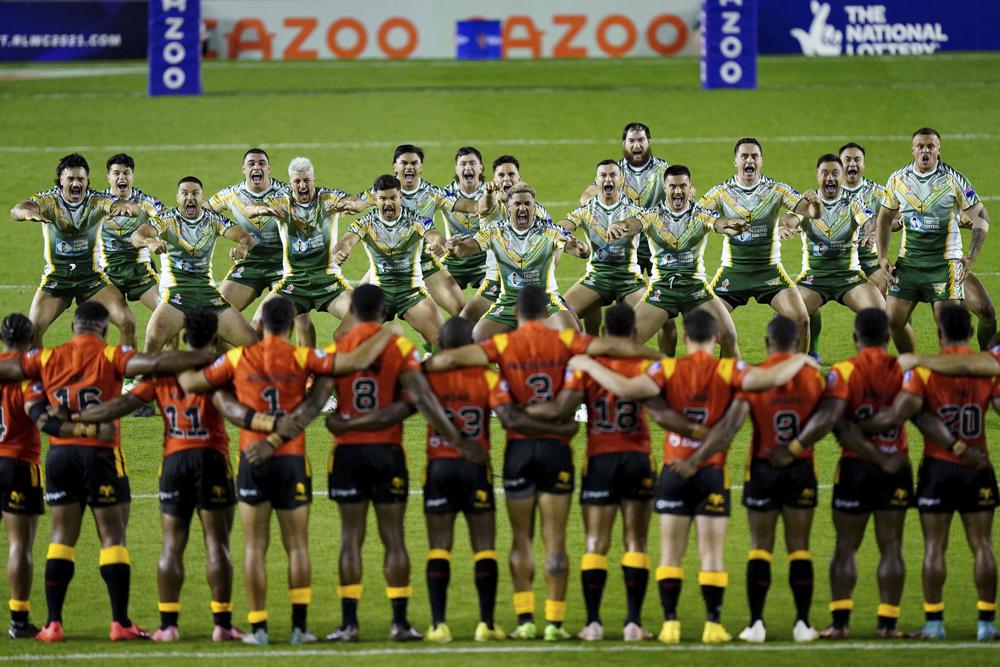 Papua New Guinea came away with a 32-16 win against the Cook Islands in a league game that included a pair of sin bins and a controversial try.

In the 60th minute as the score sat 26-8 to the Kumuls, Cook Islands centre Anthony Gelling attempted to turn out of a tackle, reaching his arm out to ground the ball at the Halliwell Jones Stadium un Warrington, England,

The on-field referee blew his whistle for a try, but Fox League’s Andrew Voss was certain he was attempting to “sell” the four-pointer.

“He has bounced the ball, Gelling is claiming a try, but I don’t think so, I reckon he bounced it for sure,” Fox League’s Andrew Voss said.

“He is going to try and sell it, referee for the moment is locking it in as a try.”

After reviewing the footage multiple times, Bunker referee Liam Moore also awarded the try as the ball bobbled out of Gelling’s hands.

“The Kumuls are really not happy with that, for me he didn’t seem to have control of it when he grounded it,” Fox League’s James Graham said.

“Another controversial decision that goes against the Kumuls.”

“They are shaking their heads saying when are the rugby league gods going to shine a light on us, I can’t give that a try,” Voss said.

“It is going towards the dead ball line, the way he is pushing the ball.”

Earlier, PNG flyer Rodrick Tai scored a stunning four-pointer to open the scoring, slicing through the line off a 20-metre restart.

Halfback Kyle Laybutt added to the scoring eight minutes later with a darting run before the Kumuls prop Mackenzie Yei was sent to the bin.

Yei’s ugly tackle made direct contact with Rua Ngatikaura’s head, and the referee raised 10 fingers to give him his marching orders.

The Cook Islands used their extra man to find winger Paul Ulberg in the corner to open the account.

Only one minute after returning from halftime, Rhyse Martin charged through the defence from a Laybutt short ball.

Rodrick Tai later scored again off the back off a scrappy kick, with Alex Johnston injecting himself into the game, before a Justin Olam break sparked Lachlan Lam’s first of the night.

Gelling scored the controversial four-pointer for the Cook Islands before Reubenn Rennie was sent to the bin for an ugly lifting tackle.

“It makes no sense at all to produce that, this is high drama in Warrington, the tackle was finished, but just not called for,” Voss said.

“You cannot do that, and it looks like Wellington is okay but you can’t do that,” Graham said.

Justin Olam scored a four-pointer of his own to put the game to bed, Johnston again stepping past defenders to find the Storm flyer.

Cook Islands fullback Kayal Iro scored a consolation try with three minutes remaining in the contest, but Papua New Guinea had already skipped them in the Group D leaderboard to sit second.