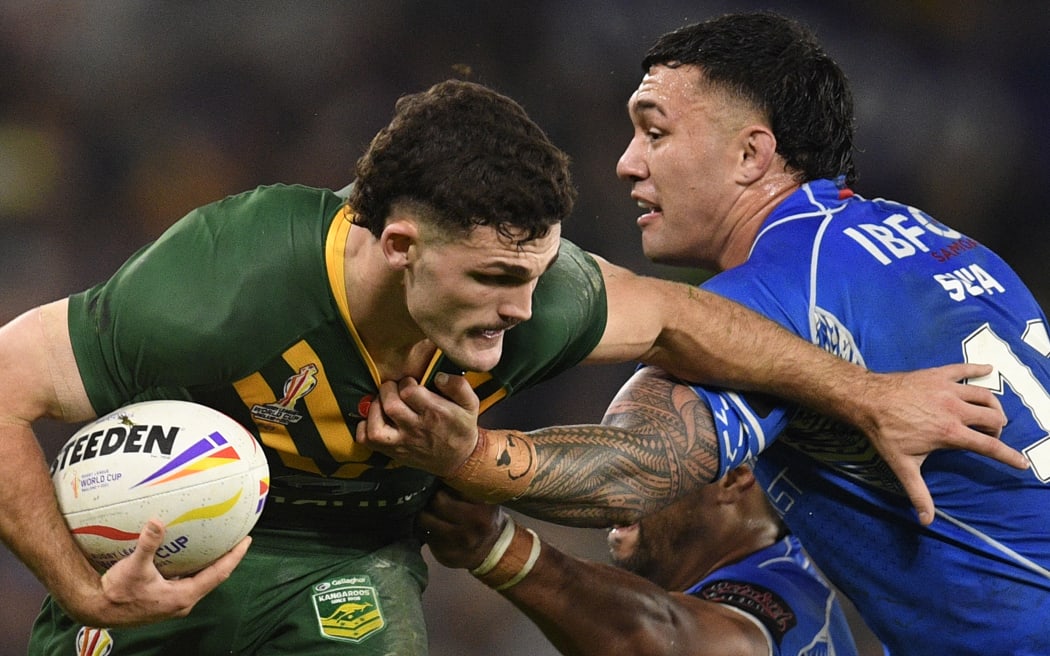 Samoa’s hearts were broken in the World Cup final with Australia running riot in a 30-10 win at Old Trafford.

Forwards Junior Paulo and Josh Papalii rolled up their sleeves to get through a mountain of work but their efforts couldn’t inspire the same performance we saw a week ago in the semi-final.

Star five-eighth found himself under a heap of pressure after an injury forced Anthony Milford to move to hooker and although Luai was kept relatively contained, you couldn’t fault his effort.

Regardless of the result, Fox League’s Corey Parker thought it was a “brave performance” from Samoa and the team “can hold their heads high.”

Former English international James Graham, agreed adding: “You’ve got to give credit to this Samoa team.”

Made some big tackles early in the game, but was put under pressure by some poor defensive reads by his teammates and was left to unsuccessfully stop a barnstorming Latrell Mitchell in Australia’s first try. He did however, stop Mitchell from scoring a second try later in the second half. Was contained by the Kangaroos and unable to have much of an impact on the game.

Genuinely looked dangerous when he touched the ball and got a couple of exciting breaks down the sideline but couldn’t turn either into points. Still finished with an impressive 118 running metres, four tackle busts, two linebreaks and two offloads.

Usually defensively strong, the veteran centre couldn’t stop Liam Martin close to the line. Had a hand in Samoa’s first try, but was quiet compared to previous games during this tournament.

Caught out of position in two of Australia’s tries and knocked on in the first set of the second half. But the master of the intercept struck again, snatching a Ben Hunt pass to run 30 metres and score.

Had an error-riddled start to the game, missed a tackle on Latrell Mitchell, dropping a high ball and then losing the ball in a tackle a few minutes out from half time. But he crossed in the corner to get Samoa on the board — and keep their hopes alive.

Couldn’t fault his efforts given a lot of responsibility fell on the star five-eighth after Anthony Milford had to move to hooker. He was rewarded with a try assist when he threw a floating pass in the lead-up to Samoa’s first four-pointer. Had some other nice touches too, including a cutout pass to send May into some space down the sideline.

Had a defensive shocker, making 11 tackles and missing five — a few of them leading to tries too. He also knocked on 10 metres out from the Kangaroos’ line straight into the Kangaroos’ hands. Had very little impact on the game and was forced to move to hooker early in the second half after Chanel Harris-Tavita copped a head knock.

Didn’t spend much time on the field, but made an important tackle on Valentine Holmes early on. Finished with 35 running metres, a tackle bust, an offload and 18 tackles with one miss.

Showed his halves experience in the match, kicking what should have been a 40/20 out of dummy half had James Tedesco been ruled out when tapping the ball back in. Struggled a little defensively given he was playing out of position though and his night unfortunately came to a premature end after copping an elbow from Angus Crichton.

The skipper has been massive for Samoa throughout the World Cup but no matter how hard he tried, couldn’t inspire a win when it mattered most. Made a try-saving tackle on Jack Wighton early in the game, but his tired legs couldn’t stop James Tedesco late in the piece. Finished with an admirable 105 running metres, a tackle bust, four offloads and 27 tackles with four issues.

Made 27 tackles but also made a game-high of six, including an important one on Josh Addo-Carr through in lead-up to Australia’s second try. Finished with 34 running metres, two tackle busts and two offloads.

Did his job, notching up 92 running metres and making 24 tackles with just one miss. Also had some nice touches, but Samoa just couldn’t get it to stick together.

Didn’t spend a great deal of time on the field, only took two runs and missed crucial tackle on Josh Addo-Carr in Australia’s first try.

A barnstorming performance from the powerful prop, who went oh so close to scoring in the second half. Got through a mountain of work for his side, running for 152 metres — the most of any forward on the field — while also getting three tackle busts and making a team-high of 33 tackles with just one miss.

Deserves praise for playing with a bung shoulder and tried to get involved but didn’t have much impact. Was also a victim of Cameron Munster’s signature one-on-one steal.

Got through a fair bit of work, making 27 tackles with two misses but with 62 running metres Samoa probably needed a little bit more punch from the veteran forward.

Missed a couple of crucial tackles, but also didn’t get a lot of opportunities with ball in hand and wasn’t on the field for long.