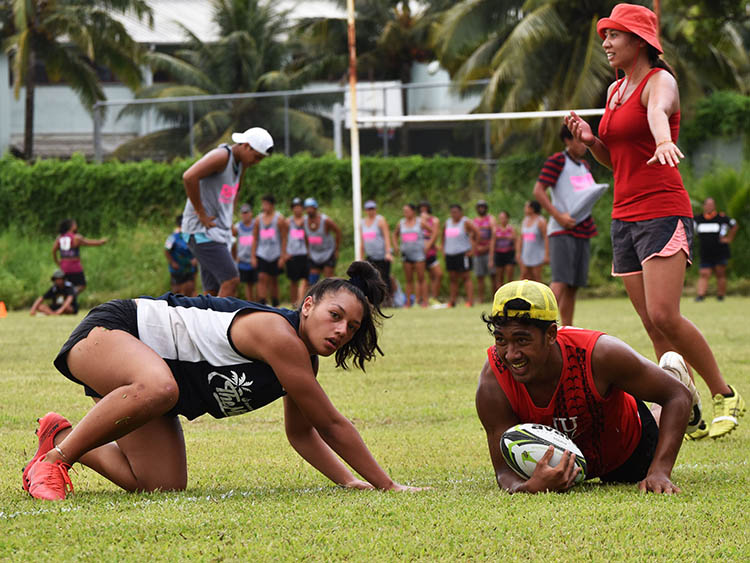 RBDC and The Milky Way were crowned the champions at the Vodafone “Back to local Roots” Boxing Day Touch Competition on Saturday at The Swamp in Avatiu.

The Milky Way claimed the social division after overcoming Remix in a tough final.

Team Remix coached by local legend Billy ‘Bush’ Tuaivi made it into the final beating newbies Called 2-1 in the semi-final.

The other social grade semis saw The Milky Way and Bandits go to a drop off to determine the winner.

Both teams scored a try each in their opportunities of six touches so it was down to the next team to score and claim the win. A poor pass from the Bandits resulted in a hand over to The Milky Way who managed to speed around the Bandits defence to score and secure their place in the final.

In the final, The Milky Way continued its winning streak to beat Remix by 3 touch downs to 2, taking home the social grade title. In the open grade, eventual winner RBDC defeated Taokotaianga comfortably by 4-0 in the semi-final. The other semis saw Untouchables battling hard against Peter Marsters-led NMT Sea Eagles. The Untouchables eventually ran out victors 2-0.

In the final, dark horse Untouchables came out firing and 10 minutes into the game, the side led 4-2. The Untouchables dominated both on attack and defence with brothers Steven and Cajun Willis controlling play. A stray pass from RBDC saw Daimzel Rongokea sprint the length of the field to score, taking the Untouchables further into the lead.

Not panicking, RBDC fought back and an intercept from Mafu got the team back on track, giving the experienced Conrad Piri and Geoff Halston combining with youngster Genesis Piri and Jeremy Campbell an opportunity to bounce back. They worked superbly on the five metres providing the comeback by scoring three quick touchdowns in a row to take them ahead of the Untouchables and win the tournament by 5-4.

Cook Islands Touch president Daphne Brown said: “It was an excellent hot day of Touch with the full 16 teams turning out fully kitted in their team uniform colours to take on the 2020 Vodafone Boxing Day Touch tournament.”

“Some teams headed to the Avatiu Field early to put up their team marquees to claim their team camp around the field. All teams played four games and others went on to play five and six games. It was good to see a great mix of players participating in the competition and an increased number of youth players.”

The introduction of the social grade provided an opportunity to teams wanting to learn the game, play for fun and be with their friends and family, said Brown.

“It proved to be an excellent category. It was a good fit for the teams in the grade and they thoroughly enjoyed themselves. The eight teams in this grade all played three round games and then headed into the business end of the quarter finals.”

The open competitive grade saw a good number of regular and national Touch players “spread themselves out amongst the teams in the grade to provide an even level competitive playing field providing the crowd with skills, speed and sheer brilliance”.

“Cook Islands Touch would like to thank its major sponsor Vodafone Cook Islands and supporting sponsors Te Aponga Uira and Palace Takeaways for their tremendous support and making it a special day for everyone. Congratulations and meitaki maata to all the teams and volunteer referees that took part in the 2020 Boxing Day Tournament.”