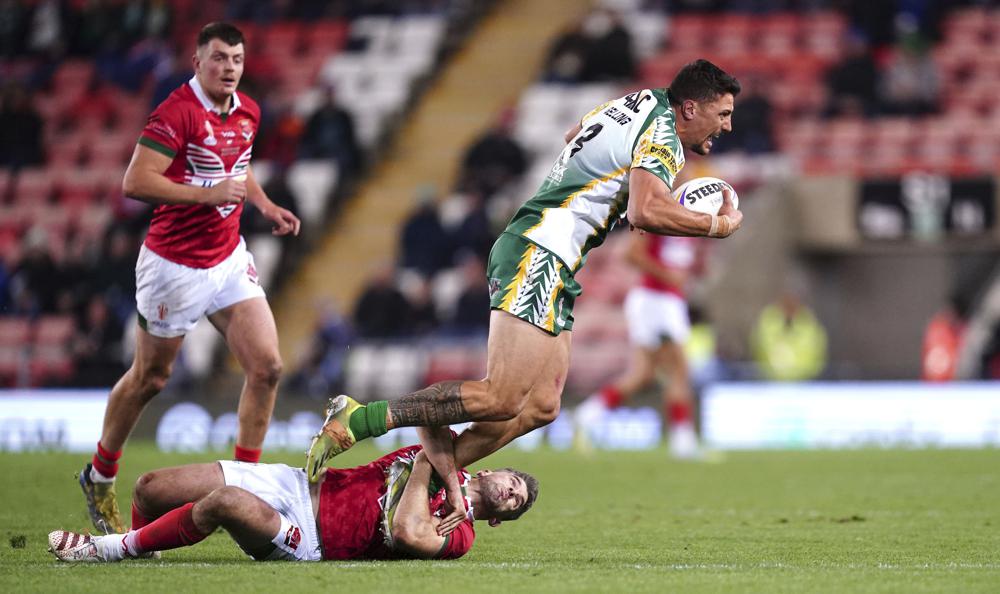 Cook Islands had to come from behind twice to beat Wales 18-12 in their opening Rugby League World Cup match at Leigh Sports Village Stadium in Manchester on Wednesday morning.

National coach Tony Iro said the Kukis allowed Wales to dominate the ruck and play the ball speed in the first half.

Cook Islands were down 8-12 at the break following a “rusty” first half.

Iro told Cook Islands News: “Although we created opportunities and had two tries disallowed, we let them get out of their own half far too easy.”

He said the message at halftime was to win the tackle area and be more aggressive with the line speed.

“I thought we dominated for most of the second half but we just couldn’t turn that dominance in to points. To their credit our boys were patient and managed to eke out a victory.”

“Obviously we will need to be a lot better next week but I think we have a lot of improvement left in us. With no warm up game before this match we were probably always going to be a little rusty so this hit out will help in our preparation for PNG.”

The Cooks started as pre-match favourites but conceded first when Rhodri Lloyd scooped up a well-weighted kick from Josh Ralph to touch down in the 13th minute.

Kayal Iro, Zane Tetevano and Steve Marsters threatened for the Cooks before Tepai Moeroa barged over only to lose possession. They levelled at 6-6 when Huddersfield-bound Esan Marsters burst through to send centre Anthony Gelling racing clear to the posts.

Wales reclaimed the lead with a fine individual try from halfback Ollie Olds, who created space with a dummy and powered to the line. Matty Fozard landed his second conversion but a penalty from Steve Marsters, adding to an earlier goal, cut the Kukis’ deficit to 12-8 at the break.

They upped the tempo in the second half, and had a try disallowed for a knock-on. The game turned with two quickfire tries. Davvy Moale grabbed one from a Jon Ford pass, and Steve Marsters rose in the corner to claim a high kick and score.

Wales, without a World Cup win since 2000, almost produced a last-minute draw after Lloyd charged down a kick but Caleb Aekins opted not to pass with a try for the taking out wide and the chance was lost.

The Kukis came from behind twice to beat Wales 18-12. Cook Islands will take on Papua New Guinea on October 25 before playing Tonga on October 30.

Play of the game

With his side trailing 12-8 with 22 minutes to play, 19-year-old Davvy Moale ignited the Kukis late comeback. It was all muscle from the Rabbitohs young gun, who barged through from close range before carrying several defenders over the line to score. Moale now has two tries in two Tests for Cook Islands having bagged a four-pointer in the mid-season international against Samoa at Campbelltown Stadium.

“I’m a bit lost for words. We weren’t good enough but we got the win so we’re happy with that. Obviously, I played over here for a bit of time and I know a few of the Wales boys and we did a bit of homework on them. We knew they were good and they’d come out hard. They’ve got strong backs who carry strong, so credit to them they got through us and it took us a bit of time to combat them. I think we just showed a bit of grit there in the end.” – Cook Islands halfback Johnathon Ford.

“There’s a lot of emotion involved. We were in there right at the end. We probably had half a chance at the very end but we just didn’t manage to take it. We didn’t control our offloads well enough in the second half and ultimately that’s what hurt us. But I’m immensely proud of them and I thought the effort was absolutely superb.” - Wales coach John Kear.