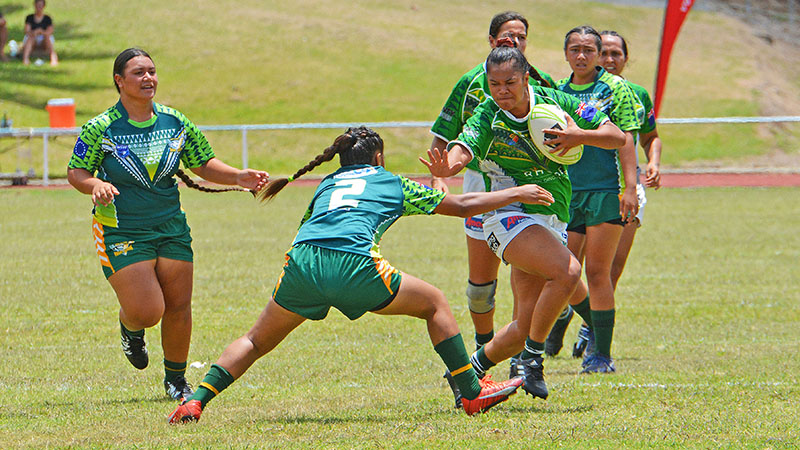 Patricia Taea (with the ball) has been elected the development coordinator for women’s league in the Cook Islands. 21010825

The 2021 Cook Islands domestic rugby league season will start on Friday next week.

At the association’s annual general meeting last week, Robert Graham was elected the vice president, Francis Toa as the new secretary and Rae Tupa in the finance role.

Former national sprinter Patricia Taea was elected as the development coordinator (new role) for women’s league in the Cook Islands.

Carlson said they have also created other new executive roles in the organisation to help in growing the game.

The roles include events coordinator, marketing and sponsorship, media and public relations and policy and procedures (legal).

“The organisation have grown to a stage where we need help to manage the organisation and its event as we are all volunteers in this role,” said Carlson.

“We have created these roles to assist us and hopefully some people out there with the right skills and passionate about the game can be part of our team.”

Carlson acknowledged outgoing vice president Geoff Tama for his support to the organisation at the AGM.

He also thanked Cook Islands Rugby League patron and former Prime Minister Henry Puna as well as new PM Mark Brown for their support “especially during those critical times of trying to qualify for the World Cup 2021”.

“I am very pleased to say that we have produced the results to qualify both our men and women to the Rugby League World Cup 2021 in England,” said Carlson.

“The goal now is to prepare well and rock the world of rugby league.”

Cook Islands Rugby League’s domestic season kicks off on Friday next week between the Aitutaki Sharks and the Avatiu Eels.

“This is set to be a good opening battle between these two teams. Very pleased to see the Sharks in competition and after a top performance at the Raro Cars League Nines in Paradise last month, we are expecting great things from them this season,” Carlson said.

Cook Islands Rugby League is also please to include women into the competition and aiming to launch four teams into the national competition.

“Several clubs are doing their final mustering (today) from juniors to the premier grades including the women. CIRL would like to encourage all the villages to get out there and support your club. Play League or What.”