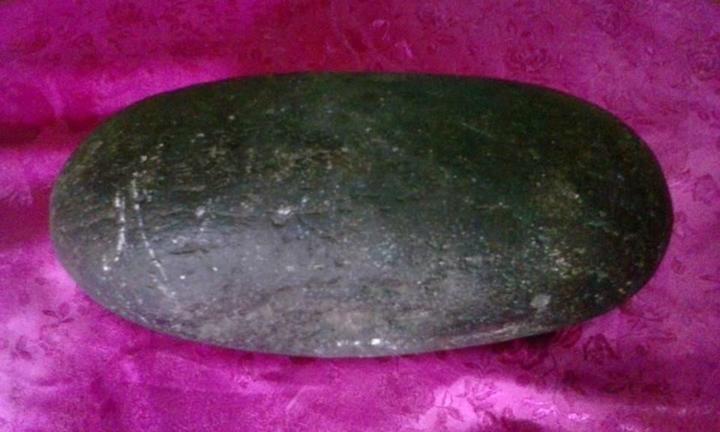 The “ball” used in the game of Kasivaki was a large, heavy stone, weighing around 35kgs. Photo: Supplied

Rugby is described as one of the toughest sports on the field, but it's nothing compared to how they used to play it back in Tonga.

Kasivaki is an ancient Tongan sport very similar to rugby, but it was played in the ocean, under the water and with a rock.

Tongan artist and practitioner, Milika Pusiaki, said it was a sport used to entertain the king and chiefs of the villages.

"It's really an ancient Tongan sport that was purely used for entertainment, just to show off their skills and strengths and fighting stamina in the water," she said.

"They would go down into the seabed and stand between two soft coral rocks with one team on the east and the other on the west... it's like playing rugby under the water with a rock."

Two teams of seven men were selected to face-off in the underwater game with no reserves.

The aim was to score a 'try' at the opposite end of the bay, while keeping hold of a 35kg rock and fending off the opposing teams players.

It would often see men drown, leaving only the strongest and most skilled men to play another round.

Pusiaki, a former tour guide for the Tongan National Cultural Centre said the most skilled warriors were gifted land or anointed special titles.

"There was a chief by the name of Tokemoana, and he was known as the most skilled warrior of the sport, and he would sit on his thrown named Maka Ko Laupua, and he would watch the other Tongans compete against each other," she explained.

"He would be anointed with a special title and was sometimes given a piece of land as a prize, but he was definitely elevated in terms of the title and the hierarchy of Tongan society."

It was an honor for men to play for the king, she added.

"They wouldn't do it for their own gain, they would be delighted to see the chief or the king himself, that he's enjoying what they are doing and that's all that mattered to them."

"At the end of the day they feel content knowing that their superior, the king, his majesty or even the noble is happy in watching the game."

It is understood that his late Majesty King Taufa'ahau Tupou I prohibited Kasivaki as it caused the deaths of his subjects for the entertainment of chiefs.

There have however been more-modern attempts to revive the game, with the Japanese adopting the under water sport as "water rock rugby".

"That's exactly the version of Kasivaki that I heard from the elders, it's exactly like that... it's like seeing what the ancestors did in the past," she said.

Pusiaki said she'd like to see a more modern version revived in Tonga, to keep the history of the sport alive.

"It's similar to Tau'olunga, the Tongan dance you know, non-Tongans who are keen to learn more about another culture by taking part in our dances, why not our sports."

"I think with the 35kg rock there would be trouble [to revive], that's why they sink because it was too heavy.. but I think if it is to be revived, we should make something light and just do it above water."

"Let's do this as a Tonga original game but get our palagi brothers to try it for once, we always do it the western way, but we have our own traditional games that could be revived and elevated into a more professional style."