NZ’s Fijian-Indians want to be recognised as Pasifika, not Asians 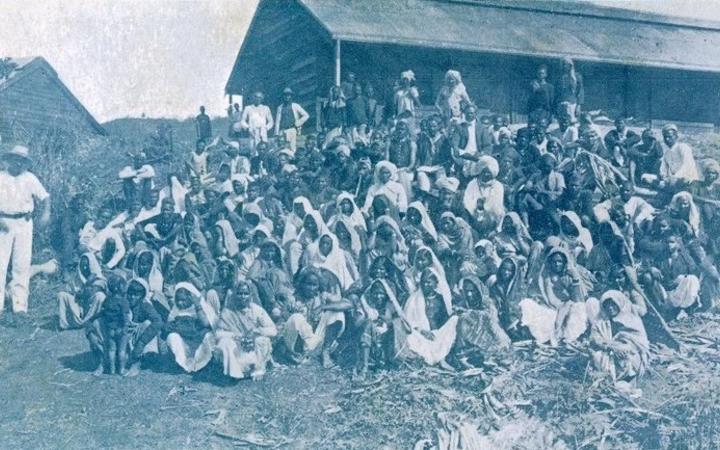 Fijian-Indians in New Zealand are descendants of indentured labourers brought to Fiji by the British over 140 years ago to work on the sugar-cane plantations. Photo: RNZ/Supplied

Fijian-Indians living in New Zealand are opposing moves by the government to classify them as Asians and not Pacific Islanders.

Now they are saying the government's classification of them as Asians and not Pasifika is "wrong and must be corrected".

More than 140 years ago, the Leonidas - a ship carrying indentured labourers from India - arrived in Fiji.

Between 1879 and 1916, more than 60,000 Indians were brought by the British to work on sugar-cane plantations in Fiji, lured by the promise of a better life.

The Indian workers, under contract, came to be known as Girmitiyas - a Hindi take on the English word 'agreement'.

Today 15,000 of their descendants live across New Zealand and for the past two years, they say they have been urging the government to recognise them as Pacific islanders and not Asians.

The Fiji Girmit Foundation of New Zealand said many of its members had never been to India nor had any links or connection with the motherland.

The foundation's chair, Krish Naidu, said young Fijian-Indians had strong roots to Fiji and they wanted to continue to proudly identify that link.

Naidu also said they were missing out on key support and opportunities in areas like education and health because they were classified as Asians and not Pacific Islanders in New Zealand,

He said by not recognising Fijian-Indians as a Pacific community, the government was preventing them from sharing in any of the resources and support allocated to these communities. Naidu said discussions had been held with StatsNZ.

But StatsNZ have said that a review of classification could not happen until the 2023 Census, he said.

"So, we will still be classified as Asians if we choose to identify ourselves as Fijian-Indians.

"It's quite disappointing, and it's wrong and must be corrected.

"We respect and acknowledge the process, but we don't want to have to wait until the 2028 Census for that to happen."

The Minister for Pacific Peoples, Aupito William Sio, said while he understood the group's concerns, he added the classification for Fijian-Indians was in line with an ethnographic profile which included people with a common language, customs and traditions.

Aupito said that profile was different from indigenous Pacific peoples.

In a letter to the foundation, the minister said StatsNZ's ethnicity definition was used to compile the data available to understand the peoples of New Zealand.

"StatsNZ recognises ethnicity as the ethnic group or groups a person self-identifies with or has a sense of belonging to," Aupito said.

It is not the same as race, ancestry, nationality, citizenship or even place of birth, he said.

"They've identified themselves now that the system of government has not acknowledged them.

"Those conversations have to be ongoing to figure out how do we capture the data of who they are as Fijian-Indians or to develop policies around that to support their aspirations."

The 2018 Census also showed that about 21,000 Fijians live in New Zealand. These included the indigenous Fijians, the iTaukei, and Fijian-Rotumans - both groups were recognised as Pasifika.

Rotumans have been in New Zealand for as long as their Indian counterparts.

The chair of the Auckland Rotuman Fellowship group, Rachael Mario, said she saw no issue in Fijian-Indians being classified as Pacific.

She said Fijian-Indians should be recognised as Pasifika along with the iTaukei and Rotumans.

Mario said she was not happy with the way the ministry had handled the matter.

She said this was a 'systemic, long-standing discrimination and racism' against the community in New Zealand.

"We have to do what's right," she said. "Fijian-Indians are from the Pacific. They are born in Fiji and they are Fijians. They should be treated as Pacific people.

"We live in NZ and the law states that Fijian-Indians are Pasifika, I don't see why it would be otherwise."

Malcolm Andrews is a Fijian of Solomon Islands' heritage and he is the founder of ConchShell - a project that focuses on 'knowledge transmission and revitalisation of indigenous processes and protocols specifically for young Pacific people' in New Zealand.

He said the term 'Pasifika' was given to Pacific people by their colonisers.

Andrews said this brand came with a lifestyle including the values, principles, belief systems and landmarks which he added had connected Pacific people via migration.

He claimed, unfortunately Fijian-Indians did not fall into this category.

"For example, the tattooing in Samoa: the tatau and pe'a have strong connections to the veiqia in Fiji. The canoes that Polynesians use also have strong links to the plants that grow in Fiji. The language that we speak, and even our values are quite unique because they are woven through the totemic relationships that Pacific people have.

"Our values are grounded with the relationship we have with the land, the oceans and the heavens: we have the plants, animals to signify this relationship that enables us to maintain harmony and balance. Indian-Fijians have no connection to these things that mean a lot to us as Pacific people. They argue that they have been in Fiji for 140 years, but there is no study to signify the specifics around lifestyle: the way we look and the way we do things."

Andrews was also the Health and Education Manager at the Pasifika Medical Association and suggested Fijian-Indians hold a talanoa session with other Pacific communities such as Samoans, Tongans and Solomons to discuss how best to address their concerns.

He said it was time to "make a stand" - and believed that Pacific people had been silenced enough to be categorised and not defined by themselves but by their colonisers.

Andrews also co-produced the Fijian language programme at the Pacific Media Network and said the word "Pasifika comes with thousands of years of migration and evolution. It should not be compared to just 140 years of existence in one place".

"There is also a major identity crisis within the Pacific community. As for my Fijian-Indian brothers and sisters, it's not that I don't want them to be a part of the Pacific family, but it's about identity and knowing where you come from, your origins." Dr Primla Khar is President of one of the largest Indian groups in New Zealand - the Indian Association Manukau in South Auckland.

She said if Fijian-Indians wanted to qualify themselves as from the Pacific Island, she did not think there was a problem with that.

"The intent by a group of people seeking recognition in a particular manner could be influenced by the provisions and the policies that the government rules out," she said.

"I am from the healthcare profession, and I do understand some ethnic groups including the Māori and Pacific islanders - when we talk about equity and inequity - the government is trying very hard to work on those factors."

"If people who have been in Fiji for whatever number of years want to qualify themselves as Fijian-Indians from the Pacific Islands, I don't think there's a problem in that. Fijian-Indians are Indians living in New Zealand. I have come to NZ from India. NZ is my new home but my motherland still remains India.

"So Fijian-Indians should be qualified as Indians. But if there is a subset where they want to qualify as Fijian-Indians from Pacific islands, I think there's no problem in that. It's almost like a subset."

But Krish Naidu and the Fiji Girmit Foundation maintained that Fijian-Indians had a culture, language, customs and traditions that were distinctively different to other Indians.

"Just because we eat roti and curry, watch Bollywood movies and celebrate Diwali doesn't mean all Indians are the same," he said.

"This issue of a failure to recognise us as a Pacific people is deeply distressing, and so far our efforts to get that corrected have largely been ignored."

The move by the Fijian-Indian community in Aotearoa generated a lot of debate across the region.

Academics, historians and other professionals have all joined in the discussion with different views.

Naidu said he hoped good sense would prevail and he was optimistic there would be change.