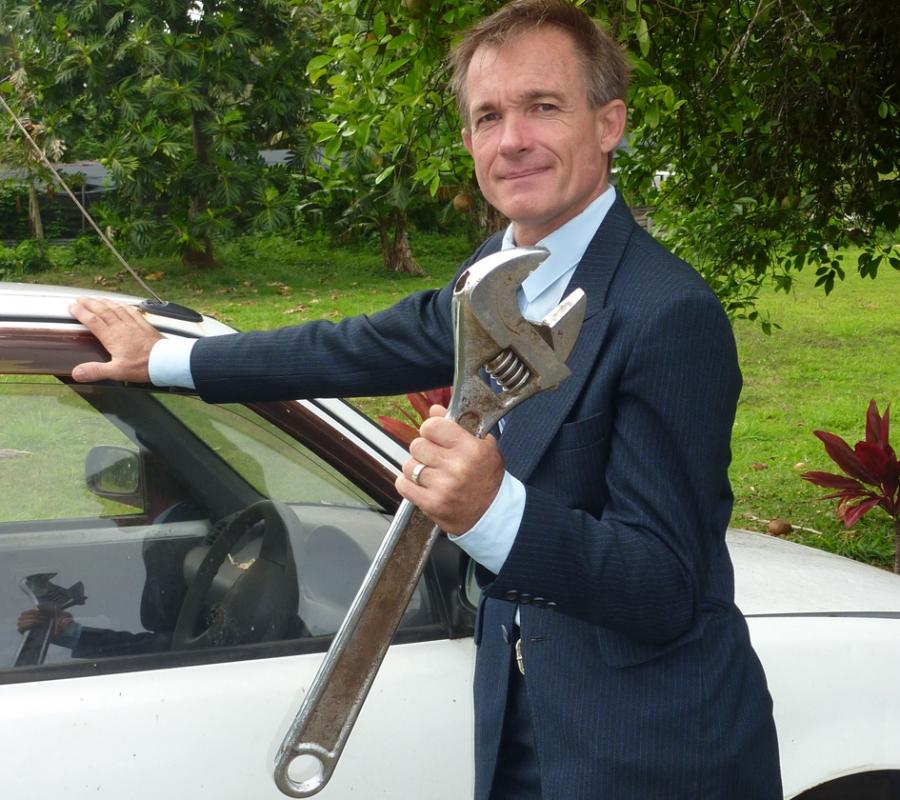 Lawyer Tim Arnold has labelled reports of substandard work as deeply troubling and unacceptable on a number of levels.

A local lawyer has lodged an official complaint with the government over its handling of the $23 million ring mains replacement currently underway in Rarotonga.

In response to this week’s article in CINews (October 29) - regarding allegations of substandard construction quality on the project by a former Te Mato Vai engineer - prominent local lawyer Tim Arnold has lodged a formal complaint with the Public Expenditure Review Committee (PERC).
In a four-page letter addressed to the Committee, Arnold took issue with a number of features of the Government’s contract with the China Civil Engineering Construction Corporation (CCECC) – the lead contractor in the on-going replacement of Rarotonga’s ring mains.
“There are a number of troubling aspects to this contract which suggest Government is allowing political and cultural considerations to take precedence over engineering best practice,” writes Arnold.
Claiming to have experience in large construction contracts and working knowledge of hydraulic pressure testing and its quality assurance role in pipeline projects, Arnold said he was concerned “history is repeating itself”.
Referring to the “Duvant Crepelle contract of the 1990’s … the upgrade of the Avatiu powerhouse”, Arnold – who said he was involved in working on tender specification “to ensure best practice was adopted”- said a Minister at the time “… made it clear that the power authority should, instead, put its trust in the French and Tahitian governments and their chosen contractors to do the right thing by us.”
Fast forwarding to the present and the ring mains replacement project, Arnold writes, “…once again, political, relationship and cultural considerations are being allowed to trump best engineering practice; the results, if these matters are not addressed, will be suboptimal infrastructure, reduced service life, possible service disruptions – and, of course, considerable direct and indirect costs to the country.”
In this week’s CINews article, former Material Quality Specialist John Batty said the CCECC’s work on the ring mains was not up to international standards.
Batty took issue with not being allowed by the CCECC to directly observe a specific joint strength test called a “peel test” – a test the company is performing voluntarily as it is not a requirement in its contract with the Government.
Both in the past and present, cultural and language issues have been cited as challenges by Te Mato Vai officials, as well as Batty.
In his letter, Arnold said he was aware of the difficulties Batty experienced, saying the CCECC resisted “direct observation of the testing of pipe joints.”
“This must be regarded as deeply troubling and unacceptable on a number of levels,” he writes. “…it would be standard practice throughout the world to require that an independent third party witness that test and verify its outcome.”
“These are not standards that can or should be compromised in the interests of either politics or culture.”
“The ring main project is not a donor aid project, where we might be churlish to ‘look a gift horse in the mouth’. This is a commercial contract, whereby the Cook Islands is borrowing very substantial sums of money to fund the project. Moreover, the explicit condition of the borrowing is that we use the lender’s nominated contractor. We therefore do not have the usual safeguard of a transparent and accountable procurement process.”
“Public servants have frequently been cowed into withholding criticism of defects in the project, for fear of being seen as ‘ungrateful’. This is totally misguided – we have a commercial contract with a commercial contractor, and need to hold them to the normal commercial standards.”
“It’s that simple,” writes Arnold.
Anyone with complaints or issues regarding public funds or the conduct of public officials can write to PERC, said Director of Audit Allan Parker with the Cook Islands Audit Office.
In handling complaints, he said they are all referred to the PERCA committee for approval or disapproval.
PERC – which currently consists of members, Georjean Nicholas and Geoff Stoddard – then decides whether there is merit in the complaint and if an audit is necessary by providing an explanation to the Audit Office.
The Committee can also conduct an investigation themselves, as per the PERCA Act, said Parker.