‘No friction’ claim shot down 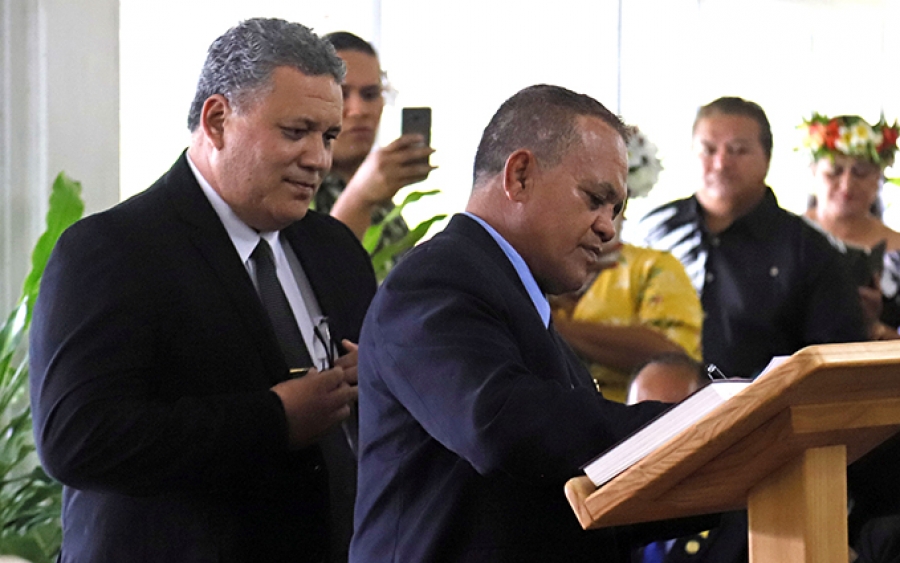 George Maggie signs on as a Cabinet minister in the CIP government, at a swearing-in ceremony at Government House last week. 18071110

One Cook Islands leader Teina Bishop’s claim that there is “no friction” within the One Cook Islands movement over George Maggie’s decision to join the CIP government has been shot down in flames by party president George Turia.

In a letter to the editor of CINews yesterday, an angry Turia claimed Maggie had asked Mauke candidate Tungane Williams to withdraw her petition against the result in her electorate.

He wrote that he was at a “complete loss” to understand why Maggie, who he said was no longer even a member of One Cook Islands, had possessed “the audacity” to ask Williams to drop her petition.

The Mauke result hangs on a slender thread, with CIP candidate Tai Tura having defeated Williams by just one vote. A successful petition could reverse the result. When Maggie, who is now a Minister of the Crown in charge of Corrective Services, Culture, Business Trade and Investment Board and the House of Ariki, had “crossed the floor” and sided with the CIP it had shocked a lot of OCI supporters, Turia said.

“But we are not crying foul or crying over spilt milk.

“We just want to get on and do what is right which has been our objective from the very start.”

Maggie’s attempt to talk Williams into withdrawing her petition showed the dirtiness of Cook Islands politics and (that) the people who were behind “this nonsense” were still trying to manipulate and politically manoeuvre to suit their own purposes, Turia said.

Turia had other particularly harsh criticism of Maggie, which CINews opted not to print.

Asked to comment on Turia’s claims, Bishop insisted that Maggie had not in fact withdrawn from OCI.

“No. There is no such thing,” he said. “In our party’s constitution, any of those decisions must go through the constituency.

There’s no truth in that.”

On Turia’s claim that Maggie had asked for the Mauke petition to be withdrawn, Bishop would only say, “I’m the leader (of OCI), not anyone else.”

He also repeated Monday’s claim that OCI did not know the terms of negotiations of Maggie’s relationship with the CIP.

And on his relationship with George Maggie, he said: “I’m driving around in George Maggie’s ‘first lady’ car and just finished having breakfast with him this morning.

“He needs my help more than ever. He’s the deputy leader (of OCI) and that’s it.”

“The fat lady isn’t even on the stage yet.