‘These are your waters’ 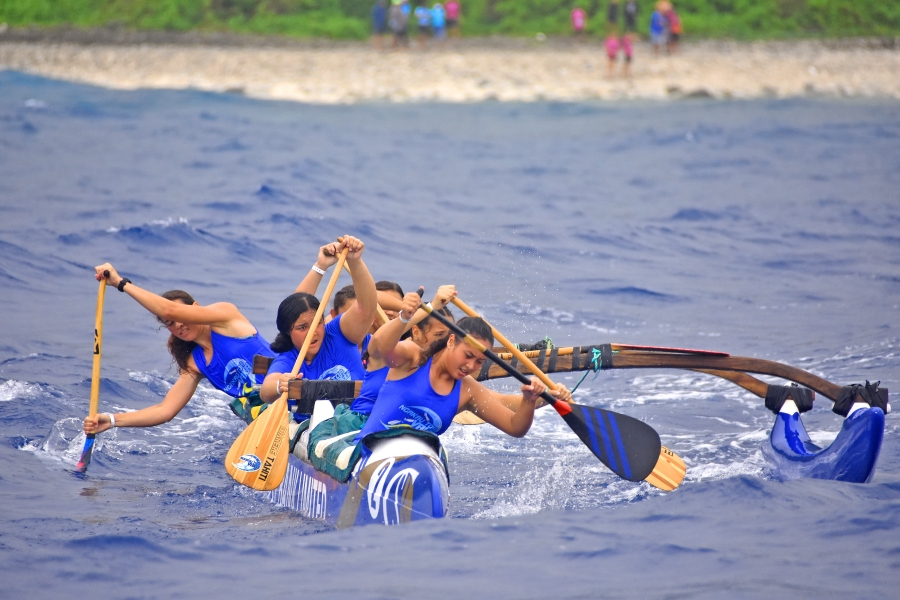 A crew of local teenage girls stole the first day of Vaka Eiva 2019, storming home in the 12 kilometre Iron race to beat the open and senior women’s crews.

The Matson Vaka Eiva 2019 got off to a great start with the first day’s racing – but in rough conditions that may be a poor omen for coming days.

More than 50 crews contested the three races on day one, with local club Ngakau Toa Vaka dominating the days racing.

The club’s young vaine stars, first-timers contesting the under 19 division, were the outstanding team of the day.

These young paddlers, aged only 14 to 16 and in their first major race, not only won the under 19 division but were the first canoe home by a margin of nearly one minute – a very convincing win.

The girls were nervous before the race, seeing the dozens of experienced paddlers from around the world lining up against them. But their coach Vaea Melvin told them: “At the end of the day girls, these are your waters.”

It had been a team effort from Eryka Tommy, Nathalie Kaina, Itirangi PennyCook, Uha Reuther-Vakalahi, and particular standout performances by sisters Jade and Lily Tierney.

Conditions on the water were very messy, with a one-metre swell and gusty winds. It gave the teams a hard day in the canoe.

“Even for the masters teams with a lot of experience, it was difficult,” said Melvin.

But her young teams were fearless: “They are comfortable with the rough conditions. They were looking forward to rough waters. The girls led from the beginning to the end.”

It was real hack and bash paddling all the way to the turn at Matavera Point, then home again to the finish line at Trader Jacks with the ocean offering paddlers no assistance or respite.

Race two saw Ngakau Toa Vaka open men dominate from the start, winning by more than a minute from the second crew from their club. Te Tupu senior master men were third canoe home to win their division.

In the women’s race, the experienced Te Tupu women certainly showed a clean pair of heels to the other women’s crews and won by more than two minutes, finishing in seventh spot overall.

The race saw the again dominant Ngakau Toa Vaka finishing first, second and third in the open division, and setting the bar high for the rest of the Matson Vaka Eiva festival.

Vaea Melvin said her U19 teams, some as young as 14, had been training three days a week on the water, two days doing weights and cardio on land. “They get on well, they enjoy each other’s company, so training is easy when you have that.”

“We’ve prepared them both physically and mentally – I said to them, it’s their water, they know their water. They have to trust each other.”

TODAY ON
THE WATER