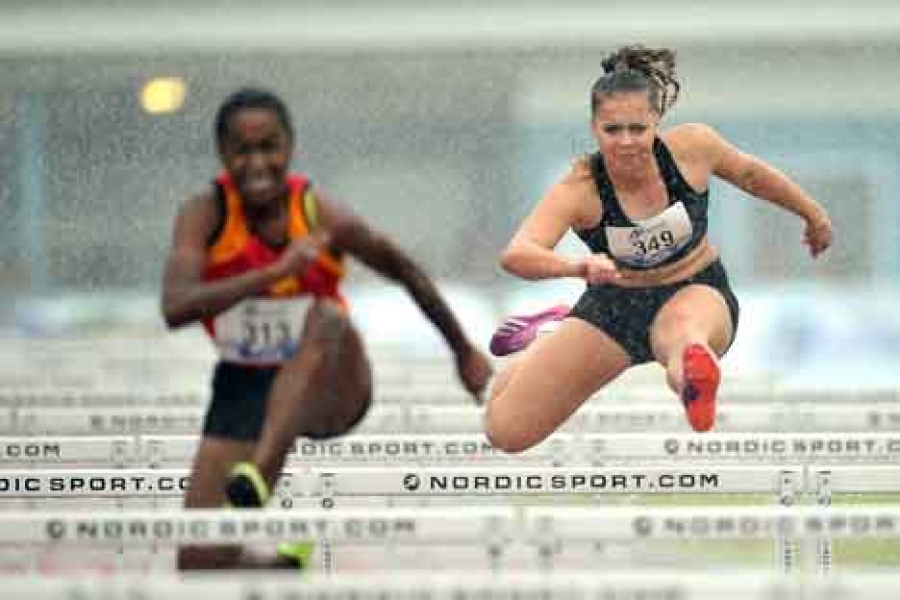 Female athletes battle the torrential rain and hurdles during their race at the BCI Stadium on Monday where wind and rain posed a challenge but certainly didn't keep athletes out of their races. 14062516

Tuesday’s torrential rain made for challenging conditions at the BCI Stadium for day one of the Oceania Area Athletics Championships, however, all races scheduled ran on time and without a hitch.

Oceania Athletics executive director Yvonne Mullins says while the weather was less than desirable – all the visiting athletes are enjoying their races.

She adds that athletes from the warmer regional islands found the torrential rain and blustering winds more challenging than the Kiwi and Australian athletes who are enjoying the “warmer” conditions.

Yesterday’s sun put a spring back in the athletes steps with another full afternoon of races on the cards including the exciting 100m sprints and relays.

Cook Islands’ under-20 athletes are holding their own against seasoned athletes from across the region with school boy Denzelle To’o winning the Cooks’ first junior medal – a bronze medal for his impressive performance in the discus circle on Tuesday.

James Harry also competed in the junior javelin event throwing to 39.69 to place fourth overall with the winning distance of 54.79 thrown by Niue athlete Ikipa Misikea.

Junior sprinters put their best performance on the track but their heat times were not enough for them to progress to the finals with Cajuniba Okirua placing 17th with a time of 11.74 while Taoa Vaevaemaki clocked 11.79 to place 19th overall.

Junior women sprinters Teiti Tupuna and Jana Purea did their best but their times of 13.67 and 14.25 respectively was not enough to qualify them to the finals of the 100m junior women’s sprints.

The fastest time in the age grade sprints was 12.27 clocked by Australia’s Caitlin Newson.

In the open women’s 200m sprints – Pacific queen of the track Toea Wisil, of PNG, was in a class of her own, clocking 24.71 to easily qualify for the finals.

In the same race the Cooks’ own speedster Patricia Taea clocked 26.06 to also qualify for the finals.

Taea also lined up for the finals of the women’s 200m race, however, she placed fifth overall Twenty-one-year-old Taea was joined by 17-year-old Teiti Tupuna, Taoa Vaevaemaki (15) and 16-year old Nooroa Maoate for the 800 mixed sprint medley with the team placing seventh overall with a time of 1.50.10.

Cooks Islands’ masters athletes are certainly having lots of success on the track and those that podium in their various races will receive their medals at a later date as they have not arrived in time for the event, however, they do receive a certificate.

One of those athletes who will receive his medal at a later date is Ben Bergman who cleaned up in the master men’s 100m sprint.

The race included all the various age grade racers with Bergman winning the race outright and the gold medal for his age grade division (45-49), clocking a time of 13.59.

Top triathlete Roland Neururer bagged another medal on the track, winning the silver medal in the master men’s 100m race 50-54 age grade division with a time of 16.33.

Paul Allsworth was in a league of his own taking out gold in the master men’s 55-59 age division with a top time of 13.86 while fellow Team Cook Islands athlete Kevin Henderson bagged another medal in the same race, winning silver in the with a time of 15.62.

Henderson’s wife Mona joined him on the podium, winning gold in the master women’s 100m race.

The championships are also being used to honour the memory of the New Zealand racewalker Lesley Cantwell and Fijian hurdler Roy Ravana Junior.

Cantwell suffered a brain haemorrhage after winning the 5000 metres walk during last year's Championships in Tahiti, and later died in hospital, while Ravana Junior was killed in a shooting incident in the United States last month.

CI News extends a big meitaki maata to Allison for sharing his photos which you can also view on his Facebook page or at http://www.harvpix.com/

The Lesley Cantwell Memorial Trophy will be presented this year for all of the race walks, in her memory, and Yvonne Mullins says the pair is still very much in everyone’s thoughts.

Today’s final day of racing will begin at 7.15am with the final races scheduled for 2pm.

Check out the Oceania Athletics website for further results.