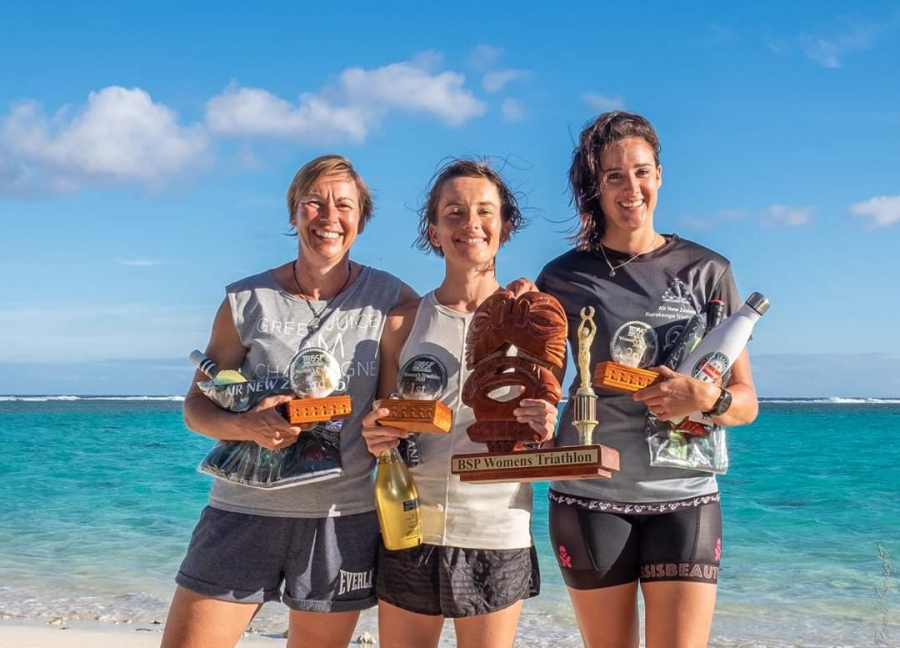 Fleet-footed Adrianna Skurosz is the new holder of the national women’s triathlon title.

Skurosz, one of the favourites in the BSP sponsored event, won the event which was held at the Aroa beach on Saturday. She finished ahead of Alyce Edwards and Lucy McDonald, who managed second and third places, respectively.

Skurosz clocked 56:24 minutes in the competition will included a 400 metre swim, 16 kilometre cycle and 4km run.

The swim was challenging for some especially with choppy waters. It was 14-year-old Seychelle Carter who exited the water first, setting an excellent pace from the start, onto the bike.

Strong winds didn’t make it easy for any of the participants and after a hard effort, first into transition at the end of the bike leg was Alyce Edwards, who recorded the fastest overall bike time of the day.

The hot sun made the run even more challenging but a super strong effort from Skurosz saw finish ahead of the rest.

Edwards finished second on 58:09 minutes followed by McDonald in a time of 58:42 minutes.

Skurosz was pleased with the win but said it did not come easy.

She was also impressed with the performance of the newcomers who used the competition to give triathlon a go.

“All girls are very passionate about triathlon and they are very committed in their training. We never assume what will happen on the race day, you just have to put your best performance on the day and anything could happen really,” Skurosz said.

“You have to come really prepared. It’s very short distances so right from the go, you have to work very hard. There is no time for mistakes.

“The turnout was really high and it was inspiring to see first timers because triathlon can be an intimidating sport, it’s very technical but a lot of girls nevertheless gave it a good go. It’s always nice to see new faces.”

Triathlon president Roland Neururer was also impressed with the turnout.

“It was fantastic to see so many ladies turn up to give it a go. Some performed the course as a team, others completed the whole distance individually,” Neururer said.

“Encouragement and camaraderie were clear as competitors cheered each other on ensuring everyone finished the afternoon on a high.”

Adrianna Skurosz said the focus was now on the Tinman Challenge which is the major national triathlon championship. The event will be held on June 13.

“This will be the last triathlon event in Rarotonga this year. All the overseas events have been cancelled and we are very lucky that in the Cook Islands we don’t have the virus and we can actually hold these races. We could be the only active triathlon club in the world!

“I’m grateful to the president Roland (Neururer) and the committee along with the sponsors for their effort in putting together these events.”

Neururer said: “It was a very successful afternoon and we would like to thank our main sponsor BSP for their continued support and the supporting sponsor the Bond Store.”

The Tinman Challenge will feature a 1200 metre swim, a 31 kilometre cycle and 10km run.

Individuals and teams are encouraged to come along and be part of the fun. Neururer said: “There’s still four weeks to continue training and get strong and fast for the day. It will be a great event.”