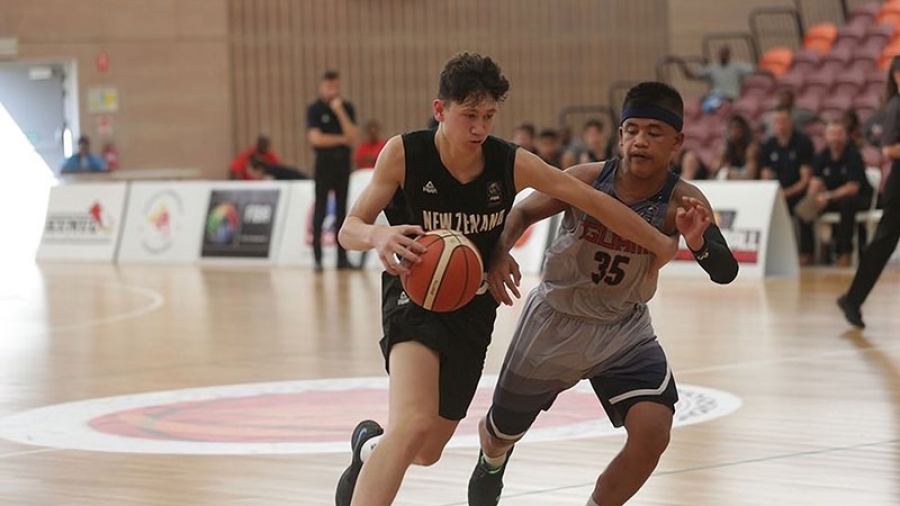 Centre Akiva McBirney-Griffin in action on the basketball court. 20062501/02

A teenager with strong Cook Islands roots is making his mark on the basketball court.

His height has been an advantage since he started playing basketball when he was 10, but it wasn’t until he decided to give up the other sports he played to focus solely on basketball that he realised his height was his greatest asset.

His commitment has paid off: 17-year-old McBirney-Griffin has been selected for the Otago Nuggets who compete in the National Basketball League (NBL) in New Zealand and Australia.

Reaching top level is no surprise given he comes from a family of sporting achievers – his dad Aaron Enoka has represented Cook Islands in rugby, league and rugby sevens.

Although his mum Tiana Griffin isn’t a Cook Islander, she grew up in Rarotonga, her mum Nikki Griffin was a teacher at school including Tereora and Titikaveka colleges in Rarotonga from the 1970s.

This year was the first time the NBL chose to do a draft, with 400 players from New Zealand.

Interest from a few teams was shown, but it wasn’t until the live draft on June 11 that McBirney-Griffin knew he was in the Otago Nuggets team. He was the 10th pick for the Nuggets and the 70th overall pick.

The NBL competition was structured differently this year because of Covid-19 with a condensed season – only six weeks in Auckland with multiple games a week.

On Thursday night (NZ time) the Nuggets played their first game against the Manawatu Jets winning 104-100.

Playing at centre, McBirney-Griffin got good minutes in the game.

His mum Tiana says he looked seamless and fitted in well, playing with all the men.

“You wouldn’t have been able to tell that he was only 17. He got a nice dunk, that made the highlight reels of the game,” she says.

Akiva lives in Hamilton, New Zealand and is a year 13 student at St John’s College.

Because of his height, McBirney-Griffin plays centre. He came up through the junior ranks as a point guard but at 15, had a massive growth spurt and changed positions.

Because of his skill set he can play anywhere on the court, his mum said.

McBirney-Griffin says he gets inspiration from players that come from humble beginnings, where passion and drive lead them to successful basketball careers.

He is now playing with some of his New Zealand idols and some of his previous coaches also play in other teams in the NBL.

Steven Adams, who plays for the Oklahoma City Thunder, has always been an inspiration to McBirney-Griffin because of his success in the NBA and also the work that he does back in New Zealand promoting and developing basketball at a grassroots level.

Once he has finished the season, he will return to school and finish off the year, while competing in regional and national secondary school competitions.

Ultimately McBirney-Griffin wants to head to America next year to attend university and play college ball.

Tiana Griffin says the support from family and friends in New Zealand and in the Cook Islands has been amazing.

“They know how hard our family has had to sacrifice to get him to all the tournaments, games and trainings,” she says.

“We wish the borders were open so his Nana Elmah who is in Atiu at the moment, could come and watch him play.”