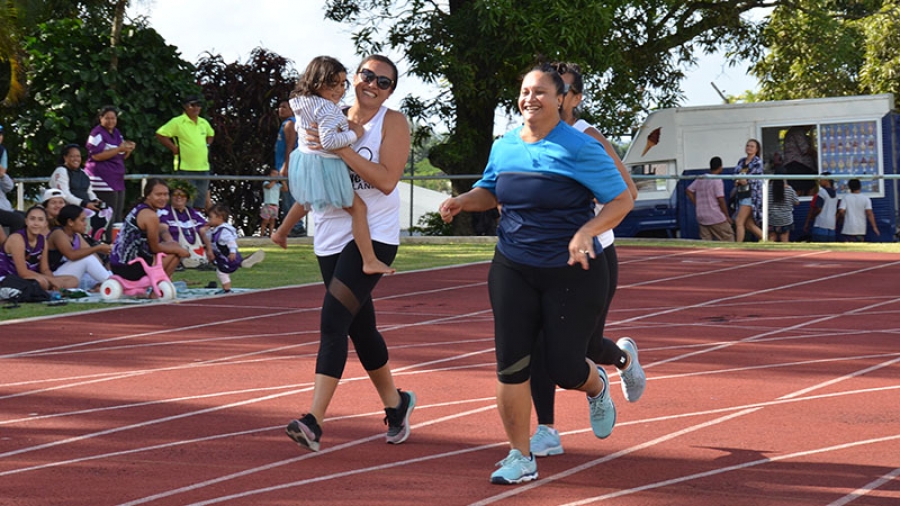 The Master Mamas rounded the 200m bend carrying babies on their hips and chasing their kids who ran ahead of them as encouragement. LOSIRENE LACANIVALU / 20062808

Strong performances from the village teams at the annual athletics meet.

Avatiu/Nikao are the new champions of the annual Kumete Sports Day held at the BCI Stadium on Saturday.

The side finished the family-friendly athletics competition on 639 points. Defending champions Arorangi finished on 444 followed by Tupapa Maraerenga 235, Ngatangiia/Matavera 75 and Titikaveka 58.

Athletics Cook Islands secretary Ruth Mave said the event was a rousing success and a wonderful celebration of community togetherness and appreciation for sporting talent.

She estimates up to 500 people attended the sunny day, with as many as 200 kids enjoying the participation and competition.

“A very different vibe was felt by all, as villages rallied to the challenge with better than ever numbers as seen from Tupapa Maraerenga. Even where numbers were low, strong team performances like the open women’s Titikaveka 4x 100m relay led by Patty Taea were stunning to watch,” Mave said.

“Outstanding individual performances in all age groups were a joy to watch but the spirit of camaraderie and community cohesion was all too much for Alex Beddoes who donned the black and purple jumper to run the open men’s relay, while making sure he didn’t add injury to his training for the 2021 Olympics.”

Proving athletics is a lifelong sport was the inspiration gained from the Master Mamas who rounded the 200m bend carrying babies on their hips and chasing their kids who ran ahead of them as encouragement, Mave reported.

“A confusion around the village relay at the end of the day saw a two race event become 10 races which held up proceedings for an extra hour, but no one minded as everyone was keen to stay and watch the relays starting with Junior 9 (5 - 9yr), ending with the fast and furious men’s open (19 - 34yr).

Mave said Athletics Cook Islands were very happy with the day and will be asking village leaders for feedback on how they can make the event better next year.

“Athletics Cook Islands would like to give a big meitaki maata for all the village organisers, the executive, volunteers, families and athletes who made the day a memorable success.”