Acing it on the court for his mum 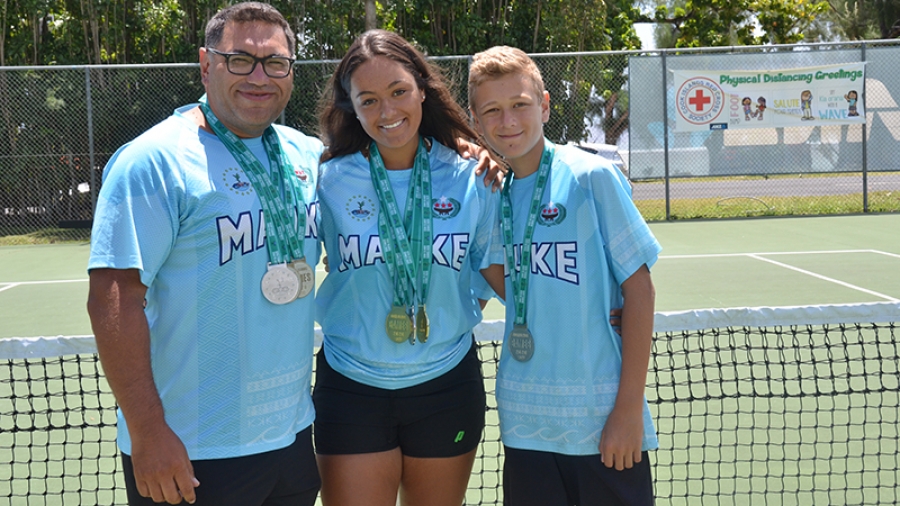 Jason Pierre and his children Ruby and Luke represented Mauke at the Cook Islands Games. 20101623.

Winning medals in the Cook Islands Games tennis competition was bittersweet for Jason Pierre and his family.

While playing in the men’s singles final against the country’s top player Brett Baudinet, Jason Pierre’s thoughts often turned to his mother Beverly.

Beverly, who passed away suddenly last year, was an avid tennis fanatic.

She had never missed their tennis matches and would have been the loudest supporter cheering them on.

Both Pierre and Baudinet have represented the Cook Islands overseas, the match was their first as opponents with Baudinet representing Rarotonga winning the gold 7-5 6-3.

He had wanted to play Baudinet for some time and although he felt pretty disappointed that he lost, “I’m pretty happy that I lasted for as long as I did, but it was so hot”.

Jason first held a tennis racquet at the age of 14, he really had no choice, his mother loved the sport.

“Mum made me do it,” Jason grins. At the time he was playing softball in Wellington.

“She couldn’t drive me to my games because of her tennis, so I had to play tennis.”

And why does he love the sport?

“I love that you can play tennis for your whole life, at my age I’m pretty old and I still won a medal, how can I not love that.”

Taking to the court with daughter Ruby for the mixed doubles final was one of the most special memories of his life and seeing his son secure a silver medal was a big surprise.

He had desperately wanted to win the mixed doubles final with Ruby, but due to an injury they had to settle for silver.

The father and daughter duo have played together in the past when living in New Zealand, but both feel it is really special playing here at home in Rarotonga.

“Because you know people and they’re watching you…”

Ruby played top seed Davina Hosking-Ashford in the open women singles final, they too had played together in the past representing the Cook Islands and this was their first opposing match.

She admits she had a little bit more confidence playing her previous matches.

“I played for Nana, definitely in my singles the women’s open was the event I was most determined to win, that was when I wanted to make Nana proud, so I was really relieved, I came off the court thinking of her.”

Challenges of the tournament were the number of people who had registered - there were 100 plus people in every category, so one person had to play a lot of rounds.

There were four or five rounds to get to a final in one division, when you’re in three it’s massive. All up Jason says he had spent about 20 hours on the court.

Because of the games the crowds at the courts were astounding.

It was the first time he had seen so many people at tennis.

“Usually it’s a desert wasteland, Malcolm is here every day but apart from that…” he says.

“A few weeks before the games you were lucky if you managed to get on the court for practise.”

An outcome from the games, Jason says is that Tennis Cook Islands will now have a ranking system. Every person who played will be ranked.

“I’ve heard legend of how people used to play tennis but I’ve never actually seen it until these games, it’s been great,” he says.

“We need to keep the people who played.”

Aside from the beauty of hidden talents that are shining through in our youngsters in the games, another gem is that families including parents and their children competed alongside one other.

Pierre and his children Ruby (16) and Luke (13) won seven medals between them for the island of Mauke.