Thomas Tarurongo Wynne: Covid shines a light beneath the surface 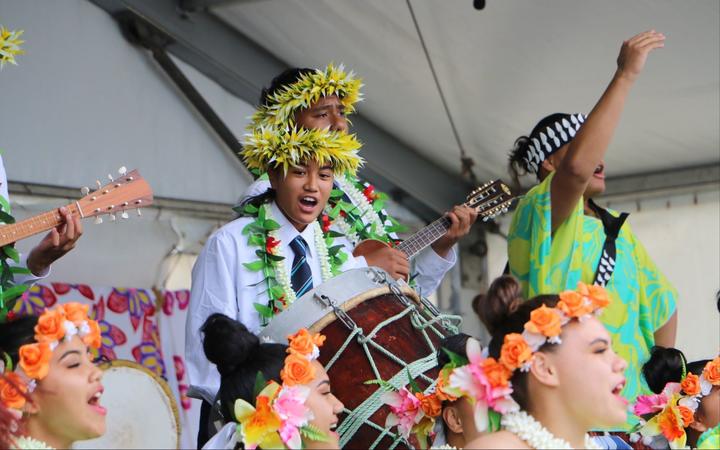 Māngere College Cook Islands group at the Polyfest in Auckland. About 60 per cent of Cook Islanders live in Aotearoa. Photo: RNZ / Mabel Muller/21041649

Depopulation, addressing the poor lowly minimum wage, or the dependency on a single tourism income stream as a source of national income, are not new issues, writes Thomas Tarurongo Wynne.

Toketoke enua, the metaphor of the earthworm, from the earth’s surface, digging deeper into the soil, and so deep into the earth that it becomes one.

And on that journey grasping the reo, understanding who our tupuna are and standing on one’s paepae, one’s place of belonging.

None of this I would have been able to achieve or understand without moving and living in our Ipukarea, and it is this deep sense of connection I so miss, while working and living here and look forward to when we return.

Nonetheless it is so much more meaningful being here and possessing that deeper sense of knowing who I am, who I am connected to and where my standing ground is, in this constantly changing and post Covid world.

If there is one thing our people born here of Cook Islands descent – now 60 percent of our 82,000 in Aotearoa – long for, it is a deeper sense of connection to home.

That sense of being connected to that which identifies us, that which makes us unique, and that which gives us a deeper sense of authenticity and identity. And if there is one thing that those of us at home could better understand, I believe, is how also to connect with the resource that is our people and replenish our Ipukarea with the skills they have acquired while here in Aotearoa.

Depopulation of the Cook Islands has been a discussion lately and it was heart-breaking reading comments online about the slow but steady trail of people leaving for maybe better wages, better jobs, and security.

But this is not new; in fact, our people have been steadily leaving for the past 50 years. This was accelerated by the International Airport being built in 1973, the economic collapse of 1996, and now a global pandemic.

And I have struggled to find any government over the years that has intentionally set out, and with a figure in mind, to incentivise our people to return home.

Depopulation has quietly simmered beneath the surface, a gap quietly covered up by now more than three thousand foreign workers in Rarotonga and why I think it is simply dishonest to say that Covid-19 created this problem when all Covid did, as it has done all around the world, was pull the covers off an issue that had often already existed.

In a paper called ‘The politics of association: a comparative analysis of New Zealand and United States approaches to free association with Pacific island states’, John Henderson says that indeed, depopulation may turn out to be the most devastating legacy left by the New Zealand-Cook Islands relationship.

He notes it has not happened to the same extent in other Pacific island countries because only Cook Islanders and Niueans have automatic rights, as citizens of New Zealand, to enter New Zealand.

But this privilege, the envy of other Pacific islands, he concludes, may turn out to be the curse of the relationship as its consequences call into question the future viability of the Cook Islands and Niue.

He adds that the many empty houses which are a feature of each Niuean village (and Cook Islands outer Islands, or the combining of schools) are stark evidence of the trend towards what he hauntingly called an ‘empty’ country.

Depopulation, addressing the poor lowly minimum wage, or the dependency on a single tourism income stream as a source of national income, are not new issues.

Governments exuberantly spending on themselves while asking for restraint is also not new, and neither is the nepotism of people hired for jobs that they have little capacity for, or being fired because they dare to speak up.

It is not Covid that has caused our people to leave; it has simply brought these things to the surface and clearly identified a number of the pressing issues that keep our people from returning home.

Sadly, in the end, we both miss out. Those in Aotearoa because they cannot, like the toketoke, dig deep into the earth of our Ipukarea for the treasure that lies there. And those at home, who need our people to return to bolster our population and skills shortages.

Whatever side of the problem you are on, what is clear is that we are in dire need for change. And though change is something we struggle with, the election in Samoa clearly shows that in the end people reach a point of enough is enough.