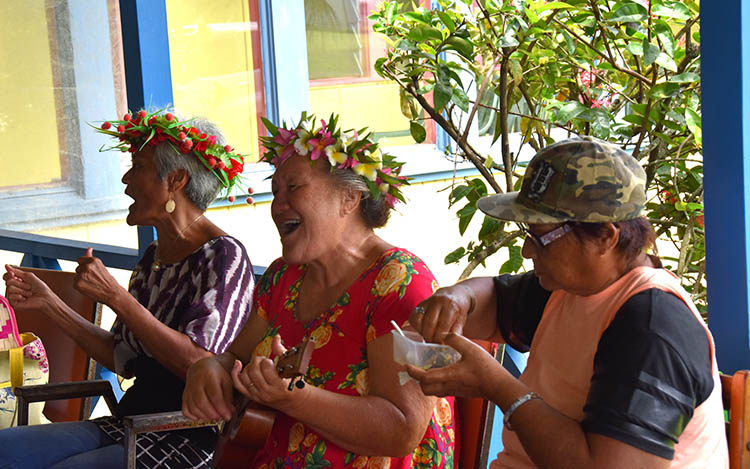 Senior citizens of Rarotonga enjoy the services of the Are Pa Metua. 20122434

The more we plead poverty the more we sit with our hands in our laps looking mournful like a Labrador dog, the more we lose our self-drive, pride, mana and self-identity.

When people buy a big house, they don’t need, to impress people they don’t know, with money they don’t have, so they have to stay in a job they don’t like, to pay the bank (who own the house) more money than the house is worth, they become slaves to the system and a pawn in the economic and political machinations of life.

Mark Brown subtly suggested ‘we’ need a house for the Prime Minister to live in, because we need to be seen as a developed nation now that we have crossed over the ‘developed nation line’ of success. Kata’s cartoon showed a traditional Are is built and the Prime Minister character is holding a blueprint of what looks like the American White House design, muttering “that’s not exactly what I had in mind…”  The reality is we already have a white house opposite the auditorium and while we call for our culture and independence to be recognised what we need is a locally designed ‘Brown house’ especially now we have a Brown Prime Minister a Browne Opposition leader, two Brown Members of Parliament who are supposed to represent all of us other brown people.

There has been lots of building going on for Prime Minister Brown at Parliament, first the overbudget Parliament chambers $700,000 at a time when they only sat nine days per year. His own private Cabinet chambers another $100,000 for the select few to meet and currently more building and painting at the government compound, but still no place for our Ara Metua senior citizens to continue to meet daily.

Who are we trying to impress with buildings we don’t need? We are paying $30,000 for the site of the Queen’s Representative which is never used. Could the Ara Metua meet there? Parliament could use the resorts for their conferences and meetings as they did at the Crown Beach for $100,000 when their big expensive white elephant building wasn’t ready. It doesn’t stop there either, buying 20 cars for $600,000 to pick up dignitaries for Pacific Forum Economic and Trade Meeting 2015 to impress them. It appeals to my sense of humour that we can justify pleading poverty when we are driving flash new cars, and even now as a developed nation, who has awarded Members of Parliament a 45 per cent pay rise, we can put out our hand and pocket another $30 million added to the $7 million from New Zealand for economic recovery from Covid-19.

There is a great book by Ayn Rand written in the 1960s about capitalism, it was written by a Russian woman who defected to America during the time of Communism in her home country. In the story her heroine is a self-reliant, hard working woman who rises up through the male dominated world of railways earning her positions due to sheer hard work and intelligence while her brother achieves the top accolades by having a penis. Rand paints a world where the idea of helping or rewarding the poor and suffering only leads to more poverty and suffering as those who do not wish to help themselves with a hand up instead only want to help themselves to free hand outs with no accountability, ultimately creating a world where everyone competes to be worse off than the next. Pride is lost and if one person is sick and needy, the next is sicker and needier and on and on it goes. The more we plead poverty the more we sit with our hands in our laps looking mournful like a Labrador dog, the more we lose our self-drive, pride, mana and self-identity.

During 2020 government workers had more money not less. They remained in their jobs with same wages, they benefited from discount power, better phone packages and had 70 per cent of their interest rates paid. I wonder how many actually used this time to get ahead, and continue paying their pre Covid interest off, or did they like many take staycations here and in Aitutaki, live up life to the max? There are people who have a big shiny truck on hire purchase, that everyone sees them drive around, while back at home it’s parked next to a tin shack and the kids have bread, lollies and vaiora to eat.

Monkey see, monkey do is the saying and if the government justify how they can make poor economic decisions then the people think they can too. It’s a matter of priorities and government have a me first priority with a veneer that says it’s for the benefit of the people but our old people only got a single, $400 payment from the Covid budget. Let’s stop trying to impress nations with being the best dressed beggar, instead let’s impress other’s by how we treat our vulnerable citizens instead.