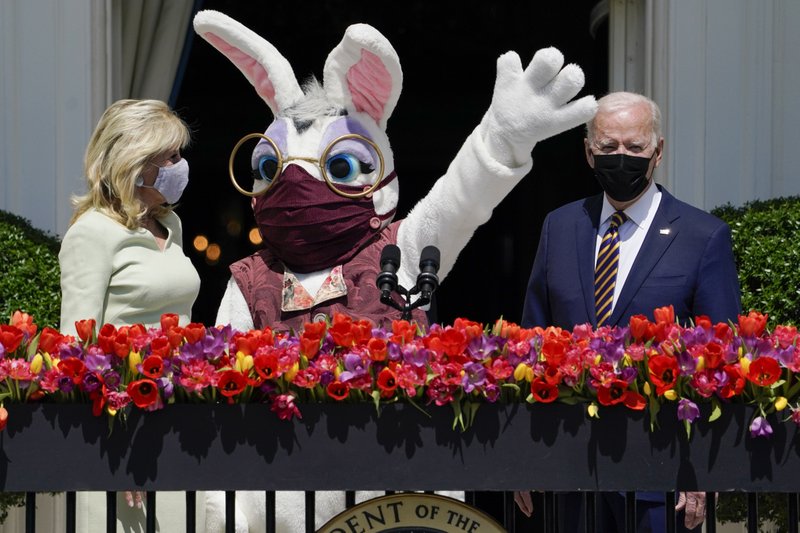 President Joe Biden appears with first lady Jill Biden and the Easter Bunny on the Blue Room balcony at the White House, Monday, April 5, 2021, in Washington. The annual Easter egg Roll at the White House was canceled due to the ongoing pandemic. (AP Photo/Evan Vucci)

What comes first – the chicken or the egg? An age-old question which like the egg itself has no beginning or end, similarly, the idea of a rabbit distributing eggs, writes Ruta Mave.

Easter symbols follow the birth of spring in the northern hemisphere, whilst down under, it’s supposedly Autumn. Just like us celebrating a snowy Santa scene at Christmas, but no one cares so long as the eggs are chocolate.

For centuries brightly painted eggs were given out – it was 1875 when John Cadbury made the first chocolate egg. Now 180 million eggs are purchased every year, the average child eats eight. Cadbury crème eggs are most popular. Brazil eats the most eggs, followed by South Africa, Germany, UK and France. Candy, lollies, sweets are also given out and 81 per cent of parents steal some from their children’s basket. In the USA, 91 million chocolate bunnies are sold annually, 89 per cent of Americans eat the ears first and 51.8 per cent think the Bunny came before the egg.

Several religions, cultures, traditions, Ancient Egyptians, Romans and Inca’s all have eggs at the centre of their creation stories. One tribal story says an egg drops into the ocean with all the mothers and fathers yet to be born lie sleeping in it. Skirting religion, scientifically, there are many fun facts about eggs that show them as a microcosm of the universe.

In 2006 Nasa’s Wilkinson satellite said the universe we live in might be an ellipsoid, an oval, the shape of an egg, it’s not confirmed. In 1609 Johannes Kepler confirmed the planets go around the sun in an egg shape elliptical orbit, as does our moon which is why it appears to change shape during the month. The egg shell looks like the surface of the moon with 17,000 little craters. The shell is semi permeable and allows air and water to pass through it. However, if you dip it in wax and seal it completely it will last for decades. The shape of the egg is the pinnacle of architectural design, it has no internal solid support but it is strong enough to protect life growing inside and when stood end on end you can balance heavy weights on an egg. Try crushing one in the palm of your hand. End to end, not sideways.

Eggs are made of protein which has the perfect make up of amino acids to build human tissue, second only to mother’s milk. Eggs have also become part of our everyday dialogue. In the movie ‘Boy’ it was a term of endearment to be an egg. You can be a good egg, or a bad egg, one might be an eggscellent eggspert, I’m not yolking, well not eggsactly. Well, okay, that was good to know but boring.

Easter fun day is Sunday because that’s when the Easter Bunny comes and leaves us Chocolate eggs.  I love this part, mainly because since the kids were little, I have set up an Easter egg hunt for them. Granted when they were younger and not allowed sugar, I would wrap grapes in coloured foil and they thought it was great. My friends threatened to report me for child foul play.

When they started school, I had 12 plastic reusable eggs and I would cut up one marshmallow egg into equal pieces and hide them. My friends were still on my case. As teenagers they graduated to real chocolate eggs and it was always fun to hide them, no rules, no clues. Remarkably, they can find 10 tiny eggs hidden in a house full of stuff, but they can’t find their homework in their bag, or food in the fridge.

I hear parents say, ‘thank goodness my kids don’t believe in Easter bunny anymore meaning no egg hunts’. Where’s the fun in that? I find it’s a great life lesson in setting goals. If you leave them to their own devices they give up after 3-5 but if you say there is more, they’ll go for another round maybe, 8 or 10 then stop, not expecting more. Tell them 20 exist, they become persistent and inventive and frustrated when they can’t find them but if the goal is great enough, they’ll continue until it’s done.

Teenagers are easy, you put them where they don’t go, like amongst the dirty dishes there’re supposed to wash. Egg hunts create inquiring minds needed by inventors, for projecting an imagined goal with no instructions on how to get there, except by their own wit and determination. I like creating family traditions, the worst is as I get older, I forget where they are and don’t find them until I open the marmite jar, or follow a line of ants.

In answer to the age-old question, a sexist would say it’s not the Easter Bunny, it’s the Rooster.