Having the power to lift 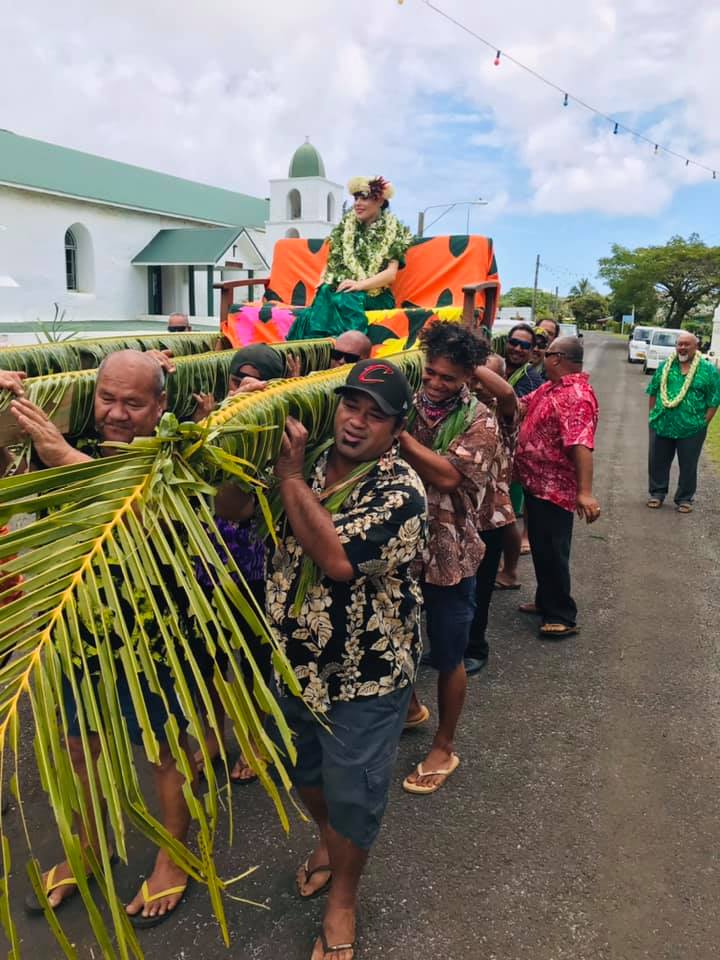 People of Atiu carry New Zealand high commissioner to the Cook Islands Tuwi Dewes on a pa’ata during her visit to the southern group island this week. “A traditional paata ride, with an unexpectedly large number of bearers! A beautiful and humbling experience,” read the caption of this picture posted on the New Zealand High Commission, Rarotonga, Cook Islands Facebook page. 21100118

The pa’ata is a powerful, modern and traditional Cook Islands symbol for us all and clearly demonstrates that power is actually in our hands, and sits on our shoulders.

A team of 16 of us were designated the role of carrying the weight of regional and international leaders upon our shoulders when the Pacific Islands Forum opened in Rarotonga in August 2012.

I remember meeting (former NZ prime minister) John Key at Parliament last year and remembering that moment nine years ago when he looked down as we hoisted him up, and I said to him ‘Don’t worry John, we got you’.

Julia Gillard, former Australian prime minister, would follow, then a steady stream of leaders would be carried to the auditorium entrance, with Australia’s Gillard and the President of the Solomon Islands amongst the many that day.

Being carried on a pa’ata traditionally was reserved just for ariki, and not all ariki, as it is little mentioned outside of Rarotonga or in other parts of the Pacific.

Matai in Samoa walk as do royalty in Tonga, with the only time a king or queen being carried in Tonga is when they pass, and for Tongan King Taufa’ahau Tupou IV, a thousand pallbearers carried him to his grave.

Here in the Cook Islands we carry everyone from police chiefs to other dignitaries, prime ministers and ministers of the Crown, even the New Zealand high commissioner was recently carried on a pa’ata when she arrived in Atiu, and yet there is little – if any – mention of that practice being performed in Atiu or for our ariki in the Pa Enua.

Carrying people on a pa’ata has become a modern understanding of an old custom and one that I would suggest says more about ourselves then it does whomever we may be placing on that platform and then upon our shoulders.

There is nothing more secure or safe than when we see a parent, a dad or a mum, carrying a child upon their shoulders and this again speaks to the depth of relationship, safety and security and power of carrying one on your shoulders.

Should we hold them to account, should they be responsible for what they do and see both in secret and in the public domain, because as the pa’ata tradition clearly shows, it is we who put them there?

And what should also be clear is that it is also we who can bring them down again should they no longer be worthy of that elevation.

We need to understand that we have a critical part to play in their role in our lives because they are public servants, which means they serve the public and not themselves.

Because if we continue to hold them up with this pa’ata view of power – putting them up and not holding them to account – then it is we that should be held to account and not them, and we that need to take a long hard look at ourselves.

Because in the end it is our decisions that have enabled their behaviour that in the end hurt and cripple the integrity of our government, our churches, our traditional leaders, families, and ultimately ourselves.

Our faith is clear that when someone falls, pride was a critical part of, or the reason why. I ask, is it our own sense of pride that we put people on platforms without any sense of accountability, crushing our trust and aspirations in the process?

In my own life whenever I have put anyone on a platform it has always led to great disappointment and something I have endeavoured not to repeat.

The pa’ata is a powerful, modern and traditional Cook Islands symbol for us all and clearly demonstrates that power is actually in our hands, and sits on our shoulders, and that is my point.

We elevate people and it is we that can also remove them from our shoulders when they no longer respect or live by the honour, position, and trust we afford them.

Simply put, if the shoes fit, put them back on, and as we lower the pa’ata, get off and walk the road where the dust meets your jandals and remember who it was that put you there and who paid for it.