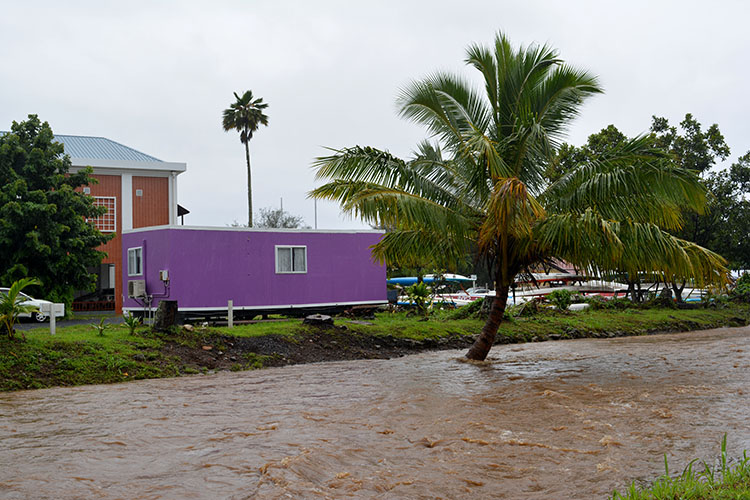 Water levels were rising at the stream in-between the Ministry of Justice and the Empire Theatre and Little & Matysik law firm. 21022316

The heavy downpour yesterday caused floods, disruptions to traffic and damage to roads in the Avatiu and Nikao areas. And the Cook Islands Met Service says Rarotonga could see more rainfall before the end of the week.

A culvert on the back road of Ruatonga was blocked by debris, coconuts and a large tree stump that caused the water to surge over the road yesterday afternoon.

Member of Parliament for Ruatonga-Avatiu-Palmerston-Panama-Atupa (RAPPA) Albert Nicholas and Mia Taripo were seen removing the large log from the culvert to allow a clearer passage for excess water from the heavy rainfall to flow through.

Early yesterday afternoon, nearby resident Makiroa Mitchell said they were OK, “the water was only ankle high” and had not reached inside her home.

Mitchell and her family have experienced the devasting effects of floods on their home for many years. “We are at the lowest point so we get the full impact of heavy rain, it does get frustrating but we are accustomed to it.”

A drainage culvert near their driveway was blocked off and covered during the redevelopment of Avatiu harbour in 2011- 2013, to ensure silt from floods did not flow into the harbour and affect the entry and exit of domestic and international vessels.

“My mother (the late Mama Keu Patu Mitchell) knew this and for the wellbeing of the nation, she agreed,” said Mitchell.

On the positive note, Mitchell said the rain was a blessing after a recent dry spell saw water levels at Rarotonga intakes drop dramatically.

“We all have got lots of water now.”

Water from the hills gushed smoothly under “Vaimutu’uri” – the new reconstructed Avatiu bridge that opened last year in September.

The $3.6 million bridge was built to prevent damaging flood water spilling over the Avatiu stream bank into residential and business properties.

Along the Nikao airport main back road, rain poured down in torrents on the inland access roads causing flooding in the area.

Police personnel were visible along the stretch of the road to Tereora College to ensure public safety. Tereora College closed early yesterday due to the extreme weather conditions.

The water level of the stream at the Empire Theatre looked dangerously close to spilling over its banks on both sides in the afternoon; coconuts and floating debris were scattered in the sea near Avarua harbour.

Last week on Manihiki, storm like weather caused some damage to some of the wharfs and seeding platforms.

Island resident JeanMarie Williams said: “We are not worried about the weather because we are well advised from the weather stations and these days we are prepared. The rain is not a problem and we are all well here.”