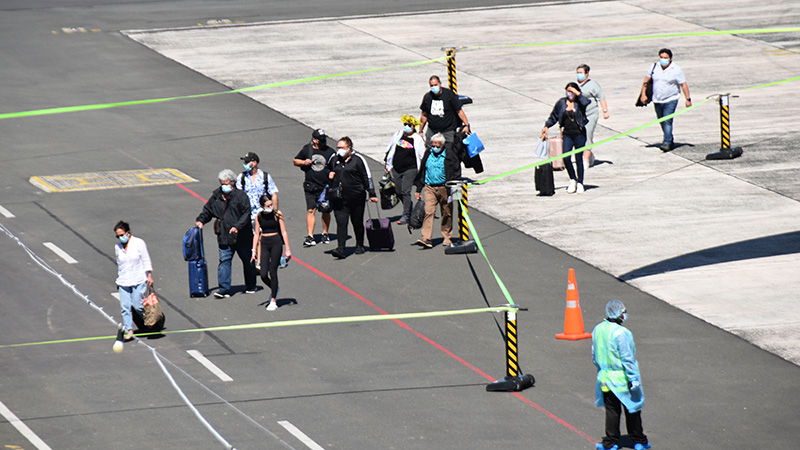 CT scanner not a good idea

The missing person notice featured on Saturday evening television turned out to be a false alarm. At 11pm on Saturday, a couple reported their nine-year-old granddaughter missing. They also put out a notice on local television. However on Sunday, they told police that she had gone to stay with her uncle but they had not […]

It was clean up day on the first day back at school for Nikao Maori School students. Classrooms were emptied of desks and chairs and floors swept to make for a clean learning environment. That was the case for the senior students of the school. Junior students went about making friends as they waited to […]

It was a busy week for police, dealing with one case of assault, three cases of unlawful taking, one case of theft and six burglaries this past week. They also made three arrests, visited six motor vehicle accident scenes and received six noise complaints, in the week to Sunday. Last Friday, tourists hiring a private […]

Political reform must go hand in hand with public service and business sector reform. The three must go together. I am in support of reduced seats and changing the current political model in parts. But I am not in favour of overhauling the whole political system and adopting a new model altogether. That the new […]

Avatea pupils roll up for 2010

Avatea School has seen a boost to its student number this year with just over 300 students already enrolled. Principal Nga Charlie says last year the school had about 280 students and the increase this year is welcomed. More students are expected to enroll this week and there have been several new students apart from […]

Avarua full at the start

The start of the school year at Avarua is always a difficult time for principal Gelling Jack. Yesterday the principal of the country&rsquo;s biggest primary school was having to deal with late enrolments, from new entrants right up to the senior classes. &ldquo;It&rsquo;s been very difficult especially as we don&rsquo;t want to turn parents away,&rdquo; […]

Back to Blackrock for preschoolers

Kids poured in through the Blackrock Apii Potiki School gate in Nikao without a tear or tantrum in sight! In fact, it was the parents who looked sad to leave their children at the preschool with one mum commenting, &ldquo;I think I&rsquo;m the one with the problem &ndash; look my son doesn&rsquo;t even know I&rsquo;m […]

Last week the boys in this photo &ndash; brothers Drejun (10), Tayne (7) and JJ (5) Rongo along with their uncle Teavaiki Toa (4) &ndash; just couldn&rsquo;t wait for school to start on Monday (today). &ldquo;The holidays was too long,&rdquo; said Tayne. &ldquo;I miss school,&rdquo; added JJ. Over the school holidays the boys have been […]

A parent's day – it's a balancing act

This article is a personal reflection of one parent. It&rsquo;s intended to emphasise how important your role is as parents working closely with your child, whether it&rsquo;s back to school or end of the school year. Situations may differ across homes, however common across the board is our striving to provide our children with the […]

Bus is cheaper in long run

Cook&rsquo;s Bus company operator Kevin Cook would like to remind parents of schoolchildren that the bus is &ldquo;a lot cheaper than running a car to school&rdquo;. &ldquo;A lot of parents think they can do it more economically by taking their children to school in the mornings and having them ride the bus home. &ldquo;But we&rsquo;re […]

About 65 teachers and school administrators met this week to discuss the offer of masters and PhD programmes in education at the University of the South Pacific, starting in April. The meeting was attended to by education secretary Sharyn Paio, the head of USP&rsquo;s school of education Teweiariki Teaero, and Violet Tisam from the department […]

A seventy-five-year-old man from the island of Pukapuka makes up the list of Cook islanders set to receive one of four New Year&rsquo;s honours. Mangere Malo will receive a BEM for services to the public. The former health inspector and police officer was educated in Rarotonga before being posted to the island of Man-gaia. He […]

Edgewater names 2 staff of the year

Two Edgewater Resort and Spa staff were recognised on Friday for their outstanding work by being named as &lsquo;staff of the year&rsquo;. Joan Ngati and Rouvi Auua were given the staff of the year awards by the resort&rsquo;s general manager Chris McGeown in front of their cheering colleagues. McGeown says that the purpose of the […]

Minister 'going to the people' on infrastructure problems

Minister William &lsquo;Smiley&rsquo; Heather wants to tackle Rarotonga&rsquo;s water supply, road and waste management issues &lsquo;with the people&rsquo;. The Ruaau MP was appointed minister of infrastructure and planning (MOIP) shortly before New Year and already he&rsquo;s taking a new approach to the way ministers have traditionally worked by putting more emphasis on &lsquo;going to the […]

A national project which aims at reducing carbon emissions and domestic power bills was launched yesterday by deputy prime minister and minister for Te Aponga Uira Robert Wigmore. The project aims to introduce low energy light bulbs into all homes and educate the public on the advantages on using these over the standard incandescent light […]

Due to popular demand the Vaevae Challenge will start up again on May 10. May 10 is also World Move for Health Day. The Ministry of Health initiative is aimed at getting people to be more active and achieve 30 minutes of physical activity on most days. The programme&rsquo;s other objectives are to provide individuals […]

With the annual Mire Atu composer&rsquo;s competition scheduled for Thursday March 4 &ndash; all local composers are urged to prepare songs for the first Ministry of Cultural Development event of the year. This year&rsquo;s theme is &lsquo;Te au tuatua pakari o toou enua e te Matakeinanga&rsquo; (The wise sayings of your island or tribe). In […]