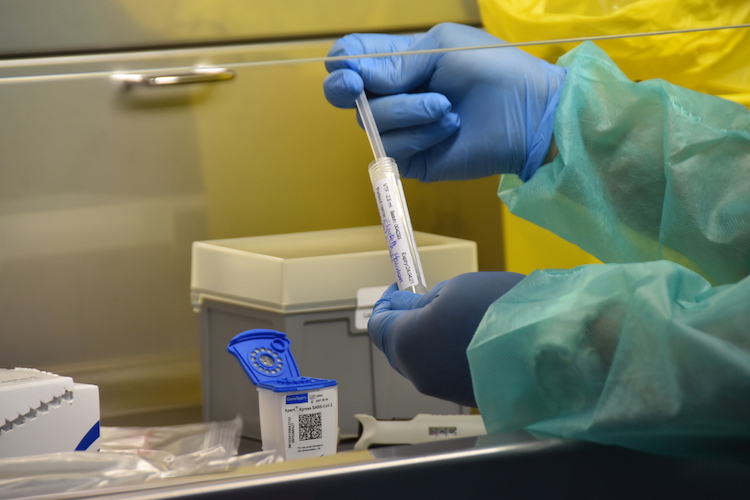 Health ministry staff carried out a flash contact tracing and testing drive beginning Tuesday night through yesterday following the case of an Australian tourist who visited Wellington and later tested positive for Covid-19.

Thursday 16: While primary students were back hitting the books this week, their high school counterparts were still enjoying time off. The Ministry of Education says high schools in Rarotonga and the outer islands were given an extra week for the Easter holidays as they had started a week earlier in January. The college calendar […]

Monday 20: Miss Cook Islands will now be driving around in style. Engara Gosselin accepted her blue Honda Daelim motorcycle at the Motor Centre last Friday. The $3450 bike was part the prize package she won after being crowned Maine Kuki Airani this month. Gosselin says she is happy to be the first Miss Cook […]

Thursday 16: Westpac Bank will be celebrating its new ATM today by raising funds for the children’s ward at the Rarotonga Hospital. A $2 sausage sizzle will be held from 11am to 1pm outside Super Brown in Tupapa – the latest location to receive a Westpac cash machine. Westpac general manager Rob Buick says the […]

Monday 20: The National Environment Service is putting up $2500 to encourage community groups to use in waste reduction and management projects as part of its waste education campaign this year. NES is making five lots of $500 in seed funding available for ‘any good community-benefiting waste activities groups or individuals may have.’ Any youth […]

Thursday 16: Miss Westpac Julia Scott has quite a way with words. So much so that she was awarded a Toshiba L300 laptop yesterday for her composure and intelligent answers during her Miss Cook Islands pageant stage interview. In front of a near sell-out National Auditorium earlier this month, Scott impressed the audience and the […]

Monday 20: While preparations for the opening of the Cook Islands Christian Church’s biennial meeting were taking place within the Nikao mission grounds, a silent protest was taking place across the road. Eight banners depicting messages relating to the dispute between Tepuka tenants and the CICC, were staked into the ground on a vacant section. […]

Saturday 18: DPM Sir Terepai Maoate is expected to head a delegation to New York in August to address the Commission on the Limits of the Continental Shelf. It is then that Sir Terepai will make a formal presentation of the country’s extended continental shelf claim at the United Nations in August. Speaking from New […]

Saturday 18: Secretary of the Infrastructure and Planning ministry, Taukea Raui has responded to some public criticism this week of the delayed completion of road sealing work on Maire Nui Drive. Yesterday he told CI News that to complete the work which began last month, the road works crew needs at least three consecutive days […]

Tuesday 14: Prime minister Jim Marurai has sent a congratulatory letter to former NZ prime minister Helen Clark on her recent appointment as administrator of the United Nations Development Programme (UNDP), in New York. According to Marurai’s office, the letter was forwarded on behalf of the government and people of the Cook Islands, and best […]

Tuesday 14: The Pacific islands News Association ( PINA) has called on the newly established interim government of Fiji to leave the media alone to continue to perform its role of information dissemination to the people of Fiji and the region. President Joseph Ealedona says the actions are deplorable and is an indication of a […]

Saturday 11: Chief health inspector William Taripo says the dengue clean up campaign carried out by public servants on Thursday identified even more mosquito breeding areas on the island. Taripo says public health hope to collect all the data together from the tutaka and surveillance work they began a week ago and use it in […]

Saturday 11: An information evening for those thinking about attending Brigham Young University in Hawaii will be held tomorrow. A graduate in information technology, William Numanga, says the evening will be for prospective students, those who may not have fully completed their studies, and former graduates from BYU. Numanga says numbers from the Cook Islands […]

Business as usual for public health

Saturday 11: While there have been some calls for the Tobacco Control Act 2007 to be reviewed, public health staff are gearing up for when the legislation takes full effect on June 1. Health promotion manager Edwina Tangaroa says that ongoing awareness will continue, with visits to workplaces on Rarotonga in the coming weeks, on […]

Thursday 9: Pacific Forum Line has announced that it has secured its new vessel, the Forum Avarua. Forum Avarua is fully container-fitted for over 160 TEU (20 foot containers) of which 18 are reefer slots. She has two cranes each at 35 tonnes and is strengthened for heavy lifts. At this stage the Forum Avarua […]

Thursday 9: Meningococcal (meningitis) disease symptoms may include a high fever, headache, vomiting or refusal of feeds, sleepiness, a stiff neck and dislike of bright lights, joint and muscle pains and a rash. It causes meningitis (an infection of the brain membranes). Meningococcal disease is most common in children under the age of five years, […]

Wednesday 15: The Cook Islands Sports & National Olympic Committee’s 2008 annual report, which was tabled at the organisation’s annual general assembly last night, is full and comprehensive. In his address, president Tiki Matapo says the country’s participation at the Olympics, the Manea Games in Aitutaki, the success of the annual Vaka Eiva, and the […]

85 checked for disease in Aitutaki