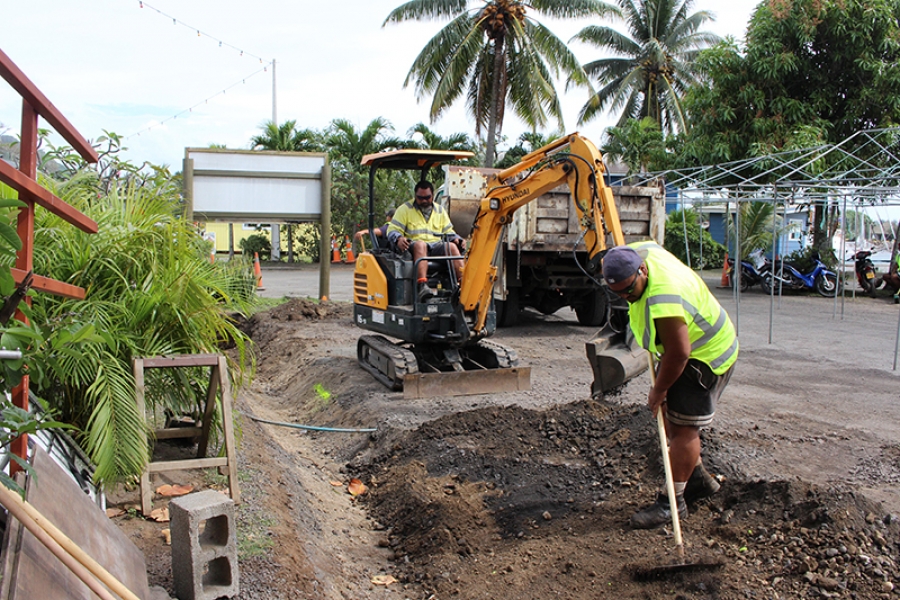 Government has extended the wage subsidy and other grants until the end of June, bringing some relief to businesses and workers affected by the Covid-19 pandemic.

Saturday 28 March: A national thanksgiving prayer service planned for tomorrow to coincide with the end of the cyclone season will now be handed over to all the local churches and denominations. This is because of the unavailability of the National Auditorium which is being set up for the Miss Cook Islands Pageant next week. […]

Wednesday 1: Locals involved in the production of a Shortland Street episode being shot here were kept busy yesterday as they tackled some of the 22 scenes for the show this week. South Pacific Pictures’ Shortland Street publicist Rachel Keereweer took Cook Islands News on a bit of a tour of the set for one […]

Aitutaki promotion could bring over 500

Saturday 28 March: A $50,000 initiative by CI Tourism to promote Aitutaki and get 500 extra people on the island from March to June is working so well that it is likely to bring many more visitors. Island Hopper’s Stephen Doherty addressed yesterday’s meeting between the Aitutaki tourism industry and tourism minister Wilkie Rasmussen, saying […]

Northern islands back on line

Wednesday 1: Four northern islands were unable to receive or make phone calls on Monday. In a media statement released yesterday, Telecom Cook Islands says the problem occurred during the changeover from the NSS-5 satellite to the new NSS-9 satellite that took place on Monday afternoon. “Unfortunately with the islands of Pukapuka, Nassau, Palmerston and […]

Queen's all for it

Friday 27 March: Manarangi Tutai Ariki says she is all for Sunday flights to Aitutaki continuing, without the need for a referendum. Queen Manarangi, as she is known, is an ex-officio member of the island council and the woman who runs Gina’s Garden Lodges and Gina’s Akaiami Beach Lodge. She expressed her views at the […]

Wednesday 1: The petition to the high court for the wind-up of Aitutaki MP and associate finance minister Terepai Maoate Jnr’s business Maina Traders is set to be withdrawn following payment of the amount owing to one of its creditors. The petition was filed by Raro Aircon Ltd on March 19 and was due to […]

Friday 27 March: Aitutaki DemocraticParty executives who met with minister Wilkie Rasmussen welcomed his friendly approach yesterday. The minister, who is also the deputy leader of the Democratic Party, met with the executives who have been raising concerns about Sunday flights. Some of them are also proudly protesting the flights eight months from when they […]

Wednesday 1: The Opposition Cook Islands Party has released its position on the new $50 million China loan and says government has been reactive instead of proactive in addressing infrastructure needs. Opposition spokesperson for finance and economics Norman George says while the CIP agrees in principle that the loan be spent on road and water […]

Friday 27 March: The Cook Islands bank named in money laundering investigations is connected to a New Zealand company seeking a listing on the New Zealand Stock Exchange. The National Business Review in New Zealand this week reports that developments in the Cook Islands will have a bearing on the stock exchange listing. WSBC Bank, […]

It's all good at La Bon Vivant

Tuesday 31: As its name suggests, La Bon Vivant is providing all the “good things in life” under one roof. The newly opened Deli Foods store in Avarua is offering the same fresh product and high quality food and wine that has become synonymous with their parent company in Muri. Store manager Tim Tierney says […]

Thursday 26: Cabinet minister Wilkie Rasmussen will begin two days of meetings in Aitutaki today on the subject of Sunday flights. On arrival at about 9am this morning, Rasmussen will be welcomed by the island council. He will meet with the council at their chambers at 10.30am before meeting with the Aitutaki Democratic Party executive […]

Tuesday 31: Whoever wins on Friday night will not only be handed the illustrious title of Miss Cook Islands, but will also take home a brand new motorcycle. The Motor Centre in Panama donated a red Daelim City yesterday to be given to the winner. The $3600 motorcycle joins the growing booty of prizes which […]

Thursday 26: Emails are doing the rounds in search of answers to questions relating to recent shipping problems being experienced by some of the country’s importers. Importer John Scott has put forward 36 questions to the transport ministry which issues shipping licences. His questions range from the structure of the entities currently running the service […]

Tuesday 31: Financial secretary Sholan Ivaiti says government is still looking into how the proposed $3 million stimulus package for small businesses will be spent. Last week tourism minister Wilkie Rasmussen announced that government is now looking at scrapping the original plan and putting the funds directly into tourism. Ivaiti says from discussions with finance […]

Tuesday 31: New Zealand reality television show Celebrity Treasure Island is set to shoot its next season’s show in Aitutaki this May. Tourism minister Wilkie Rasmussen addressed the Aitutaki island council on Thursday, saying that this is just one of the events the island should benefit from this year. He told the council that tourism […]

Raro switches off and saves

Tuesday 31: Rarotonga residents did take note and ‘switch off’ during Saturday night’s Earth Hour. Te Aponga Uira’s Elma Marurai says that power station staff monitored loadings from between 8.30pm and 9.30pm, and they noted some drops in the feeders. With people being asked to switch their lights off at that time, TAU was hoping […]

Tuesday 31: National debt seems bound to grow. In meeting with the Democratic Party executive in Aitutaki last week, minister Wilkie Rasmussen revealed that government has been told that by 2014 the country will be in over $100 million in debt – in part due to the new $50 million soft loan from China. Rasmussen […]

Wednesday 1: Paerangi Mataiapo Moetaua Boaza and Puki Mataiapo Paiere Mokoroa are back in Atiu, after attending the 5th World Water Forum in Turkey late last month. The pair were overwhelmed by the forum which was attended by 12,000 people in Istanbul, and say that attitudes shown towards water by other indigenous people around the […]