‘With sincere love and Jesus you go’ 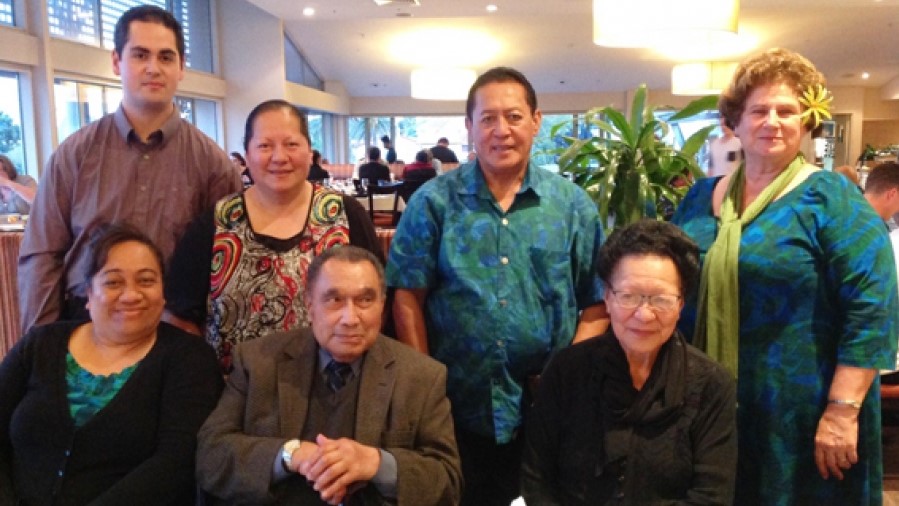 Diocesan Bishop Tutai and Mother Patricia Ann Pere, who is also known as Mama Pere, have fare-welled two of their beloved missionary warriors this week.

The pair arrived in New Zealand from Tahiti via Los Angeles on Saturday, after sending off Suffragan Bishop Aukino Tauraaa in Tahiti on Monday, March 7.

This was followed by the burial and service of Pastor and District Elder Vaevae Ruaporo in Auckland, New Zealand, on March 15.

Speaking to Cook Islands News, Tutai along with Pere described both men as 'better than life’ adding that they were both a ‘shining light’ when appearing before others.

"Because your love is better than life, my lips will glorify you, Psalm 63:3,” they said.

“Let your light shine before others, that they may see your good deeds, and glorify your Father in heaven, Matthew 5:16.”

According to Tutai, the late Suffragan Bishop Aukino Tauraaa who was a ‘missionary warrior’ left his business as a building contractor, purchased his home, and personally established the Jesus Pearl of Great Price Apostolic Church located in Sydney, Australia.

He then took up the challenge of working as a missionary in Tahiti in 2015, where he learned to speak the local language fluently, with little French.

Shortly after this, he was then joined by his wife’s mother Tepu Tauraa in 2016, who also held dual Australian and French citizenship passports.

Tutai adds that within seven years he had established nine local churches in the area of Paea, along with two churches in Papara, Vairao, Fa'aa, Maina, and Papeete. Which was followed shortly by three more churches established in Bora-Bora, Rurutu, and France.

He shares that apparently, after having spoken together, the newly ordained widow and pastor introduced him to a young couple who were husband and wife and that the late pastor Tauraa had already assigned them to missionary work in Rimatara with saints there waiting for their arrival.

“Suffragan Bishop Aukino has left his footprint, (and is) one of the greatest missionaries that our beloved SPDC and PAW has ever produced, said Bishop Tutai.

“As his Diocesan, I have always described the power of his work as that of a spiritual tsunami - affecting and impacting the whole of French Polynesia in its wake.

“But watch what his widowed newly ordained pastor Tepu Porio Tauraa has already done, she has already baptized 12 new adults, adding to the body of Christ from the day we buried her dear husband.”

Tutai reflects that District Elder Vaevae Ruaporo was also another great missionary, adding that together with his brother Amaru Ngatuakana Ruaporo, both were called the 'sons of thunder’ or the ‘nga tamariki a te mangungu' during the start of their pastoral works by the late Bishop Theophilus A.E. Price.

He reveals that the second son (referring to Amaru Ngatuakana Ruaporo) sadly and unfortunately detoured and fell out of his spiritual race, but that his brother Vaevae Ruaporo "...kept fighting his good fight in Jesus, finished his race remarkably and kept his faith to the very end - 2 Timothy 4:7.”

He went on to say that the most amazing and extraordinary thing about Ruaporo was that he did not give up his job and business as a professional painter, handyman, and restructuring contractor. Reflecting that he was like the apostle Paul - in that he self-funded and self-supported the SPDC - with whatever urgent financial needs.

“Who on all his three to four missionary journeys, never parted from his skill as a tentmaker, animal skins, and leather maker- self-funding his own missionary calling in Jesus,” he says.

Tutai explains that upon knowing of his terminal and incurable infection in his liver, Ruaporo closed their joint kiwi saver account, applied for his insurance investment to be passed on to his wife at his passing, sold his fishing boat, caravan, trailers, six cars that he and wife had always kept, and spared for traveling pastors in need of transport and room to stay.

He adds that he also accommodated many students for study along with their families to start off a new life in New Zealand, and paid all his bills, burial costs, and catering after his burial, meeting his savior Jesus Christ in glory absolutely debt-free.

“(He owned) his own home in Mangere, Auckland, and bought two houses in Tauranga where he started his mission work, he says.

“(And) bought three units in Tokoroa to whom he later mortgaged one to our current lady missionary still in American Samoa, Pastor Mehau Pate Samuel Strickland.

“Thus fulfilling Romans 13:8, which is to “owe no man anything, but to love one another; for he that loves another hath fulfilled the law".

He ends by saying that both the Suffragan Bishop Tauraa and District Elder Ruaporo have graduated to glory, saying they have fulfilled Hebrew 11:2 which speaks about great heroes and heroines of the bible.