Well-know community figure was woman of many hats 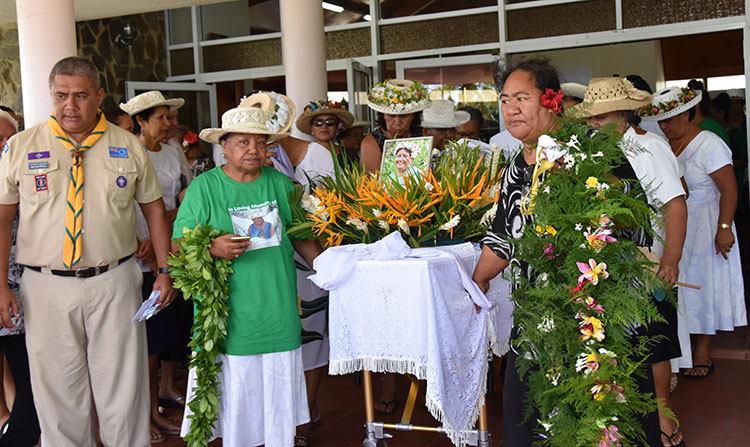 Henrica Ngamarama Wilson-Marona’s casket is escorted from the Requiem Mass at the St Joseph’s Cathedral. One of her sons John Paul stands at the left. MELINA ETCHES/21021018.

A popular and well-known woman in the community, Mama Henrica sadly passed away on Sunday at her home in Rangiura, Nikao, aged 73.

She was the beloved wife of the late Murray Wilson and Pare Marona, treasured mother of Manongi, her late son Lawrence, Tuakana, Julie and John Paul.

Tauranga Vananga Ministry of Culture acknowledged her contribution towards the Cook Islands cultural identity and performing arts, more importantly the promotion, preservation and strengthening of our language – to tatou reo Maori, said Secretary of Culture Anthony Turua at a special family service held at the Auditorium Domes on Tuesday evening.

Turua was inspired and comforted by some of the speakers in the past few days who shared their knowledge of Mama Henrica – “a great woman who was a grandmother, mother, aunty, teacher, community supporter, composer, choreographer, politician, artist, manager, sports woman, traditional leader, strong Christian and more so a loving family woman”.

In the early 2000s, she was a member of the Oire Nikao Performing Arts Cultural Group under the leadership of Raemaki Karati, Papatua, George George and many local artists.

She had a wealth of experience in judging for Te Maeva Nui competitions for many years and shared her knowledge to the judging panel - especially her advice and recommendations in the “ute” section.

The last event she judged on was the Mire Atu in December with Piritau Nga and Tuaine Teiti.

Turua said: “She always paid a lot of attention to the lyrics of the song and their meaning.”

In the mid-1980s, Mama Henrica became a teacher and principal at St Joseph and later the first female principal of Nukutere College.

In the early 2000s, she worked at the Ministry of Education (MOE) in the Reo Maori division and was one of the long serving Reo Maori advisors who travelled to all the Pa Enua with Mama Moetaua to train the primary and secondary teachers in the delivery of the Reo Maori curriculum.

Mama Henrica was a member on the Reo Maori Committee 2001 – 2003 that drafted the first Reo Maori Legislation. She was very persistent with this Bill and was always pushing for its enactment. It was passed in Parliament in 2003.

In 2016, there was a significant increase in translation needs and the increase of foreign words to be translated into Cook Island Maori words. She stepped up to be part of the committee, together with the current chair George Paniani. Since 2016 to date, the Kopapa Reo Maori have developed and gazzetted through Parliament, over 1000 new Cook Islands Maori words.

Turua said: “She was very particular about the neatness of the weaving and based the competition on this factor and not speed.”

In sports, Mama Henrica represented the Cook Islands in lawn bowls at the Commonwealth Games in 1994, and the World Bowls in 1996 as a manager. She was recently appointed the vice president of Cook Islands Bowls.

A strong Catholic through her alignment with the Catholic Church, she supported Christianity in the Cook Islands in all denominations.

She represented the country overseas (Brazil and New York) at the World Prayer Day Committee promoting our faith and trust in God.

Mama Henrica was also involved in social sectors in the community from the youth, women’s groups such as the National Council of Women, other non-governmental organisations and the Pa Metua.

She was laid to rest at Panama Catholic Cemetery. Rest in Peace Mama Henrica.