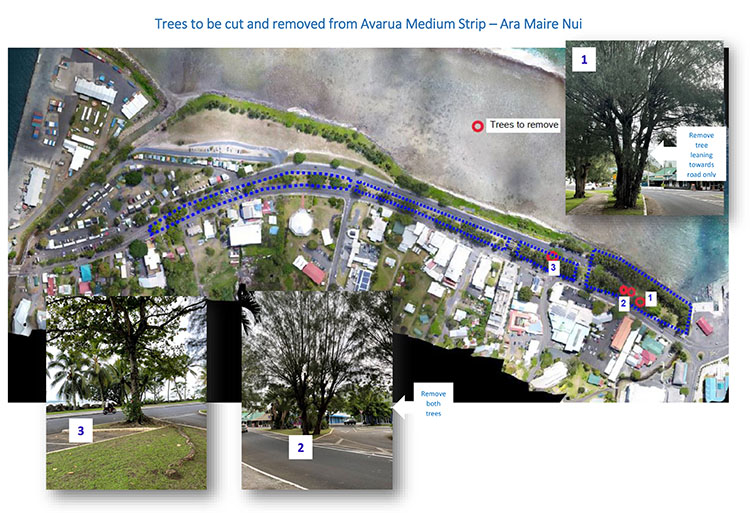 Concerns have been raised over lack of public consultation on government’s decision to remove indigenous trees from Avarua township.

Four trees will be removed from the Avarua Township median strip in the coming weeks.

Cook Islands Investment Corporation (CIIC) says it has become necessary to remove a number of trees from the area “in the interests of safety”.

The trees required to be removed are – a kauariki (tropical almond) tree and three toa (ironwood) trees.

A government spokesperson said formal consultation process was not required for the removal of these trees.

However, the spokesperson said talks were held with Internal Affairs and Tourism, adding the trees should not have been planted there in the first place.

The first tree planned for removal is one of a close-standing group of trees located on the grass verge near where the eastbound lane of Te Ara Maire Nui meets back up with the westbound lane across from the ANZ bank. It is only the tree leaning towards the road that will be removed.

The Corporation says this area was the site of a fatal accident some years ago and there have been several reports of near misses, including one case in which an eastbound vehicle’s side mirror was damaged after it was forced to swerve towards the edge of the road and made contact with the tree.

The second and third trees to be removed are located on the other side of the eastbound lane from the first tree, within the triangular grass verge opposite the ANZ bank. Both trees are leaning outwards towards the road and are in danger of falling at some point in the future, the Corporation said.

“The fourth tree, the kauariki, obstructs drivers’ views of the road at the eastbound intersection across from the Energy Centre. In addition to the traffic hazard this causes, the tree’s shallow root system is above ground in places and there are signs of roots beginning to lift the road and parking asphalt.”

“Now CIIC has joined in – there was no community consultation done before the decision was one-sidedly made by CIIC to cut down the trees,” Titikaveka MP Napa said.

“Were there any other solutions sought beforehand – such as installing signs for people to slow down. You drive carefully and within the speed limit and the chances of crashing into a tree are very slim.”

Napa says she’s disappointed that the community weren’t consulted about this. “The National Environment Service has to get involved and do something. But sadly, no government agency is going to take any notice of anything that the Opposition or anyone else for the matter says to condemn this current tree felling trend or suggest another approach to save the trees of this island.

“The irony is, off our government officials go every year to the environment meetings, all the major climate change meetings and what do we implement at home? A major tree felling programme that’s initiated and supported by the government.”

Napa said there should be a new rule for everyone to observe – “if we cut down a tree because there is no other alternative and it poses a danger, then we must plant five new trees for each tree that’s been destroyed”.

“Is CIIC going to replant new trees to replace the ones they are cutting down? Did they even think that this should be done?”

Allan Jensen said: “In time, and once suitable public land has been identified, CIIC intends to plant more trees that will provide shade and enjoyment for the public in years to come.”

These removals will take place over the coming week with work occurring outside of peak traffic hours in the early morning or late evening. Minimal disruption is expected.