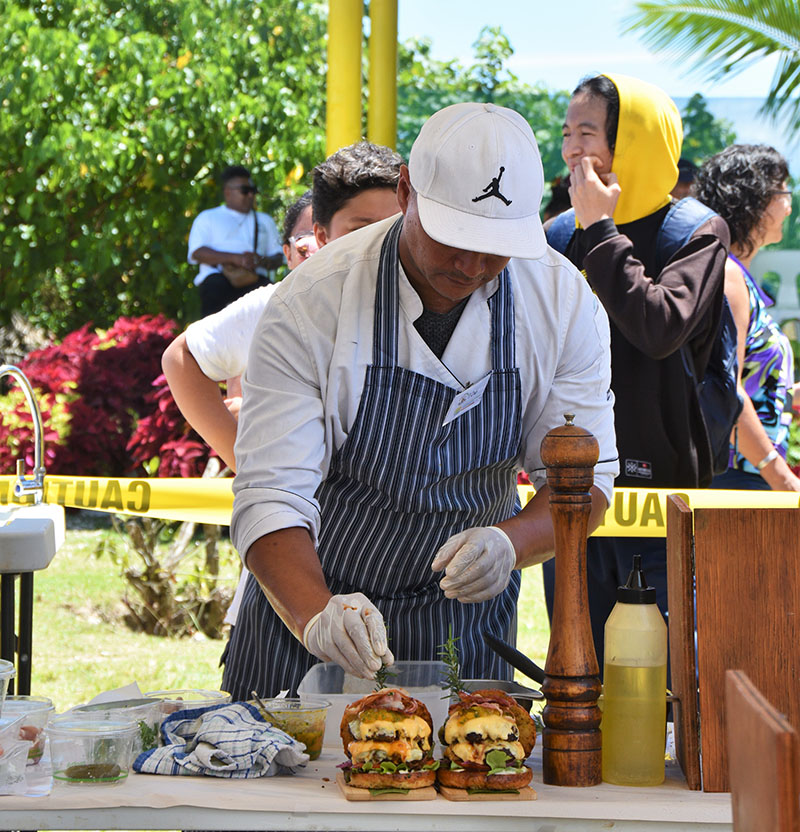 A great hoard of people flocked to the Terevete Park yesterday to celebrate World Food Day, a global event celebrated yearly where food lovers as well as growers, chefs, and many more can come together to share and enjoy good food together.

Fresh produce, cooked foods, agricultural machinery, floriculture, seafood, and more were among some of the attractions available on the day.

The Potiki Makona Kai Competition (the children’s cooking competition) hosted by the Cook Islands Chefs Association as well as the Rarotonga Burger competition, floriculture displays, craft sales, live entertainment, and bouncy castles were also on site for the little ones.

The park was flooded with people either looking for a tasty lunch or fresh produce to stock their fridges with. This made for a highly successful day for sellers.

June Hosking was among the sellers. She and her sister had brought her business over from Mauke and were busy selling their jars of jam, chutney, jellies, and sauces at yesterday’s World Food Day.

Hosking had over 30 products available for purchase. She explained that the name ‘Mauke Moments’ came from her husband Andrew’s experience of the time he tasted a cracker with a tasty spread on it and thought to himself ‘Wow, what a moment’. They decided that was what they would name their business.

Although she and her husband live a humble lifestyle back on Mauke, they have been able to hand make everything in their business from their chutneys and recipes to their idea for sustainably made souvenir pouches visitors can purchase at the airport to slot their jars into and take on the plane or wrap as presents for loved ones.

Hosking said she always enjoys her time when she visits Rarotonga and looked forward to sharing her products with customers for the rest of the day.

He reported that many people turned up even before 8am. “World Food Day is a global event that we celebrate every year bringing together all the farmers, the ladies with their flowers and plants, people with good food, fishermen and the general public to come together to network with each other,” Maao said.

It was highly noticeable that much of the food present and available was mainly freshly grown, healthy produce and vegetables.

“It’s great to see that much of the food here today is healthy food because NCD’s (non-communicable disease) is actually one of the biggest issues around. When we were planning the event, one of the main concerns was hoping to have as much healthy food as we could on the site. It’s great to have healthy options,” Maao said.

Ovaia Liew, one of the head supervising chefs from the Cook Islands Chefs Association, said that this year’s Potiki Makona Kai Competition was more of a workshop.

Liew said it was a successful day where the kids were able to learn new food groups, and practice their literacy and numeracy skills through reading recipes together and taking measurements through each of the recipes they constructed.

Twelve-year-old Rocklyn Taokia was the youngest participant in the Rarotonga Burger Competition and shared that he entered the contest with his ‘BTY - Better than Yours’ burger, made up of 75 grams of beef and pork, with many spices and a pawpaw salsa.

Looking around the first two participants who had just begun constructing their own burgers, Taokia said that he had some good competition but that he was hoping to win. “Cooking is my talent and I enjoy it,” he said. A little one was able to successfully beat the heat, enjoying the music coming from the stage. 21101530 Sharlyn Peconcillo and Giselle Ocfemia beat the heat with refreshing fruit smoothie from one of the stalls at World Food Day yesterday. 21101521