Business and professional women use rehab theme to highlight vulnerability 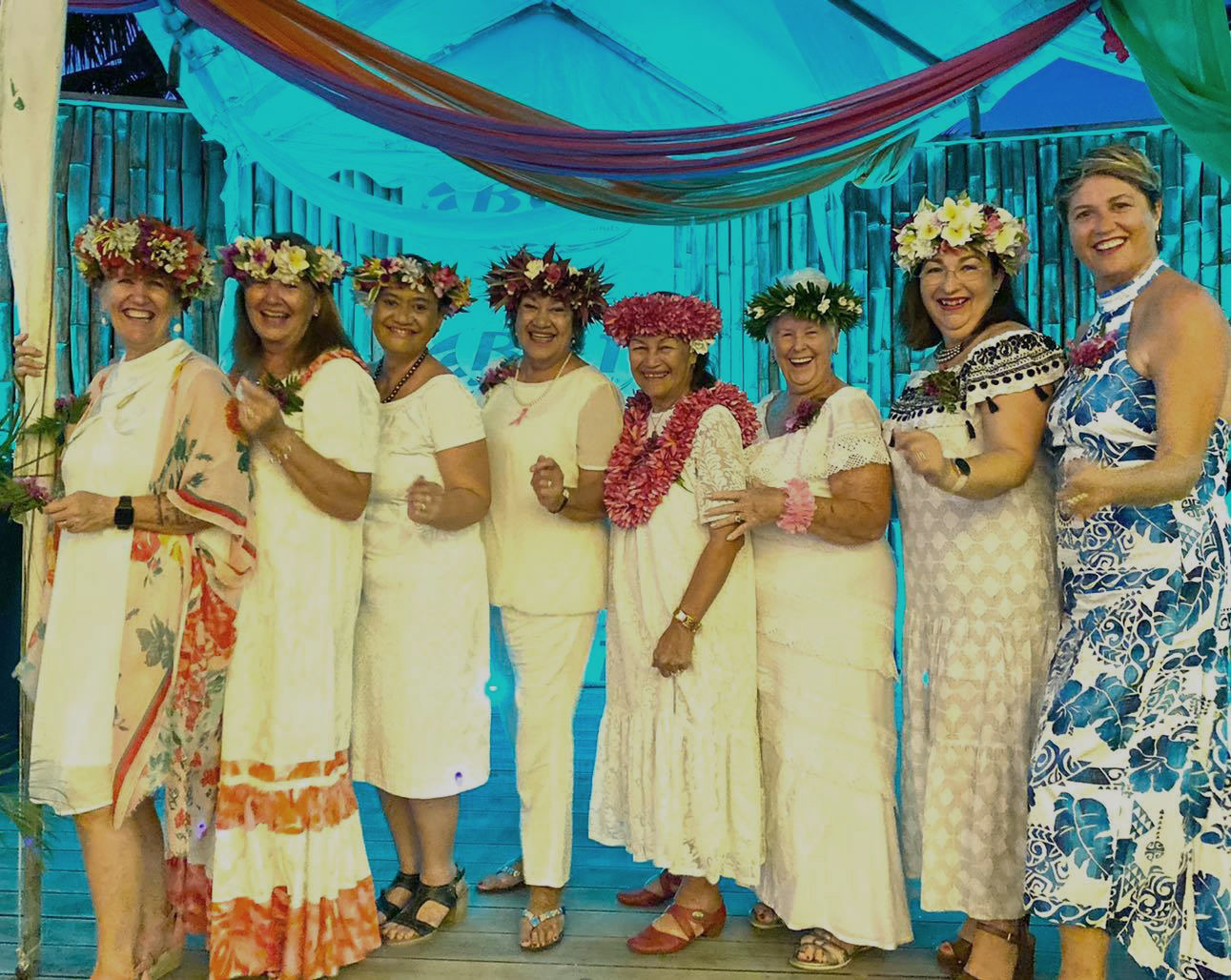 An organisation which works to support women and children who experience family violence is $5000 better off thanks to the fundraising efforts of a group of female professionals.

The group presented PTI with a cheque for $5000 to support their work at a Friday night function, held at Rehab on Rarotonga.

The theme of ‘I Am Not Your Rehab’ was about “providing support to grow strong families, of which women are central”.

CIBPW is an organisation for working women of the Cook Islands and prides itself on “networking, development and leadership in action”.

Its executive is made up of women in a variety of fields in the Cook Islands.

About 100 people turned out “representing all walks of society, both men and women”.

President Doctor Debi Futter-Puati, in delivering her speech to the gathering, said while celebrating 30 years as an organisation, it seemed “somewhat frivolous given the current financial climate” to just have a birthday party.

“In this light the executive decided to use this celebration to support an organisation that is so important to the community and who constantly struggles for survival.

“PTI are a fellow NGO who have, since 1994, supported women and children when they are most vulnerable.

“In fact, some of you may be unaware that Dr Takiora Ingram and other founding members of Cook Islands Business and Professional Women Association (BPW) assisted in the forming of PTI due to the concerning level of violence in the community.

“And so, the connect between our two organisations has a long history.”

Punanga Tauturu Inc co-ordinator Rebekah Buchanan said: “The event was extremely well done, with the theme of ‘I Am Not Your Rehab’ that was modified from the New Zealand movement ‘She Is Not Your Rehab’, to create more awareness about domestic violence.”

“We are very thankful to BPW for their generous effort and selecting Punanga Tauturu as the beneficiary this year.”

Futter-Puati said BPW had, at its foundation, always been concerned with supporting women’s health, equality and of course women’s rights.

“While some of these have improved for women in the Kuki Airani, it is sad to say that 30 years later, there is still much to do to improve, in particular, equity and health.

“Particularly as women and children continue to be unsafe in our community.” A 2014 Te Ata O Te Ngakau: Shadows of the Heart study by Te Marae Ora Ministry of Health and the National Council of Women provided evidence that more than 80 per cent of Cook Islands women experience family violence, she said.

“We suspect at this time, the statistics will be even higher given the stress many are under due to Covid-19.

“The impact of this violence is represented in the state of both women’s and children’s pito’enua or wellbeing.

“Every week we see the evidence of these acts in our community when reading the newspaper, and very little progress has been made in rehabilitating the community from violence.

“And so, for these reasons we decided to use the theme of ‘I Am Not Your Rehab’ for this event.”

Futter-Puati said some people had some difficulty understanding why CIBPW was using the theme and venue.

Using Rehab Nightclub as a venue was a play on the theme of ‘I Am Not Your Rehab’ which had been adapted from the ‘She Is Not Your Rehab’ movement in New Zealand, she explained.

“We know in the Cooks that some men are also the victims of domestic violence also (albeit far fewer than women), so we modified the name to ‘I Am Not Your Rehab’ and decided to use Rehab Nightclub as we want everyone to ‘check into rehab’.

“Most people will, during their lifetimes, need some kind support to rehabilitate.

“The numbers are pretty staggering, one in three people actually.

“There should be no stigma or shame attached to seeking support or rehab so please check into rehab with us all,” she told those gathered.

“We also know is that this area has been the site of some alcohol infused violence.

“We wanted to be in this space and use it peacefully, challenging the status quo and asking Rehab to designed a signature I Am Not Your Rehab mocktail for the evening to encourage people celebrating to have a beautiful non-alcoholic option, to encourage responsible hosts, sober drivers, and respectful celebrations.”

Futter-Puati said the organisation also thought it was a good idea to move out of its comfort zone.

“And besides, I can finally say I spent a night out at Rehab to my own kids.”

Futter-Puati thanked a number of past presidents in attendance.

“Thank you for leading the way and serving the community alongside your executive members.”

She concluded by thanking the current executive for planning this gala.

BPW patron Helen Henry presented the Patron’s Award, which was instigated in 2011. The selection of the honour is by the patron and the award does not have the endorsement of the executive.

It had only been given three times previously to the late Te Tika Mataiapo Dorice Reid, Jolene Bosanquet Heays and Pai Chambers.

“This year, 2021, it is once again time to present the award to a stalwart member who has made a significant contribution to the work of BPW over many years and continues to do so,” Henry said.

“A woman who constantly demonstrates, strong leadership skills, enthusiasm and dedication to all the organisations she belongs to.

“She does not seek publicity or acknowledgement of her efforts.

“In fact many of you may not know of her extensive work in the community.

“She is a successful entrepreneur working in the retail sector and also involved in the inbound tourism and accommodation sectors of Rarotonga.”

Henry then presented the award to Dawn Baudinet, a former president who held the position for two terms.

- By Al Williams and Melina Etches.