Aspiring chefs cook up a storm 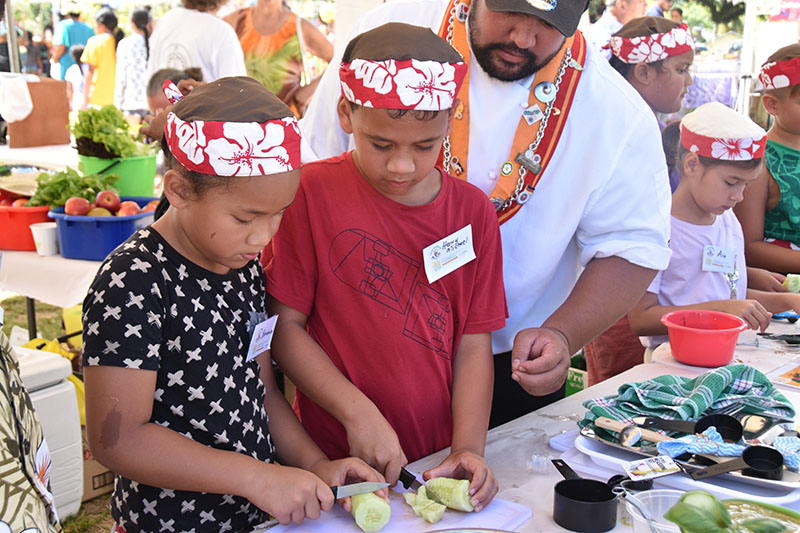 Beniamina Tuteru and Henry Michael William preparing a recipe under the guidance of one of the Cook Islands Chef Association mentors. 21101524

The kids, despite the heat, were eager to put on their chef’s hats and aprons and work together to construct different recipes to enhance their cooking skills and to share samples with other members of the community.

A ‘seaweed salad’, similar to a poke bowl, creative mocktails, and ‘apple pizza’, made up of apple slices, crumbled cookies and nutella on top were just some of the recipes that the children brought to life.

The event was run also in 2018 and 2019 and was held as a competition, with chef mentors from the industry helping young student ambassadors.

The participants were split into teams and were judged by public vote on the recipes attempted.

This year’s event was more of a workshop than just a competition.

Ovaia Liew, one of the head supervising chefs of the Cook Islands Chefs Association, said: “The aim was to see the kids learning to make some really good foods that they can replicate once again back home.”

The kids were able to learn new food groups, and practice their literacy and numeracy skills through reading recipes together and taking measurements through each of the recipes they constructed.

Ten-year-old Ikitia Daniel was one of the participants and said that he enjoyed the workshop yesterday.

Although some of the recipes were slightly difficult at parts, Daniel said he had a fun day. Maya Szekely concentrates on her task of peeling a cucumber. 21101523 Teaka Pauka looking very focused on the meal he is about to prepare. 21101522