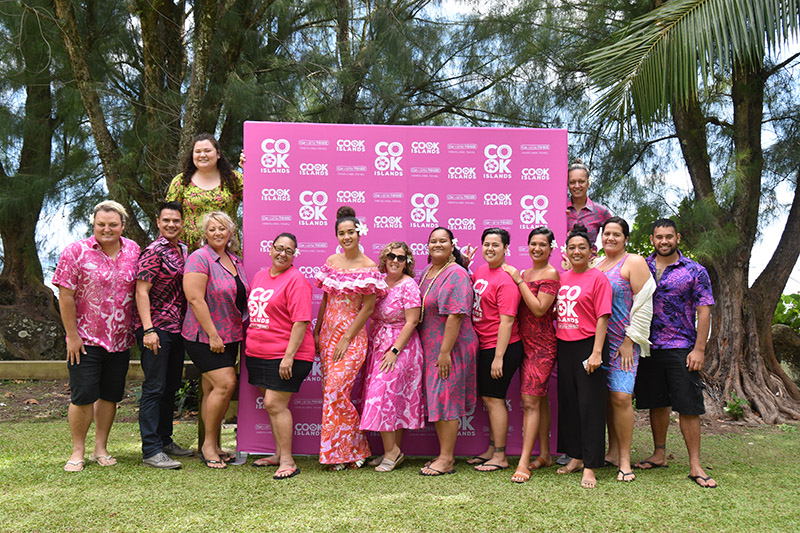 A breast cancer survivor says one has to try and stay positive after receiving the diagnosis and in their journey to fight the cancer.

Barbara Lawson, the guest speaker at a fundraising evening organised by the Rotary Club of Rarotonga to raise awareness for breast cancer, said: “A lot of people when they hear they have cancer turn their head to the wall and feel like it’s a death sentence. You can get through these things, you have to stay positive,” she said.

The evening with friends dressed in pink was held at the home of Jaewynn McKay from Cook Islands Breast Cancer Awareness, and hosted by Coastal Kitchen last week.

The night began with Stephen Lyon, the president of the Rotary Club, introducing the Rotary team and explained the club’s history, goals, and accomplishments.

“Rotary is pleased to be able to support CIBCF,” he said. ”October is Breast Cancer Awareness Month and we put this event on to fundraise for the cause.”

The club was pleased to donate $1400 to CIBCF by the end of the night. Half of this amount was accumulated through ticket sales and the other half through Rotary’s own efforts.

Lyon shared that they had planned the event to host 60 people but ended up with 70.

“It was great to have a full turnout. Everyone seemed really engaged and in good spirits.” He thanked Barbara Lawson, Lawson’s Dry Hills, and CITC for providing the wine for the wine tasting.

Guest speaker and breast cancer survivor Barbara Lawson was one of the highlights of the night.

Lawson, the founder of Lawson’s Dry Hills winery, was able to share and speak on her experience with breast cancer as well as take everyone who attended on a wine tasting journey.

She spoke about her entire journey with breast cancer, highlighting how great it was for survivors like herself to be able to talk about it now.

Dawn Baudinet, president of CIBCF thanked everyone, especially Rotary, for their huge generosity and for coming out to support such a powerful cause.

She deemed the night a great success as it was well organised, adding it was so good to see so many guests – both men and women – wearing pink.

Baudinet extended an extra thank you to Lawson for so courageously standing up to share her story with so many people.

“It’s not easy being a breast cancer survivor or talking about it with anyone. Today it is not a taboo subject, it took us a long time to get to where we are but it’s great we are here today,” she said.

“The Cook Islands Breast Cancer Foundation was very proud to be part of such a wonderful fundraising event and the recipient of such a generous donation from the Rotary Club of Rarotonga, we cannot thank them enough,” Baudinet said. “The guests, music, guest speaker and Tony Bullivant and his grazing table were superbly executed. I have had very good feedback from the evening and am sure everyone at this event had a wonderful time. We thank the Rotary Team and all those who contributed to this amazing evening.”