Rise and Shine graduates reach for the stars 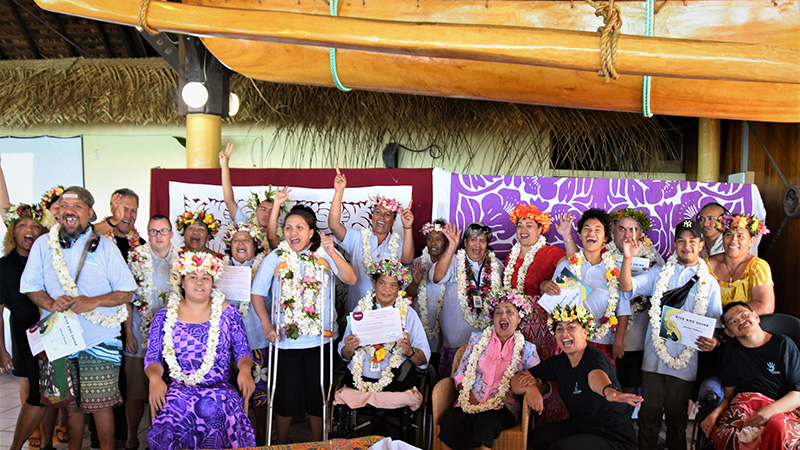 The Rise and Shine and Jigsaw graduates with their supporters, families and friends. 21112310.

Fourteen clients were presented with graduation certificates of the landmark pilot project aimed at preparing and supporting people with disabilities to enter safely and confidently into the workforce.

“To have a job is a basic human right because work gives you so many things, it brings you joy, friends, connections, and brings you a purpose,” says Ministry of Internal Affairs secretary Anne Herman.

Herman made these comments in her address at the double graduation ceremony of the Disability Employment Pathway pilot project ‘Rise and Shine’ and the Australian government-funded programme ‘Fighting Chance’ that was held on Tuesday at The Rarotongan Beach Resort & Lagoonarium.

“We want to give people with disabilities equal opportunities to work, to love, to raise families and do anything their heart desires,” said Herman, who also acknowledged the support of UNESCO, the Creative Centre, Internal Affairs and those who were involved in the delivery of the first time programme.

Fourteen clients were presented with graduation certificates of the landmark pilot project, and Herman said: “you are the class of 2021, you have broken barriers and you have created a new path for persons with disabilities who come after you”.

The Rise and Shine pilot project disability coordinator Caroline Tixier said: “This is an initiative to help Cook Islands people who live every day with a disability.”

“We started with the basics, Cook Islands people with a disability are often marginalised and excluded from economic and social opportunities.”

Tixier noted that the country’s 2016 census indicated that 24 percent of the population over the age of 10 had a form of a physical disability.

“This indicates that there is a high number of disabilities here, therefore there is a strong need for greater participation and inclusion and this is their opportunity to get work.”

Participants in the 20-week programme had a common message, “they want the same things that we want, they want the opportunities to work, they want to included and they are proud,” Tixier added.

Kautai said: “I’ve never done something like this, and I’m looking to doing more like this for my future instead of just sitting there like I’m locked down in jail.”

Born in the Cook Islands, Kautai had started working at the age of 12, later he moved to Australia where he had been offered work. “It was the worst job in my life, I got beaten up at work and so I decided to return home.”

Back on Rarotonga, he worked as a labourer, a job he loved. “But somehow I got a bit big-headed with too much money in my hands and I got too excited, got into a motorbike accident that put me in a coma for eight months, but here I am still alive today,” said Kautai.

Kautai had never known of the Creative Centre until he became a client, and credits Caroline Tixier for steering the Rise and Shine project.

“That’s the only thing I’m really enjoying, and would like to give a big thank you to everyone here… and it won’t stop here,” he said.

Four years ago, Jessie suffered a stroke. “It was very scary because I couldn’t do anything.

She believes her faith in God “has given me the opportunity to live my life again”.

Jessie was pleased to be given the option of undertaking the disability employment certification programme and proud of all the participants and their achievements.

Faith Matapo from the island of Mangaia also received the Rise and Shine certificate.

Family and friends, Member of Parliament Te-Hani Brown, and government stakeholders attended the unique ceremony that was held at the Rarotongan Beach Resort & Lagoonarium.