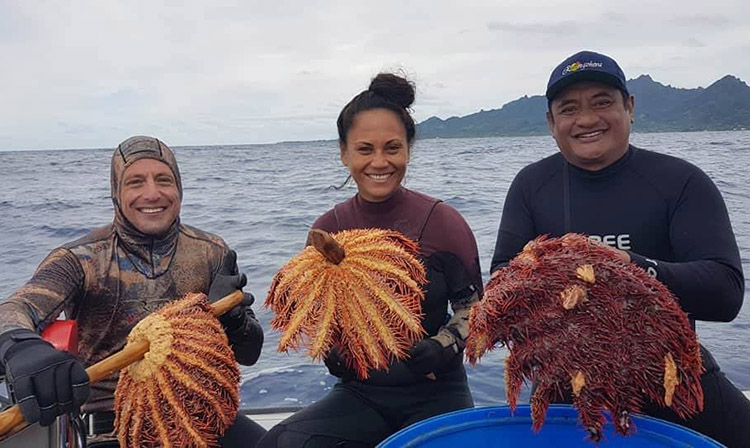 A taramea outbreak is considered human induced, not a natural disaster, says a local marine biologist.

Since the taramea (crown of thorns) was discovered on the reef floor of Rarotonga in July last year, 2800 of the coral eating sea creatures have been collected and destroyed.

Taramea is a type of starfish – in the start of their life cycle, they are herbivores that feed on plants but in their adult life, they become carnivores feeding on coral.

Collection of the taramea started last year with five divers, free diving 14 metres below to collect 50 to 100 crown of thorns per day.

Trained high school students and expert scuba divers continued to gather the creatures from a depth of 30 metres.

Dr Rongo says this operation has worked for now, “at least we have controlled the population,”. The taramea will continue to be monitored, he adds.

The operation concentrated from Avarua towards the Rarotongan Hotel, from the north to the western side – the areas that the taramea were found.

Generally, the current goes from Avarua towards the west, other sea animals like the vana (sea urchins) and the rori (sea slug) also follow this pattern, said Dr Rongo.

In Ngatangiia no taramea were found. “There is a lot of algae there but now there are no more wetlands doing their job anymore; the lagoon is the new wetland, so the lagoon filters it before it goes over the reef.”

From Ngatangiia towards Titikaveka, “has the most beautiful reef on the island, because of their lagoon that filters everything (nutrients) that flows into it”.

He believes that removing the seaweed is not a good idea as it solves the problem of the nutrients that still flow into the lagoon.

Historically the Cook Islands has had two taramea outbreaks, one in the 1970s (that started in the late 1960s) – a clean-up event that is clearly recalled by the elderly who collected the taramea from the lagoon, burning and burying them on land.

In the 1990s, the second recorded taramea eradication project which started in 1995 lasted for about five years.

Both events happened just after an El Nino event when it was dry, said Dr Rongo. “This period builds up nutrients on land, when there is a flood event, a pulse of nutrients flow into the main environment. These were associated with a drought event and also an El Nino, so there is a correlation for these outbreaks – drought then floods,” he explained.

“We are in the La Nina condition, so we tend to have a very warm and wet conditions.”

The name alone – “taramea” – means the creature is not a threatening or significant species. “Tara” means spiky or spiny and “mea” means thing.

“Just the name alone tells you it wasn’t an animal that threatened the sea life in the past so this suggests that there were never really any outbreaks back then… the taramea was not important part of our history and in our literature we are still struggling to find if whether there was a problem in the past (before the 2 two known outbreaks),” he said.

According to Dr Rongo, a taramea outbreak is considered human induced, not a natural disaster.

In normal conditions they are very low and they play an important role, they provide food for a variety of fish species and also maintain a healthy and diverse community of coral, he said.

Taramea spawn every summer and their survival is dependent on their surrounding environment.

“If the conditions are right, like the nutrients are there, that increases the chance of the probability of taramea survival.”

The taramea have natural predators on the reef, like the pu, kokiri and puffer fish and when they are not there to control the population of the taramea, “this can cause problems”, said Dr Rongo.

In the 1970s because the outbreak of the taramea reached inside the lagoon, the reef had already suffered, as it did in the 1990s.

“From the 1990s, we found that it took about 15 years for the reef to get to where it is now, but there is no guarantee it would take 15 years to recover - which is why we acted now.”