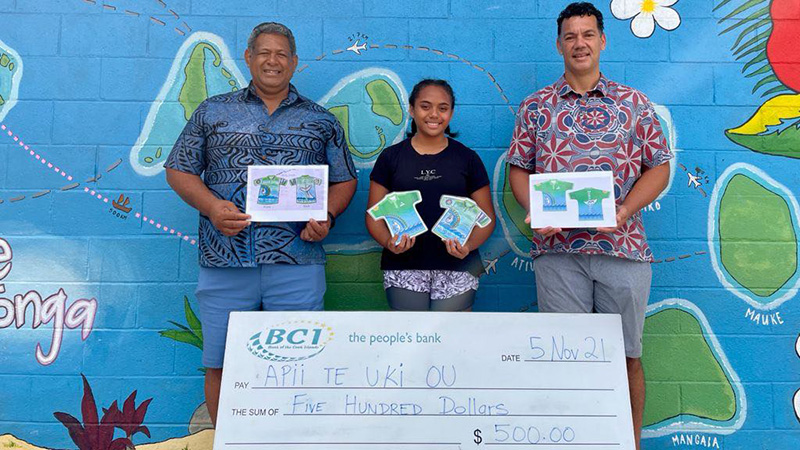 A student from Apii Te Uki Ou was this week announced the winner of the design competition for the Marae Moana uniforms.

The Marae Moana Communications Outreach team attended with the special task of announcing the winner of the design competition for the Marae Moana uniforms.

Ten students took part in the competition, coming up with designs that reflected the vision and passion that Marae Moana has for the ocean, also adding their own interpretation of what the ocean means to each of them and how significant they think its role in their own livelihoods are.

After much careful consideration and all votes being casted by the public, year nine student Te Iri Iri Henderson was named the winner, with her design being selected to now proceed to the official design process at Turtles Sportswear.

Marae Moana ambassador Kevin Iro attended the assembly alongside the rest of the outreach team, Tim and Lucile Meyer and Kora Kora, to congratulate and present to Henderson a certificate as well as $500, donated by Seacology for the school’s participation.

The money will go towards the senior school camp to Mitiaro which the students have been preparing and raising funds for throughout the year.

“The fact that there were so many awesome and inspirational designs and ideas from the students was definitely the highlight of this whole design process with the school. Anyone could have won,” Iro said.

The next steps for the Marae Moana Outreach Project will be to get the winning design physically created and put on the polo shirts which will become the official uniform for the outreach team.

Henderson will be very much part of the design process and will help in refining her design to suit the t-shirt.

“My design is based on the ocean and land, with a few birds. I used the fish hook which represents life and surrounded it with other designs of sea life and the kotaa.

She also hailed Marae Moana’s initiatives: “I love how you guys are giving us the opportunity to help with promoting your group of people who are doing so much.”