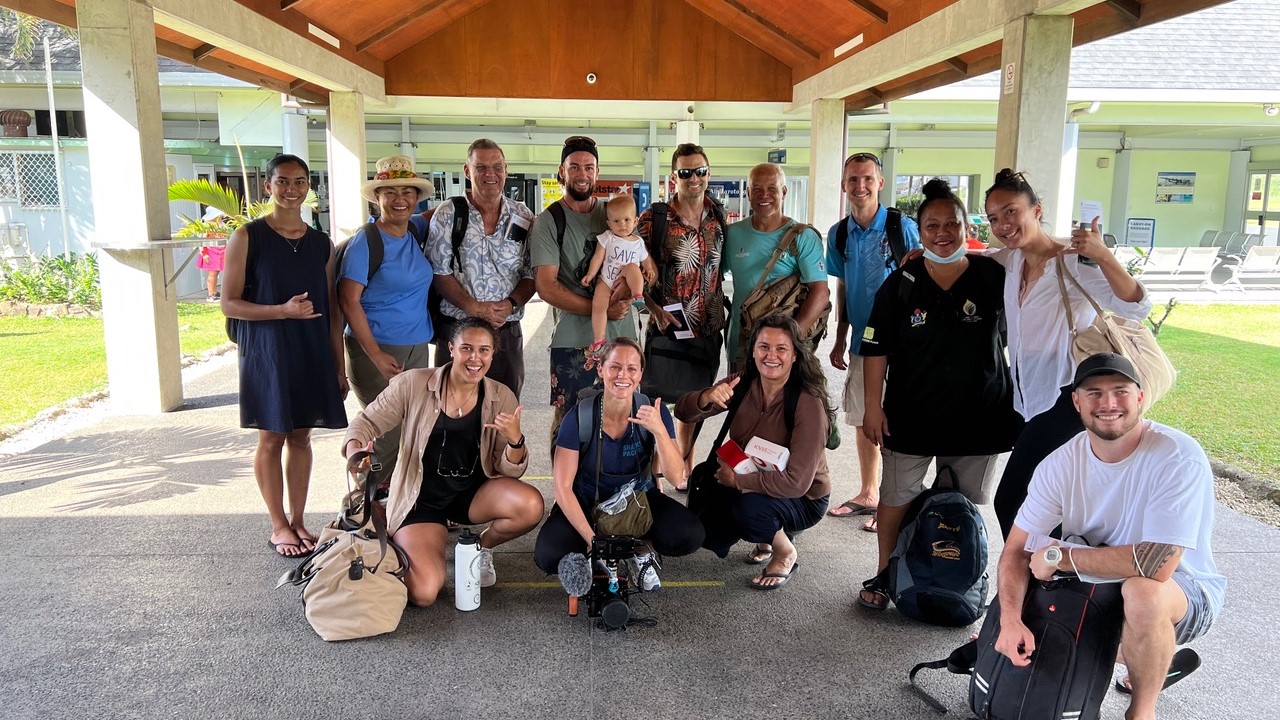 A Cook Islands-led scientific expedition is on its way to Penrhyn to carry out vital research on marine life on the remote Northern Group island.

The Expedition team is jointly-led by non-governmental organisation Sharks Pacific and the Ministry of Marine Resources (MMR), and includes Rarotonga-based NGOs Te Ipukarea Society and Moana Foundation, as well as the Cook Islands Natural Heritage Trust with the support of the National Environment Service (NES).

The local groups have teamed up with Inkfish, a Seattle, Washington, USA-based organisation that supports marine research. With three vessels currently in the region, Inkfish has generously offered their support to both Sharks Pacific and MMR for marine research that could be carried out in the Cook Islands aboard the vessels.

It was an offer that couldn’t be refused, says Sharks Pacific founder and executive director Dr. Jess Cramp, who resides in Rarotonga and has spent a decade studying sharks in the region, including Penrhyn.

“It’s very difficult to raise funds to conduct research in the Northern Group. Our team was lucky enough to spend time on Tongareva studying sharks and learning from the locals in 2018, and we’ve been trying to get back since,” Cramp says.

“When this opportunity popped up, I was thrilled to partner with MMR and other local NGOs to return to Tongareva to expand our research capabilities, but to do it with a bigger team, including young Cook Islanders with a keen interest in marine science.”

Equipped with submarines, autonomous remotely operated underwater vehicles (ROVs), and full diving facilities including hyperbaric chambers, Cramp says the vessels are ideal for the type of research that will be carried out on the northern group island.

The group’s research permit allows them to conduct biodiversity and marine resource surveys from reef flats to depths of 1000 metres, which is a particular point of excitement for those involved and only possible due to the equipment, gear, and qualified crew that have been made available by Inkfish.

Data gathered by researchers will add to a 2015 reef survey carried out by MMR, which is the only extensive resource survey that has been carried out on Penrhyn to-date. Using that baseline data, the research will also provide insights into how the island’s marine environment may have changed over time.

“Undertaking any marine monitoring and research activities in our Pa Enua is costly and logistically challenging, limiting what we can normally achieve. Tongareva’s expansive marine environment only adds to that,” says MMR Secretary Pamela Maru.

“Partnerships, like this with Inkfish, that supports Cook Islanders to get out there with the tools we need to do the science and collect the data, so we know and understand and can share with our people what’s happening in our waters, is invaluable.”

“Having MMR and local partners working together, pooling our technical expertise, means we can achieve more. It won’t just benefit the people of Tongareva but the broader Cook Islands, contributing to our marine biodiversity knowledge base and Marae Moana planning. We’ll be able to monitor any changes over time, for example changes to coral reef coverage and diversity that may be due to climate change, so that we can develop conservation and management approaches that effectively respond to any management issues.”

The island – with its famous massive, deep water lagoon – was chosen by researchers due to its unique status as having the highest density of reef sharks of any inhabited island on the planet – a discovery made by Cramp and her team during their 2018 research expedition to the island.

Cramp says an area of interest for research will be identifying critical habitat for certain species of endangered sharks, including Oceanic Whitetip Sharks, which have been observed to migrate between Rarotonga and Penrhyn.

Other areas of focus for researchers will be documenting an extensive record of Penrhyn’s biodiversity for the Cook Islands Heritage Trust and NES, as well as outreach and education efforts, including knowledge exchange with the local community.

Every member of the expedition team is either a Cook Islander or a Cook Islands resident, which is a point of pride for many taking part, including Jacqueline Evans, founder of the Moana Foundation and expedition participant.

“I’m grateful to have been invited to be part of this expedition but especially excited that some of our young Cook Islands marine science students are able to have this experience,” she says.

“There is often little opportunity for Cook Islands science graduates to practice their science in the workplace and this expedition enables that to happen.”

Penrhyn’s Island Council has given permission to the research team for this expedition, which will be required to adhere to strict guidelines and screening for Covid-19. MMR