Cooks and China in ‘people to people links’ discussions 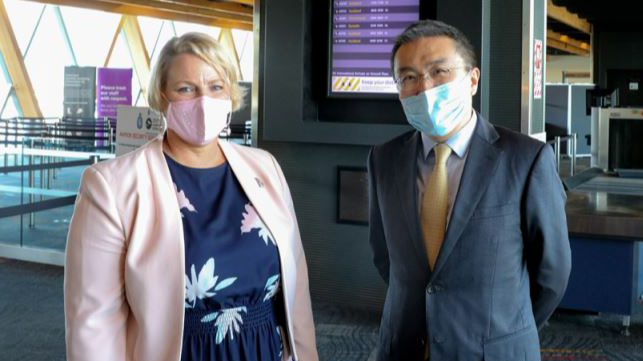 New Ambassador for the People’s Republic of China (PRC) Wang Xiaolong has been on Rarotonga for a whistle-stop visit this week to talk about future co-operation with the Cook Islands.

The visit comes in the lead up to the 25th anniversary of diplomatic relationships between the two nations.

Cook Islands Ministry of Foreign Affairs secretary Tepaeru Herrmann said both countries are expected to work closely together over the next couple of weeks to chart a forward bilateral co-operation agenda to guide joint efforts over the next three or so years, to support Cook Islands and the People’s Republic of China shared and separate development aspirations.

“We’re pleased Ambassador Wang has been able to visit so soon after the resumption of international arrivals from New Zealand and expect to hold wide-ranging discussions this week, including on forward bilateral co-operation; regional affairs and greater people to people links,” Herrmann said.

Ambassador Wang comes into the Ambassador to the Cook Islands role having previously served as Director-General of the Chinese Foreign Ministry’s Department of International Economic Affairs and has served in China’s Foreign Ministry as Special Envoy for the PRC on G20 affairs, Ambassador to Mongolia and Singapore.

Hermann said the cornerstone of People’s Republic of China and Cook Islands co-operation of the last 25 years has been a commitment to partnership, no matter size or might and an abiding respect for self-determination of one’s own development path.

“In 1997, we were economically bankrupt, confronted with an exodus of Cook Islanders and unable to raise international finance for our development aspirations.

“Those are the circumstance under which the PRC established diplomatic relations with the Cook Islands and the beginning of what has come to be a mature and valued bilateral partnership for the Cook Islands,” Hermann said.

“As we reflect on 25 years of co-operation there is much to be proud of, the grants and concessional loan facilities availed by the PRC has seen the completion of pivotal public infrastructure since, namely  the Courthouse, Police Headquarters, the Ministry of Education, the multi-sports complex in Nikao and the Apii Nikao rebuild.”

The two governments are intending to mark the 25-year anniversary in July with a program of engagements to showcase past co-operation and articulate a forward co-operation agenda.