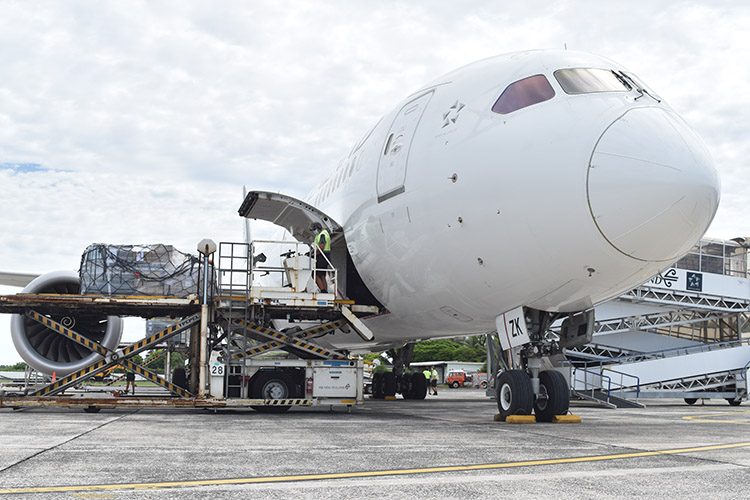 Air freight will return to normalcy once the two-way quarantine free travel starts but there are fears the May travel bubble could be too little and too late to save some businesses.

Air New Zealand is refusing to accept any new freight before its backlog is clear, says a Rarotonga businessman.

The lack of freight space has given local business owners grief for over two months – since quarantine free travel for Cook Islanders and local work permit holders began in January this year.

As part of the “one-way travel bubble” Air New Zealand’s planes downsized from the wide-bodied 787-9 Dreamliner to the much smaller Airbus 320. Despite the Airbus making two weekly trips opposed to the single Dreamliner flight, local businesses say the Airbus freight space doesn’t even come close to matching the larger plane.

Mike Pynenburg, owner of The Computer Man, said his last lot of freight arrived on March 4, when the 787-9 Dreamliner was used to clear a backlog – an initiative set up through “government-to-government conversations together with input from Air New Zealand,” according to the Cook Islands government.

Air freight is essential for Pynenburg’s business and he has been told he will get no freight until at least April 13.

Air New Zealand general manager of cargo Anna Palairet said: “We’re in discussions with the New Zealand Government around increasing cargo capacity by replacing one of our A320 services with a 787-9 service.”

An idea Pynenburg thinks is great. But the situation is tricky.

The Cook Islands is committed to having a “green crew”, a term that refers to an airline crew that flies exclusively domestic in New Zealand or to the Cook Islands. This was re-affirmed by Prime Minister Mark Brown, who is in New Zealand, on Monday during a Zoom press conference with Cook Islands media outlets.

“Currently, the only green crew that are available are those that fly on the Airbus,” said Brown. “Air New Zealand of course will be looking at what they can do to recruit the crew required on their 789’s and that’s a matter for airline economics.”

Air New Zealand’s Palairet said once the Cook Islands bubble was announced the expectation is air freight will return to normalcy.

The idea was echoed by Brown, who said on May 1, when the borders should return to normal, air freight will follow suit.

But Pynenburg says May is too far away, “at the very least we will have to let go of staff. If we’re not getting work till May we will be starting to shut down.”

However a leading business also affected by this freight issue feels it’s up to local businesses to adapt to the times. According to the Cook Islands Government, the Dreamliner was sent as a result of "government-to-government" conversations as a way to clear the freight backlog - 21033101

Gaye Whitta, the general manager of CITC, said: “Airfreight is a luxury item these days and we try to manage our orders to limit what needs to come up by air. Other businesses need to do the same during this time.”

“We all know that the flights coming up here have limited spaces so it should not be a surprise if goods are offloaded.”

Air New Zealand flights to the Cook Islands are subsidised by the New Zealand government but to what extent is vague.

The Cook Islands News asked the New Zealand high commission based in Rarotonga, Helena Cook how much flights were subsidised, Cook responded “funding for flights to Cook Islands, was commercial in confidence.”

The information Cook did share was $372 million has been allocated to support the airline's international connectivity outside of New Zealand, through the International Airfreight Capacity scheme.

The scheme put in place by the New Zealand government in March 2020.

Air New Zealand have also changed its flight schedule, instead of arriving in Rarotonga on Tuesday and Friday, they have moved to Monday and Tuesday, which will start on April 5.