A Second Chance at life for ex-inmates 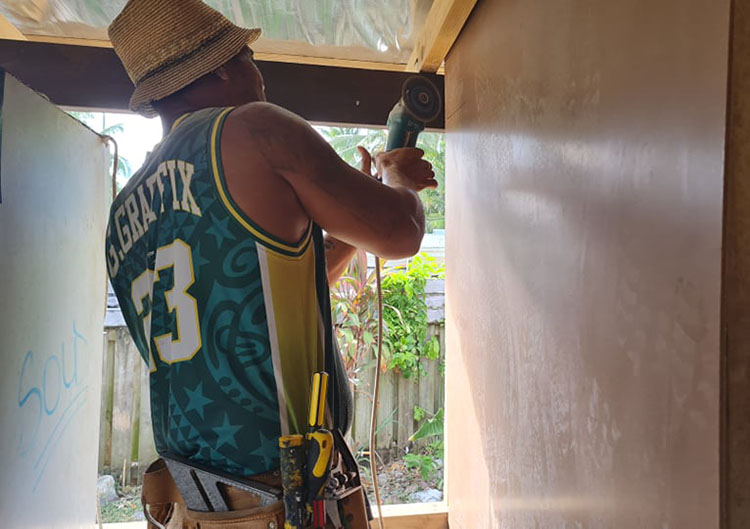 A former inmate working with local NGO Second Chance says he is pleased to be getting renovation jobs. 21021926.

Over a period of 17 years, Mr X, a repeat offender, lived eight years of his life locked up in Arorangi prison. The former inmate was released three months ago, this time around he stands determined not to reoffend and not to ever return “inside”.

He is turning over a new leaf with motivation and support from the Second Chance Support Group Inc. – a new non-governmental organisation (NGO) formed to provide support services to inmates upon their release and assist them towards rehabilitation.

Mr X says the Second Chance organisation is a blessing for repeat offenders like him who find it hard to start a new life after prison.

“Second Chance is not just good – it’s perfect,” he says.

Every time he was released, Mr X was subjected to the stigma of being a “prisoner” and the topic of blatant demeaning conversations.

“For a guy like me who has been in and out of prison, the biggest downfall for me, for a start, is the community around us.

“They don’t have to say anything, but the way they look at you and talk about you. And there’s nothing good about it, it’s all bad things they say, but I don’t blame them for that because we did bad things.

“Being in there inside we are together as one, but when you come out, you’re alone and to make it worse the real world is out here.”

Not being a Cook Islander, Mr X has no family – apart from his partner and their three children.

“For myself I have no family I’m not from here - at times I felt like that’s the first thing I need… And when I see Cook Islanders the way they look at me, I think you got the same bad stuff I have, people have the bad stuff I have. Why do they deny them (the boys inside), they made mistakes.

“That’s why I say this Group is perfect. When the boys come out and their family deny them, this is something for them to turn to.

“For 17 years, no one’s done this before like this Group. I’m going to be behind this Group 100 per cent and watch them grow.” A good supportive turnout from members of the public at the inaugural meeting to form the Second Chance Inc. organization. 21021930.

Mr X says 30 per cent of the “boys” at Arorangi Prison need a roof over their head when they are released.

“For a young guy, he’s more worried about where he’s going to stay than anything else. It’s always been, even the asking around before they are released, even asking a warden - can I stay with you? It’s always been like that.”

Repeat offenders usually don’t have a home, food or a job when they are released, so they begin to roam the streets again, he says.

“Inside there we have food. But outside some only have one meal a day so there’s already a chance or a cause in their mind to commit another crime.”

And he disagrees with talk about educating the boys as soon as they are released.

“If you give them a place, food and a job for three months, man, that’s a big step up, that’s a big help, I’m sure it will make a change.

“I’m not saying it will happen straightaway or it’s going to work, but that’s a point the Group can look at.

“If Second Chance can provide them a place to stay to get them started, they should be ok. If this Group reaches that stage, I’ll die a happy man.”

He admits his troublesome past was more about impressing his friends, “trust me no one forced me to do it. I did crazy things and I end up inside – committing a crime was nothing to me.”

Now a free man, “this time I have no excuses to commit another crime, my kids have grown up and it’s time to do something for them.”

Good with his hands, he considers himself lucky he can get work renovating or building.

On his release, he paid for his own accommodation at $70 a week, he has kept working and now rents a home for $200 a week. ‘It’s a good feeling,” he says.

He can’t help praising the Group, “it’s fantastic it’s the first time I’ve seen something like it, I’d love to see things move.

“Now there’s a hope for people like us coming out, and meeting Terry (Rangi) and other people is positive stuff.

“Even for myself, being around these guys (Second Chance) makes me feel like I got a family and that’s good.”

For the first time, Dorise Tschan has taken on a former inmate, Rima as worker to help with landscaping.

She is immensely proud and appreciative of the work he has done.

Aware of the disapproving and negative attitudes from members of the community, she was happy to voice her support to give released inmates another chance to better their livelihoods.

“It’s the expectance of the work that they do, which is quite sad. Work is just thrown at them and people just expect it to get done,” says Tschan.

“You have to treat the boys like you would want to be treated. They’re quite talented and like to do things efficiently and I’m more appreciative.”

Excited to be a part of Second Chance, she looks forward to the transition and is eager to see their lives change.

Rima has a young family and Tschan worries about them – how they are dealing with school, medical care, clothing, utility bills and so on.

She has reassured Rima that if his family get sick, he does not have to explain himself, “I say to him, just let me know and I’ll help in whatever way I can.

“The basic things become great for them and we will need to give them that, we need to help and support them.”

She has also applied for the wage subsidy for Rima, but has heard nothing back.

“Even if he’s a former inmate, they all should still be given that right for the wage subsidy.

“Already, when you show negativity towards them, they feel it. Who would be willing to show you what they can do to restart their life again when you steal that away from them? They lose the power of wanting to be part of society and that’s how they’ll see themselves for their future.”

Tschan encourages Rima to share what’s on his mind and to ask for help or advice if needed.

She has also delved into her personal experiences to share a bit to him to help him see he is not alone.

“I looked at the downfalls of my own journey. It was the little things I appreciated from someone that stood by me and never gave up on me. So I went ahead and did those things for Rima knowing he would appreciate it.

“I’m so proud of him, I say to him don’t be shy, we’re both in this together. I hope that he does enjoy working for me, so far so good and his work is beyond my expectations.”

Tschan hopes others will take the chance to work with the boys and employ them and to support Second Chance.

“This time they are made to feel part of their future, and appreciation is always the main key for anything.”

President of the Second Chance management board, Ioana Taiki is happy to be part of the team saying “this Group is a tool to enable change in the released inmates for a better livelihood”.

“They have to respect, believe and trust in themselves, if they do that they will focus and have an outcome where they can look after their family, especially their children.”

Taiki says something needs to be done to address and discuss options to support and help with the rehabilitation of inmates.

Aware that it will take some time for the Group to get into gear, Taiki hopes the inmates will now have a better outlook for when they get out.

“I hope that the community will support this, the boys are already out there working in the community and are not sitting around.”

Second Chance’s chief executive Terry Rangi has been in discussions with Mike Williams from the New Zealand Howard League for Penal Reform.

“We’re looking to collaborate, share experiences and establish a Memorandum of Understanding (MOU) with them,” says Rangi. “We will need funding support to set up an office with resources and while that will require some ongoing investment for a period of time, this organisation can be sustainable and generate its own revenue to sustain itself.

“If we don’t do anything the social cost from crime will impact everyone in our community, not to mention the financial cost to businesses and individuals. There is no one simple fix and we can learn from the experiences of Maori and Pacific Islanders in New Zealand.”

If anyone is looking for services to do their lawns and maintenance and want to give former inmates a second chance, contact Terry Rangi at phone 54299.