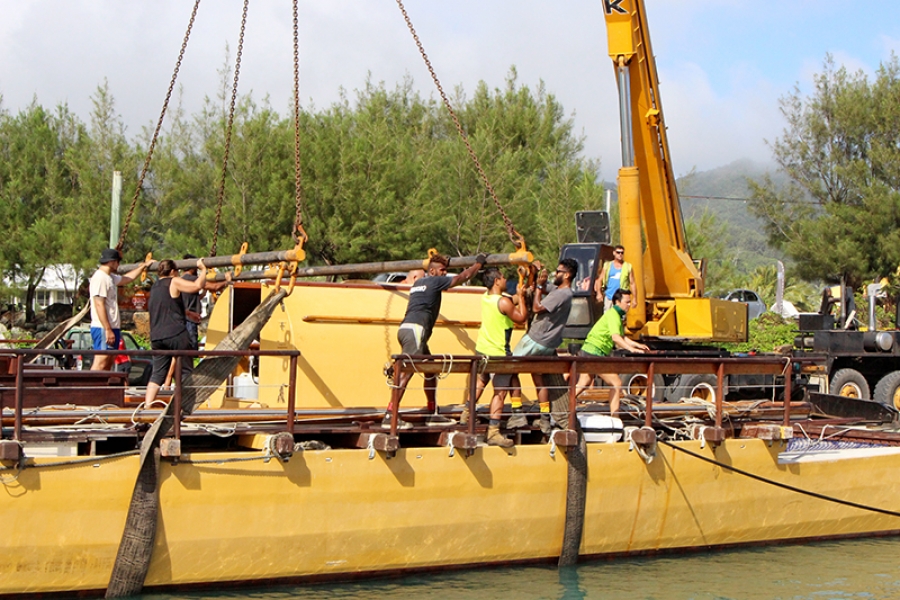 Members of the Cook Islands Voyaging Society prepare Vaka Marumaru Atua for lifting out of the harbour in September following a fire that destroyed one of the canoe's hulls. 17110639

Two options are currently on the table for the repair of Vaka Marumaru Atua’s hull that was severely damaged by fire in early September, says Cook Island Voyaging Society secretary Cecile Marten.

“We have been given a proposal by Esben Torget to fix the vaka here. The other option is to have a new hull built.”

Torget is a Norwegian national living in Rarotonga who has a background in working with major repairs of fibreglass and carbon fibre sailing and motor boats for a number of years before moving to the Cook Islands, says Marten.

And to have it repaired or rebuilt the Society needs significantly more funds than what they have raised so far.

Fundraising efforts through the Voyaging Society’s givealittle webpage is currently sitting at just under $12,000 from 91 donors.

They are still aiming to reach a minimum of $150,000 to move forward with either repair option.

Marten says “We are so grateful for the support we have received so far. And it is heart breaking to see our vaka sit on dryland with an uncertain future. We hope that Government and the people of Cook Islands will realise how important it is to save this national treasure that has sailed around the Pacific to highlight the plight of the Ocean and how we need to do more to protect our ocean resources.”

However, before the society can make an informed decision they are still awaiting an independent assessment on whether or not it can actually be repaired.

Earlier on they were advised by the actual New Zealand based vaka boat builders, who had a staff member do a visual inspection, said that a repair is not recommended. They had advised - due to the extensive fire damage the structural integrity of the vessel has been compromised.

Marten says they also previously thought that the time and hours to go into the vessel and remove glass fibre and foam core of the damaged hull would be counterproductive and better spent on a new hull.

The society has had a naval architect subsequently advise against a repair based on an inspection by Maritime Cook Islands staff, as there would be no guarantee it would ultimately pass maritime certification and insurance requirements.

She says, “Obviously a replacement is the costly option but at the end of the day, the safety of the crew is paramount as is our requirements to have certification and registration to be able to voyage.”

The Society is however not completely ruling out a repair job just yet.

Williams’ role says Marten, will be to assess the current condition of the Vaka and make a recommendation to the Exec of the Cook Islands Voyaging Society if he thinks it can be repaired or not.

Marten says, “If it can be repaired, he would then need to oversee the repairs.

“He has to be convinced that it can be repaired locally and then the costs evaluated with the options being shipping the damaged hull to New Zealand for repair or the local boat builder repairing the hull.

“If the work was done here, he would have to make a number of inspections along the way to ensure that the work is carried out to the highest standards so as to be able to sign off certification.”

In the meantime, she says, “We have been given an estimated cost of work here being around $150K verses a new hull of $300K. It is not an easy decision to make and we need to take emotion out of the decision and make it based on the safety of our crew and vaka rather than cost.”

To donate funds to the repair of Vaka Marumaru Atua go to their webpage at: https://givealittle.co.nz/cause/helpmarumaruatua