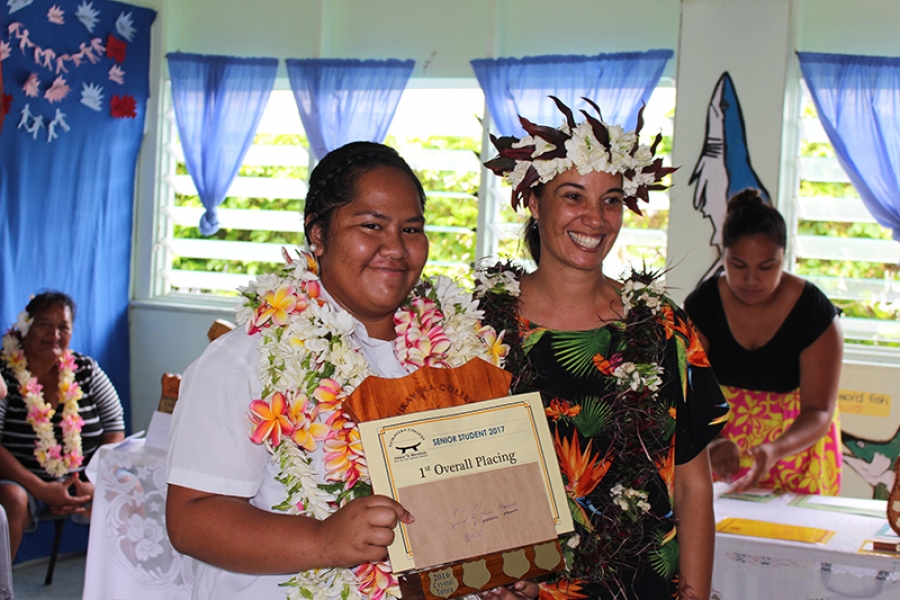 Principal Gaylyn Lockington and teachers of Titikaveka College had plenty of wise words for their pupils at the school’s year 11 prize-giving last Friday.

Students, teachers, and visiting VIPs all packed into a small classroom for the awards ceremony. The tight space however couldn’t contain the student’s excitement as they collected their hard-earned awards.

The room was filled with the strong fragrance of frangipani, tipani and tiare Maori, with students wearing smiles from ear to ear over their many ei, while also receiving many pearls of wisdom for their future success.

Said Lockington: “Learning is for life. Aim for the stars… and to get there, you need to stay in the education system, for the world is your oyster. With God always in your life, all things are possible!”

School committee chairperson Anna Roumanu added: “Your future is based very much on decisions you make for yourself as a young person. So set yourself up for success.”

Already setting herself up for a great future is star student Joseline Ioteva, who took home multiple first place awards in subjects including Cook Islands Maori, English and ICT. She also came second overall in Maths, setting the bar very high for anyone following in her academic footsteps.

The morning’s motivational speech also hit the spot, with students sitting attentively on the edge of their seats listening to Smith, fresh from her Miss World campaign in China.

The successful environmental project manager and beauty queen said she was inspired by many motivational speakers throughout her schooling who helped her become the person she is today. She hoped her message would have that same impact on the future lives of the year 11 students listening to her.

Smith said school wasn’t easy, but shared with the students the secret of her own academic and life success.

She said she pushed through by having a role model, a cousin who was one of the first in her family to make it to university.

“That alone encouraged me to take that first step.”

Smith said she had possessed plenty of ambition growing up, and had a clear idea of what she wanted to achieve when she was older.

“I wanted my dream car, my dream house, I wanted to travel. And how you can get that is by putting in the time right now. Don’t wait until you get to university, you need to do it now…”

She added that a quote that had helped her in all situations was, “Your own worst enemy - is yourself.”

“It’s not up to your teacher, or your parents. At the end of the day it’s up to you, and what you want to achieve in life.”

Smith encouraged the students to get out their comfort zones and push themselves.

“I challenge you all to be the best that you can be. Put in the time and effort now and you’ll go far.”

Titikaveka College’s junior school will have their prize-giving on Wednesday December 13.