The passing of a legend 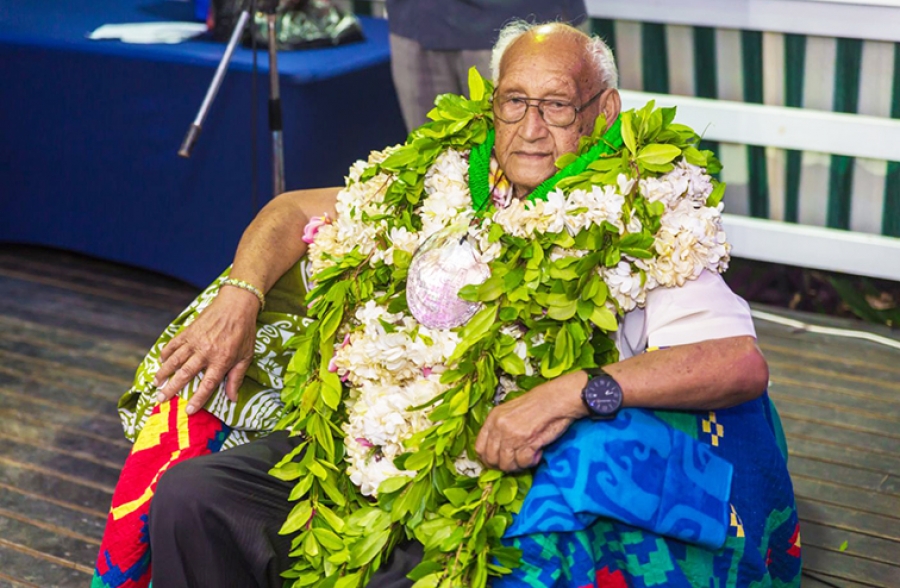 Cook Islands legend and sporting icon Teanuanua Teariki Kamana, OBE, known to most as Papa Dan Kamana, has passed away at the age of 93.

Papa Dan was understood to have been ill for the past few weeks, and died on Saturday morning at Rarotonga Hospital.

His death has prompted an outpouring of grief and tributes from all corners of the Cook Islands community, and several weekend sports fixtures were postponed as a mark of respect for the great man’s passing.

Born on February 9, 1925, to Teariki Kamana Tepuretu and Taputapuatea Makea Tinirau, Papa Dan was sixth in a family of five boys and two girls.

He was married to the late Upoko Tutakiao (Kiriparu Mataiapo of Rangiatea), and the couple had six biological children – three boys and three girls. They also had three feeding children, 25 grandchildren, 37 great-grandchildren and 6 great-great grandchildren.

Papa Dan’s father died when he was five and several people were involved in his upbringing: Tepa Mataiapo of Matavera, Papa Karu Turoa and Mama Ani of Araitetonga, and grandmother Mama Miriama.

Papa Dan had a particularly distinguished sports career, and from 1940-1955 was a welterweight boxing champion. Unfortunately, because of work commitments and financial constraints, he was unable to travel to represent the Cook Islands at the South Pacific Games in Tahiti.

After retiring from boxing at the age of 30, he became a boxing referee for several years, and from 1960 to 1980 he was president of Tupapa Maraerenga Rugby Club. In 1977 he travelled to New Zealand with rugby and netball teams.

Papa Dan was a founding member of the Cook Islands Golden Oldies in cricket and rugby, travelling to New Zealand in 1987 to play in the Golden Oldies rugby tournament. From 1940-1960 he also excelled in tennis and was a men’s singles tennis champion.

In 1994 he participated in the Commonwealth Games in Victoria, Canada, and also travelled to the 1996 World Games in Adelaide, Australia.

Also in 1994, Papa Dan was honoured with the Order of the British Empire (OBE), and in 2004 he was inducted into the Hall of Fame for his contribution to sports and the community.

CINews will have more on Papa Dan Kamana and his contribution to the Cook Islands later this week.