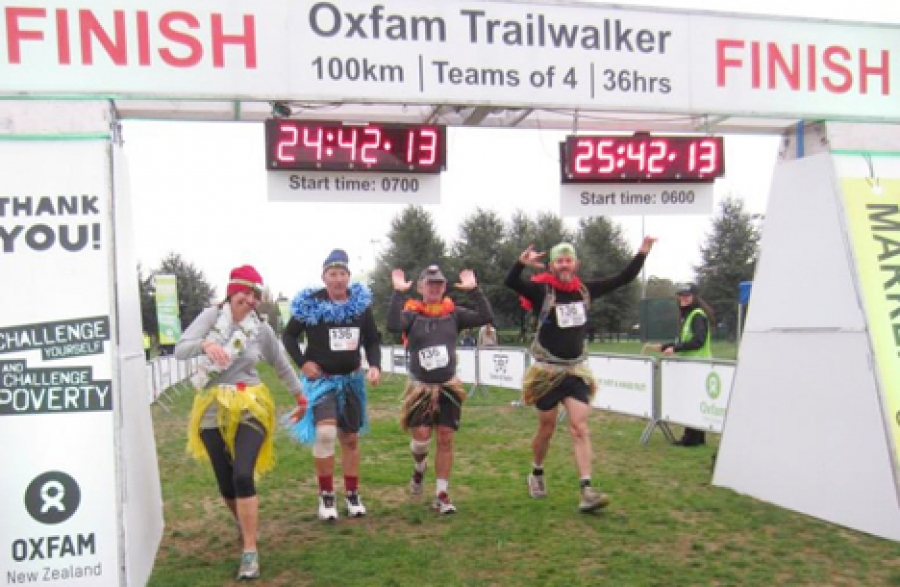 The 'Rarokiwi Flyers' made up of Peter Heays, Julie McKinnon, Blaire McKinnon, and Len Edwards as they cross the fi nish line to end the Oxfam Trailwalker 100km Challenge in Taupo, New Zealand.

The Cook Islands were represented by Peter Heays and Len Edwards in a 100km challenge to raise money for Oxfam in Taupo, New Zealand last Saturday.

The ‘Rarokiwi Flyers’ were one of 238 teams of four who battled the elements for the annual Oxfam Trailwalker 100km Challenge, aimed at raising funds for Oxfam New Zealand’s campaigns throughout the

The Rarotongan team had been in training for months leading up to the challenge and were joined by Heay’s cousins, Blaire and Julie McKinnon.

They had walked around Rarotonga six times so far this year, so Edwards and Heays were well prepared for the race.

The Rarokiwi Flyers reached the finish line in a respectable 25.5 hours and were placed 110th.

The $3,500 they raised from family and friends went to Oxfam New Zealand’s fundraising efforts for Pacific countries hit by Cyclone Pam.

Peter Heays is no stranger to challenging events like these. In 2013 he was in training for the New York Marathon that at the last minute was cancelled because of a hurricane.

Locals have since seen him compete in two Round Rarotonga races and countless long walks. Last week as part of the Oxfam Trail event, Heays completed the equivalent of two marathons plus 16kms before crossing the finish line.

Len Edwards is well known in the Cook Islands for supporting and organising Hash House Harriers and the Triathlon Association, but is not accustomed to being on the competing side of the fence.

Many local sporting community groups also donated to the Oxfam fundraiser as a sign of appreciation for all Edwards does for the Cook Islands, sporting fraternity.