Prize call was the real thing 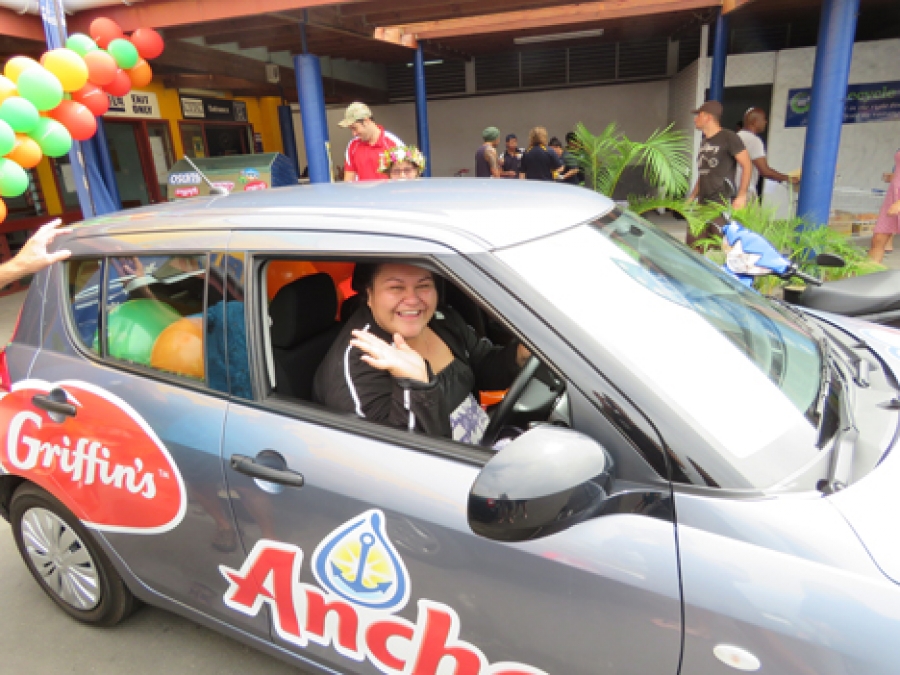 Happy local girl Maru Mariri Tepou about to drive off in her new car on Saturday afternoon. It took three phone calls from contest organisers before the delighted Tepou would believe she had in fact won the vehicle.

When Maru Mariri Tepou received a phone call telling her that she had just won a new car, the 26-year-old thought someone was playing a joke on her.

“My first reaction was, I thought that someone was trying to prank call me,” she says.

Maru Tepou was at home with her two children on Saturday afternoon when she got the phone call saying that she had just won the CITC supermarket’s ‘Win a Car’ competition.

But it took her three phone calls to persuade her to get down to the supermarket and accept that her lucky win was no joke.

The competition began on March 2 and closed on April 30 with a brand new Suzuki Swift up for grabs.

To enter, shoppers at CITC Supermarket had to purchase one item from three of the five supplier-nominated brands – Anchor, Griffins, Watties, Raro, and Sudso.

Fonterra sales manager Bhavya Vujcich flew in from New Zealand to draw the winner’s name under police supervision on Saturday, May 2 at the CITC supermarket.

CITC key brands manager George George says it is the first time in four years that the winner has come down to the supermarket on the day the competition was actually drawn, to take the prize home.

Tepou works at Turama House in the destination management department, is married to Tepou Vaevae, and is kept extra busy as the mother of two young children.

Her prize is also her first car and says she is very thankful for the unexpected win, as the vehicle will come in handy for herself and her young family.

Tepou is a frequent shopper at CITC supermarket and says that winning this car was a blessing as she had only made a single entry to the competition.

She will be returning to the supermarket today to find out about some of the other great prizes that come with winning the car.

“Continue to enter and you could be as lucky as Maru Mariri Tepou and win yourself some incredible prizes.”