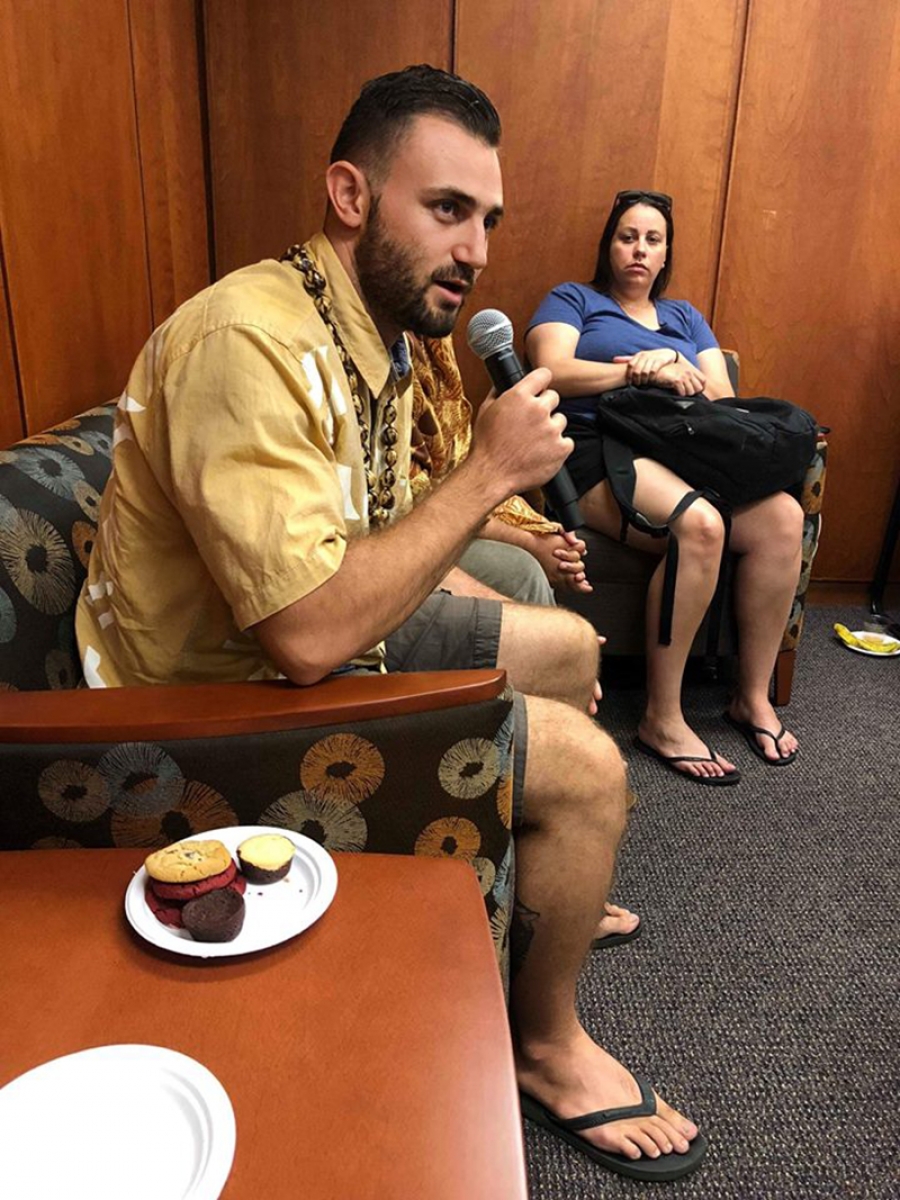 Liam Kokaua quizzes Matthew Matthews of the Bureau of East Asian and Pacific Affairs on US pollution in the Pacific. PHOTO: Facebook 18013013

This month’s Young Pacific Leaders Conference in Hawaii was a life-changing experience for Te Ipukarea Society project officer Liam Kokaua, giving him skills he hopes to use to the benefit of the Cook Islands.

Kokaua, who returned from the summit last week, said that he was unable to sleep for three days afterwards as he was still buzzing from the experience.

“It was pretty amazing. It was better than I expected it to be, because I was expecting a workshop style conference with an American focus,” Kokaua said.

“But even though it was organised by the States, they really nurtured a strong indigenous aspect to it. All the participants were from the indigenous groups of each country, even three Aboriginals from Australia.”

A kava ceremony was held on the first night, which Kokaua said was the perfect way for a formal event to begin in the Pacific. The young leaders were taken on tours of traditional Hawaiian locations, shown examples of culturally grounded indigenous education and learned about ways they could take advantage of grant money.

The kava ceremony was one of the many ways that the conference fostered and encouraged the indigenous side of the participants to come forward, said Kokaua, which helped the group feel much more at ease.

While all the young leaders were native to the Pacific, not all were familiar with the Cook Islands, and Kokaua found himself being asked questions after giving demonstrations of his culture.

A feeling he got from the conference was that they selected speakers that would inspire the group from an indigenous perspective, with the University of Hawaii’s Dr Johnathan Osorio being a particular standout.

“He wrote an essay about being a Hawaiian in the modern age, and I think we could all relate on an intellectual and spiritual level.

“It also made me realise when hearing his stories, and others like those from the Aborigines from Australia, that we are quite lucky by comparison, as we still have our lands, language and culture.”

He also had a chance to address Deputy Assistant Secretary of the Bureau of East Asian and Pacific Affairs, Matthew Matthews, on US pollution in the Pacific.

Since his return, he has been thinking about ways to take advantage of the standing grant offer, which amounts to US$13,500 (NZ$18,400), in ways that would best benefit the Cook Islands.

One of his ideas, concerns increasing the awareness of the Cook Islands youth about the value of the native language and culture.

Kokaua says he is fascinated by the possibility of collecting and documenting traditional knowledge.

“I want to show how smart our ancestors were. They weren’t stone-age cavemen, they were scientists in their own way,” Kokaua explained. “They had to be, to be such great voyagers.

“If we could highlight what our people know about the environment, harvesting, using nature as a resource, it would be really interesting I think for people to see.”