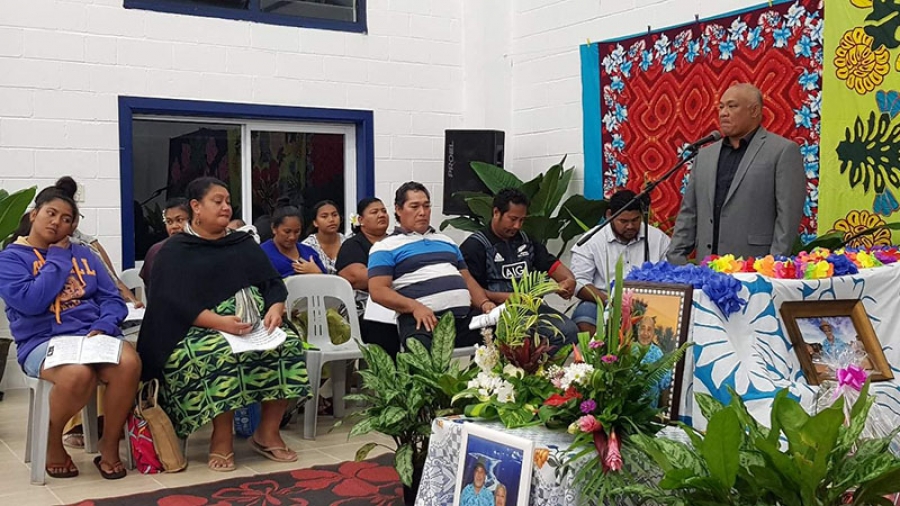 Former Pukapuka/Nassau MP Tekii Lazaro was laid to rest on Wednesday, at the Ngati Arera cemetery in Pokoinu. He had passed away this month, aged 66.

The young men of Wale did a tila to welcome Lazaro’s casket to the burial site where a mako (chant) was performed – an emotional and beautiful ritual to comfort the family; the Pukapuka anthem was also sung.

He was educated at Niua school on Pukapuka, Aitutaki High school, and studied Meteorological training in Fiji and New Zealand.

Lazaro was the Meteorological Officer for more than 28 years, before holding the Parliamentary seat of Pukapuka/Nassau seat from 2010 to 2018.

Lazaro was also a part-time taxi driver until he retired two years ago.

Lazaro loved tennis and earned the nickname “Killer Whale” and “Tatapa”. He enjoyed singing Imene Tukis and was a humourous entertainer.

He was committed to the Nikao Cook Islands Christian Church, as a Sunday school teacher and a Diakono for 10 years.

Following are tributes for Lazaro.

George Tauia: “RIP brother, I’ve had a lot of fond memories of you back in our Pue Young People. Atawai wolo for all you have taught especially the second coming, a great teacher. He was funny at times, but his messages was well presented. He was a great tennis player too.”

His families and wife Mama Dresser Lazaro would like pass on their Atawai wolo to everyone that helped out and visited the family during their bereavement period including the Pukapuka Rarotonga Community, Tawa Lalo Delegation, Manihiki and Rakahanga Henua Delegation, Cook Islands Medical and Dental Association and the Avarua and Nikao Ekalesia.